7.1. A uniform thin sheet of an isotropic, elastic material, of thickness \(t\) and area \(A \gg t^{2}\), is compressed by two plane, parallel, broad, rigid surfaces - see the figure on the right. Assuming no slippage between the sheet and the surfaces, calculate the relative compression \((-\Delta t / t)\) as a function of the compressing force. Compare the result with that for the tensile stress, calculated in Sec. 7. 7.2. Two opposite edges of a thin, very wide sheet of an isotropic, elastic material have been clamped in two rigid, plane, parallel walls that are pulled apart with force \(F\), along the sheet’s length \(l\). Find the relative extension \(\Delta l / l\) of the sheet in the direction of the force, and its relative compression \(\Delta t / t\) in the perpendicular direction, and compare the results with Eqs. (7.45)-(7.46) for the tensile stress and the solution of the previous problem.

7.3. Calculate the radial extension \(\Delta R\) of a thin, long, round cylindrical pipe, due to its rotation with a constant angular velocity \(\omega\) about its symmetry axis (see the figure on the right), in terms of the elastic moduli \(E\) and \(v\). The external pressure both inside and outside the pipe is negligible. 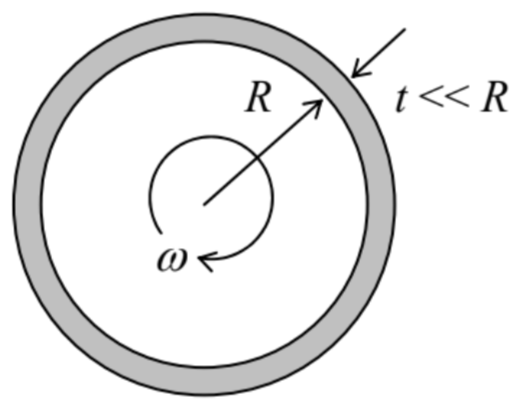 7.4. A long, uniform rail with the cross-section shown in the figure on the right, is being bent with the same (small) torque twice: first within the \(x z\) plane and then within the \(y z\)-plane. Assuming that \(t<<l\), find the ratio of the rail bending deformations in these two cases. 7.5. Two thin rods of the same length and mass are made of the same elastic, isotropic material. The cross-section of one of them is a circle, while the other one is an equilateral triangle - see the figure on the right. Which of the rods is stiffer for bending along its length? Quantify the relation. Does the result depend on the bending plane orientation?

7.6. A thin, elastic, uniform, initially straight beam is placed on two point supports at the same height \(-\) see the figure on the right. What support placement minimizes the largest deviation of the beam from the horizontal baseline, under its own weight?

Hint: An approximate answer (with an accuracy better than \(1 \%\) ) is acceptable.

7.7. Calculate the largest longitudinal compression force \(\mathscr{T}\) that may be withstood by a thin, straight, elastic rod without bucking (see the figure on the right) for two shown cases:

(i) the rod’s ends are clamped, and

(ii) the rod it free to turn about the support points.

7.8. An elastic, light, thin poll with a square cross-section of area \(A=a \times a\), had been firmly dug into the ground in the vertical position, sticking out by height \(h>>a\). What largest compact mass \(M\) may be placed straight on the top of the poll without the stability loss?

7.9. Calculate the potential energy of a small and slowly changing, but otherwise arbitrary bending deformation of a uniform, elastic, initially straight rod. Can the result be used to derive the dispersion relation (136)?

7.10. Calculate the torsional rigidity of a thin, uniform rod whose cross-section is an ellipse with semi-axes \(a\) and \(b\).

7.11. Calculate the potential energy of a small but otherwise arbitrary torsional deformation \(\varphi_{z}(z)\) of a uniform, straight, elastic rod.

7.13. The coil spring, described in the previous problem, is now used as what is sometimes called the torsion spring - see the figure on the right. Find the corresponding spring constant \(d \tau / d \varphi\), where \(\tau\) is the torque of the external forces relative to the center of the coil (point 0 ). 7.17. Define and calculate the wave impedances for (i) tensile and (ii) torsional waves in a thin rod, appropriate in the long-wave limit. Use the results to calculate the fraction of each wave’s power \(\mathscr{P}\) reflected from a firm connection of a long rod with a round cross-section to a similar rod, but with a twice smaller diameter \(-\) see the figure on the right.