When alone in an AC circuit, inductors, capacitors, and resistors all impede current. How do they behave when all three occur together? Interestingly, their individual resistances in ohms do not simply add. Because inductors and capacitors behave in opposite ways, they partially to totally cancel each other’s effect. Figure shows an RLC series circuit with an AC voltage source, the behavior of which is the subject of this section. The crux of the analysis of an RLC circuit is the frequency dependence of \(X_L\) and \(X_C\), and the effect they have on the phase of voltage versus current (established in the preceding section). These give rise to the frequency dependence of the circuit, with important “resonance” features that are the basis of many applications, such as radio tuners. Here \(I_0\) is the peak current, \(V_0\) the peak source voltage, and \(Z\) is the impedance of the circuit. The units of impedance are ohms, and its effect on the circuit is as you might expect: the greater the impedance, the smaller the current. To get an expression for \(Z\) in terms of \(R\), \(X_L\), and \(X_C\), we will now examine how the voltages across the various components are related to the source voltage. Those voltages are labeled \(V_R\), \(V_L\) and \(V_C\) in Figure. Figure \(\PageIndex{2}\): This graph shows the relationships of the voltages in an RLC circuit to the current. The voltages across the circuit elements add to equal the voltage of the source, which is seen to be out of phase with the current.

For each frequency, we use \(Z = \sqrt{R^2 + (X_L - X_C)^2}\) to find the impedance and then Ohm’s law to find current. We can take advantage of the results of the previous two examples rather than calculate the reactances again.

In both cases, the result is nearly the same as the largest value, and the impedance is definitely not the sum of the individual values. It is clear that \(X_L\) dominates at high frequency and \(X_C\) dominates at low frequency.

The reactances vary with frequency, with \(X_L\) large at high frequencies and \(X_C\) large at low frequencies, as we have seen in three previous examples. At some intermediate frequency \(f_0\), the reactances will be equal and cancel, giving \(Z = R\) —this is a minimum value for impedance, and a maximum value for \(I_{rms}\) results. We can get an expression for \(f_0\) by taking

Solving this expression for \(f_0\) yields

Resonance in AC circuits is analogous to mechanical resonance, where resonance is defined to be a forced oscillation—in this case, forced by the voltage source—at the natural frequency of the system. The receiver in a radio is an RLC circuit that oscillates best at its \(f_0\). A variable capacitor is often used to adjust \(f_0\) to receive a desired frequency and to reject others. Figure is a graph of current as a function of frequency, illustrating a resonant peak in \(I_{rms}\) at \(f_0\). The two curves are for two different circuits, which differ only in the amount of resistance in them. The peak is lower and broader for the higher-resistance circuit. Thus the higher-resistance circuit does not resonate as strongly and would not be as selective in a radio receiver, for example. 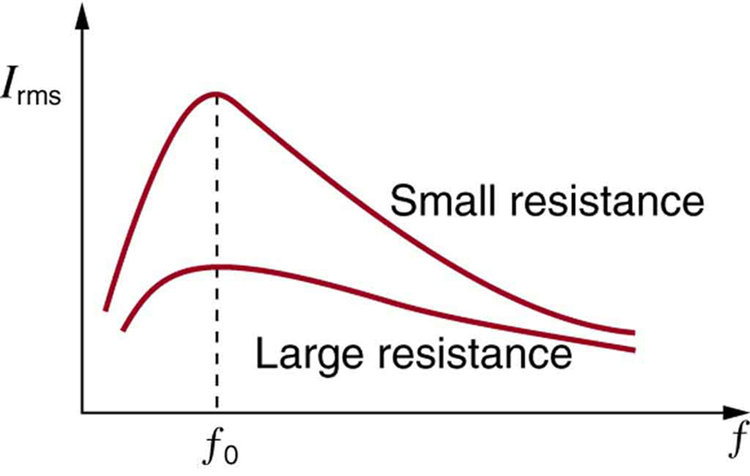 Figure \(\PageIndex{3}\): A graph of current versus frequency for two RLC series circuits differing only in the amount of resistance. Both have a resonance at \(f_0\) but that for the higher resistance is lower and broader. The driving AC voltage source has a fixed amplitude \(V_0\).

The current at that frequency is the same as if the resistor alone were in the circuit.

The current is given by Ohm’s law. At resonance, the two reactances are equal and cancel, so that the impedance equals the resistance alone. Thus,

At resonance, the current is greater than at the higher and lower frequencies considered for the same circuit in the preceding example.

If current varies with frequency in an RLC circuit, then the power delivered to it also varies with frequency. But the average power is not simply current times voltage, as it is in purely resistive circuits. As was seen in Figure, voltage and current are out of phase in an RLC circuit. There is a phase angle \(\phi\) between the source voltage \(V\) and the current \(I\), which can be found from

Strategy and Solution for (a)

The power factor at 60.0 Hz is found from

This small value indicates the voltage and current are significantly out of phase. In fact, the phase angle is

The phase angle is close to \(90^o\), consistent with the fact that the capacitor dominates the circuit at this low frequency (a pure RC circuit has its voltage and current \(90^o\) out of phase).

Strategy and Solution for (b)

Strategy and Solution for (c)

Both the current and the power factor are greater at resonance, producing significantly greater power than at higher and lower frequencies.

Power delivered to an RLC series AC circuit is dissipated by the resistance alone. The inductor and capacitor have energy input and output but do not dissipate it out of the circuit. Rather they transfer energy back and forth to one another, with the resistor dissipating exactly what the voltage source puts into the circuit. This assumes no significant electromagnetic radiation from the inductor and capacitor, such as radio waves. Such radiation can happen and may even be desired, as we will see in the next chapter on electromagnetic radiation, but it can also be suppressed as is the case in this chapter. The circuit is analogous to the wheel of a car driven over a corrugated road as shown in Figure. The regularly spaced bumps in the road are analogous to the voltage source, driving the wheel up and down. The shock absorber is analogous to the resistance damping and limiting the amplitude of the oscillation. Energy within the system goes back and forth between kinetic (analogous to maximum current, and energy stored in an inductor) and potential energy stored in the car spring (analogous to no current, and energy stored in the electric field of a capacitor). The amplitude of the wheels’ motion is a maximum if the bumps in the road are hit at the resonant frequency. Figure \(\PageIndex{4}\): The forced but damped motion of the wheel on the car spring is analogous to an RLC series AC circuit. The shock absorber damps the motion and dissipates energy, analogous to the resistance in an RLC circuit. The mass and spring determine the resonant frequency.

A pure LC circuit with negligible resistance oscillates at \(f_0\), the same resonant frequency as an RLC circuit. It can serve as a frequency standard or clock circuit—for example, in a digital wristwatch. With a very small resistance, only a very small energy input is necessary to maintain the oscillations. The circuit is analogous to a car with no shock absorbers. Once it starts oscillating, it continues at its natural frequency for some time. Figure shows the analogy between an LC circuit and a mass on a spring. Figure \(\PageIndex{5}\): An LC circuit is analogous to a mass oscillating on a spring with no friction and no driving force. Energy moves back and forth between the inductor and capacitor, just as it moves from kinetic to potential in the mass-spring system.

Build circuits with capacitors, inductors, resistors and AC or DC voltage sources, and inspect them using lab instruments such as voltmeters and ammeters.

impedance
the AC analogue to resistance in a DC circuit; it is the combined effect of resistance, inductive reactance, and capacitive reactance in the form \(Z=\sqrt{R^2+(X_L−X_C)^2}\)

phase angle
denoted by \(ϕ\), the amount by which the voltage and current are out of phase with each other in a circuit

power factor
the amount by which the power delivered in the circuit is less than the theoretical maximum of the circuit due to voltage and current being out of phase; calculated by (cosϕ\)