Before we go any further, however, let's define these new concepts more clearly.

In simple English, torque measures the twist applied to an object. The question remains, however, how do we quantify twist? Let's examine a common device used to generate twist, a wrench. The magnitude, location, and orientation of the force applied to the wrench by the person's hand are indicated. Each of these three parameters effects the amount of twist the person delivers to the wrench (and therefore to the bolt).

If the preceding paragraph makes sense to you, you understand how to quantify torque. To maximize torque, you should:

Mathematically, this is summarized by: 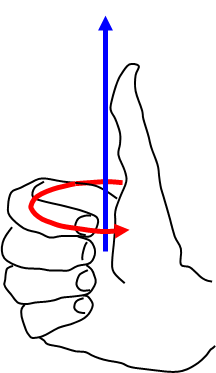 We have constructed a rotatinal analogy to Newton's second law,

Our next task is to better define what we mean by I, the rotational inertia.

For example, it would be easier to get the smaller dumbbell spinning than the larger dumbbell, even though they have the same total mass. Enough with the "plausibilities", let's finally just define the rotational inertia to be:

In summary, we now have quantitative relationships for measuring torque and rotational inertia,

and the hypothesis that these two quantities are related in a manner analogous to Newton's second law,