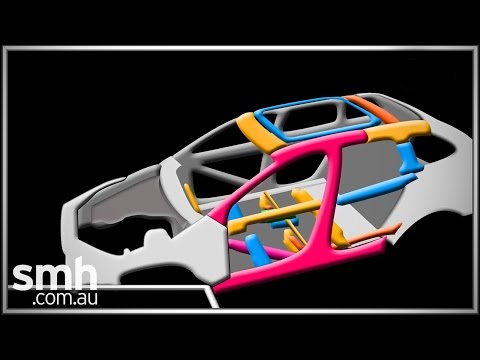 A YouTube element has been excluded from this version of the text. You can view it online here: openoregon.pressbooks.pub/bodyphysics/?p=2309

Crumple zones built into modern cars also serve the purpose of reducing force by increasing the collision time. Crumple zones cause cars to be totaled more often, but cars can be replaced and people can’t be. Notice that the presenter in the previous video isn’t talking about impulse or momentum, but he does keep mentioning absorbing energy. This energy that he is claiming will be absorbed by the crumple zone is the energy stored in the motion of the car. Any moving object has this type of energy, known as kinetic energy (KE). The amount of kinetic energy an object has depends on its mass and its speed:

Notice that the kinetic energy depends on speed, but not velocity because KE doesn’t have a direction (an object can’t have negative KE). Even if we input a negative velocity into the KE equation, it gets squared so KE would come out positive anyway. The SI unit of kinetic energy is a Nm, which has it own name, the Joule (J).

What is the kinetic energy of a person with 65 kg mass running with a speed of 10 m/s?

What is the kinetic energy of a meteorite with 100x less mass than the person above, but entering the atmosphere at 100x greater speed (0.65 kg and 1000 m/s)?

Which is larger, the KE of the runner or the meteorite?

What matters more in determining kinetic energy, mass or speed?