A uniform plane wave is obliquely incident on the planar boundary between two semi-infinite material regions. In Section 5.8, it is found that

where “\(r\)” in the subscripts indicates the relative (unitless) quantities. The associated formula for \(\psi^t\) explicitly is:

From Equation \ref{m0169_eAt}, it is apparent that when \(\mu_{r1}\epsilon_{r1}>\mu_{r2}\epsilon_{r2}\), \(\psi^t>\psi^r\); i.e., the transmitted wave appears to bend away from the surface normal, as shown in Figure \(\PageIndex{1}\). In fact, \(\psi^t\) can be as large as \(\pi/2\) (corresponding to propagation parallel to the boundary) for angles of incidence which are less than \(\pi/2\). What happens if the angle of incidence is further increased? When calculating \(\psi^t\) using Equation \ref{m0169_eAt}, one finds that the argument of the arcsine function becomes greater than 1. Since the possible values of the sine function are between \(-1\) and \(+1\), the arcsine function is undefined. Clearly our analysis is inadequate in this situation.

To make sense of this, let us begin by identifying the threshold angle of incidence \(\psi^i_c\) at which the trouble begins. From the analysis in the previous paragraph,

This is known as the critical angle. When \(\psi^i<\psi^i_c\), our existing theory applies. When \(\psi^i\ge\psi^i_c\), the situation is, at present, unclear. For non-magnetic materials, Equation \ref{m0169_eCA} simplifies to

where \(B\) is a positive real-valued number. Now we may write Equation \ref{m0169_eGTE} as follows:

where \(A\triangleq\cos\psi^i\) is also a positive real-valued number. Note that the numerator and denominator in Equation \ref{m0169_eGTE2} have equal magnitude. Therefore, the magnitude of \(\left|\Gamma_{TE}\right|=1\) and

When the angle of incidence \(\psi^i\) exceeds the critical angle \(\psi^i_c\), the magnitude of the reflection coefficient is 1. In this case, all power is reflected, and no power is transmitted into the second medium. This is total internal reflection.

Although we have obtained this result for TE component, the identical conclusion is obtained for TM component as well. This is left as an exercise for the student. 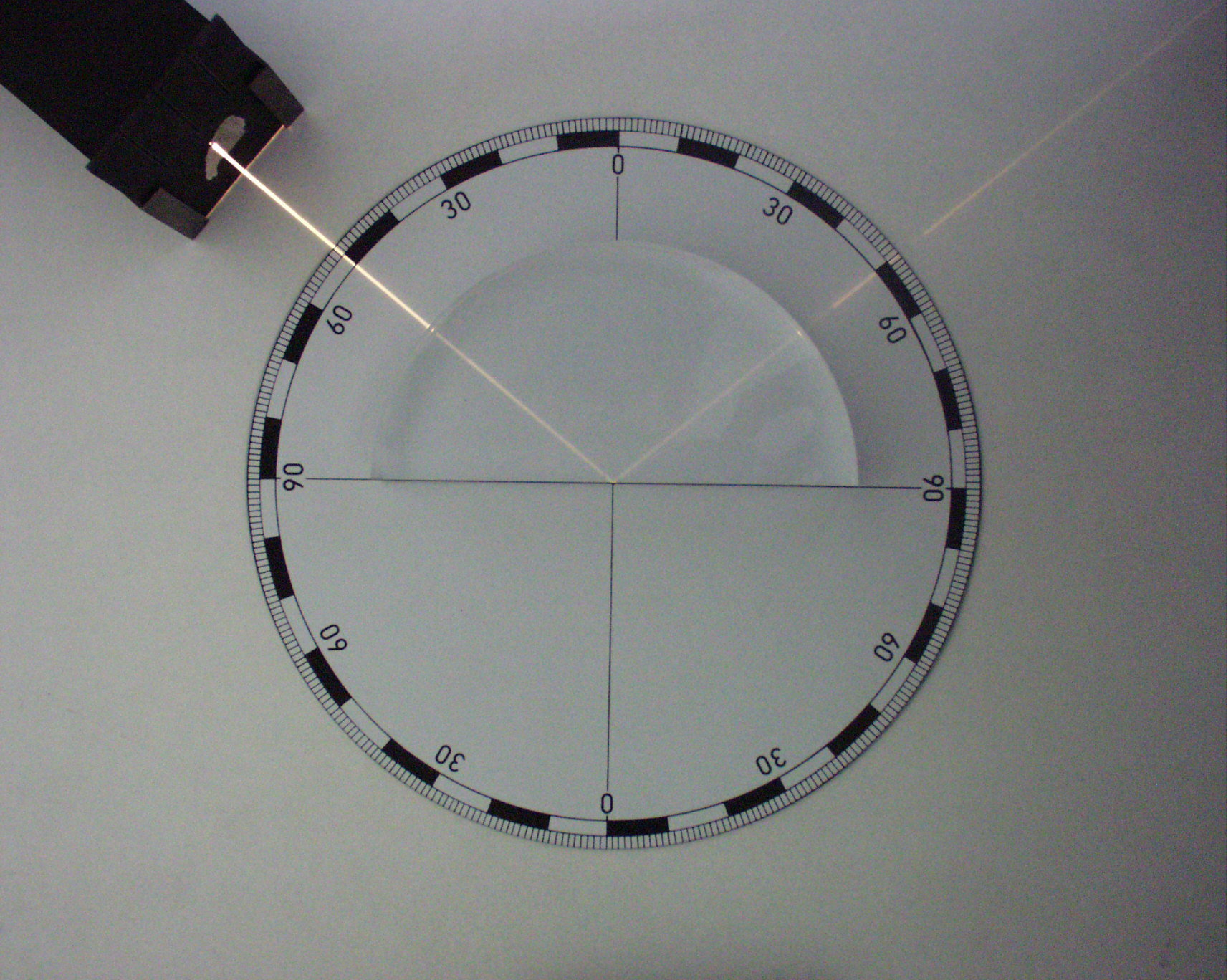 Note also that the phase \(\zeta\) of the reflection coefficient is precisely zero unless \(\psi^i>\psi^i_c\), at which point it is both non-zero and varies with \(\psi^i\). This is known as the Goos-Hänchen effect. This leads to the startling phenomenon shown in Figure \(\PageIndex{3}\). In this figure, the Goos-Hänchen phase shift is apparent as a displacement between the point of incidence and the point of reflection.

The presence of an imaginary component in the reflection coefficient is odd for two reasons. First, we are not accustomed to seeing a complex-valued reflection coefficient emerge when the wave impedances of the associated media are real-valued. Second, the total reflection of the incident wave seems to contradict the boundary condition that requires the tangential components of the electric and magnetic fields to be continuous across the boundary. That is, how can these components of the fields be continuous across the boundary if no power is transmitted across the boundary? These considerations suggest that there is a field on the opposite side of the boundary, but – somehow – it must have zero power. This is exactly the case, as is explained in Section 5.12.