There is more structure in Figure 4.3.1 than just a simple linear dependence on \(A\). A naive analysis suggests that the following terms should play a role:

Illustration of the terms of the semi-empirical mass formula in the liquid drop model of the atomic nucleus. Image used with permission (CC BY-SA; Daniel FR).

Taking all this together we fit the formula

to all know nuclear binding energies with \(A\geq 16\) (the formula is not so good for light nuclei). The fit results are given in Table \(\PageIndex{1}\). Figure \(\PageIndex{1}\): Difference between fitted binding energies and experimental values (color), as a function of \(N\) and \(Z\).

In Table \(\PageIndex{2}\) we show how well this fit works. There remains a certain amount of structure, see below, as well as a strong difference between neighbouring nuclei. This is due to the superfluid nature of nuclear material: nucleons of opposite momenta tend to anti-align their spins, thus gaining energy. The solution is to add a pairing term to the binding energy,

The results including this term are significantly better, even though all other parameters remain at the same position, see Table \(\PageIndex{2}\). Taking all this together we fit the formula 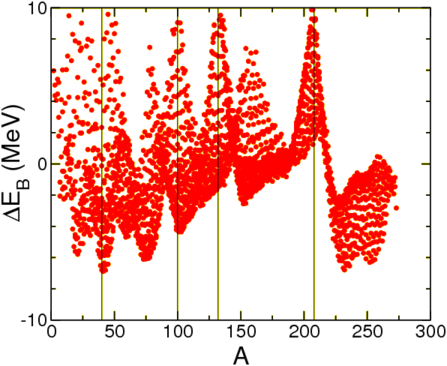