By definition, a simple pendulum consists of a particle of mass m suspended by a massless unstretchable string of length L in a region of space in which there is a uniform constant gravitational field, e.g. near the surface of the earth. The suspended particle is called the pendulum bob. Here we discuss the motion of the bob. While the results to be revealed here are most precise for the case of a point particle, they are good as long as the length of the pendulum (from the fixed top end of the string to the center of mass of the bob) is large compared to a characteristic dimension (such as the diameter if the bob is a sphere or the edge length if it is a cube) of the bob. (Using a pendulum bob whose diameter is 10% of the length of the pendulum (as opposed to a point particle) introduces a 0.05% error. You have to make the diameter of the bob 45% of the pendulum length to get the error up to 1%.)

If you pull the pendulum bob to one side and release it, you find that it swings back and forth. It oscillates. At this point, you don’t know whether or not the bob undergoes simple harmonic motion, but you certainly know that it oscillates. To find out if it undergoes simple harmonic motion, all we have to do is to determine whether its acceleration is a negative constant times its position. Because the bob moves on an arc rather than a line, it is easier to analyze the motion using angular variables. The bob moves on the lower part of a vertical circle that is centered at the fixed upper end of the string. We’ll position ourselves such that we are viewing the circle, face on, and adopt a coordinate system, based on our point of view, which has the reference direction straight downward, and for which positive angles are measured counterclockwise from the reference direction. Referring to the diagram above, we now draw a pseudo free-body diagram (the kind we use when dealing with torque) for the string-plus-bob system. 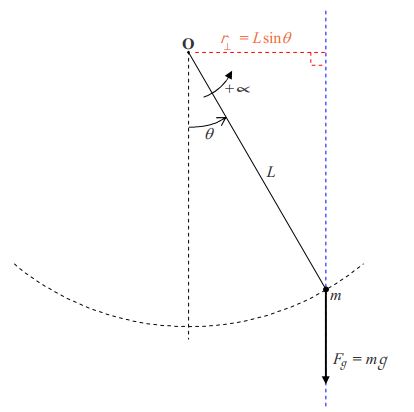 We consider the counterclockwise direction to be the positive direction for all the rotational motion variables. Applying Newton’s 2nd Law for Rotational Motion, yields:

Here comes the part where we treat the bob as a point particle. The moment of inertia of a point particle, with respect to an axis that is a distance \(L\) away, is given by \(I=mL^2\). Substituting this into our expression for \(\propto\) we arrive at:

Something profound occurs in our simplification of this equation. The masses cancel out. The mass that determines the driving force behind the motion of the pendulum (the gravitational force \(F_g=mg\) ) in the numerator, is exactly canceled by the inertial mass of the bob in the denominator. The motion of the bob does not depend on the mass of the bob! Simplifying the expression for \(\propto\) yields:

Solving this for \(f\), we find that the frequency of oscillations of a simple pendulum is given by

Again we call your attention to the fact that the frequency does not depend on the mass of the bob!

\(T=\frac{1}{f}\) as in the case of the block on a spring. This relation between \(T\) and \(f\) is a definition that applies to any oscillatory motion (even if the motion is not simple harmonic motion).

Let’s return our attention to the block on a spring. A person pulls the block out away from the wall a distance \(x_{max}\) from the equilibrium position, and releases the block from rest. At that instant, before the block picks up any speed at all, (but when the person is no longer affecting the motion of the block) the block has a certain amount of energy \(E\). And since we are dealing with an ideal system (no friction, no air resistance) the system has that same amount of energy from then on. In general, while the block is oscillating, the energy

An endpoint in the motion of the block is a particularly easy position at which to calculate the total energy since all of it is potential energy.

with the kinetic energy \(K\) increasing and the potential energy \(U\) decreasing. Eventually the block reaches the equilibrium position. For an instant, the spring is neither stretched nor compressed and hence it has no potential energy stored in it. All the energy (the same total that we started with) is in the form of kinetic energy, \(K=\frac{1}{2}mV^2\).