Consider a region of space in which there exists an electric field. Focus your attention on a specific point in that electric field, call it point \(A\). In terms of the electric potential \(\varphi\) , \(U = q\varphi\) so the work can be expressed as 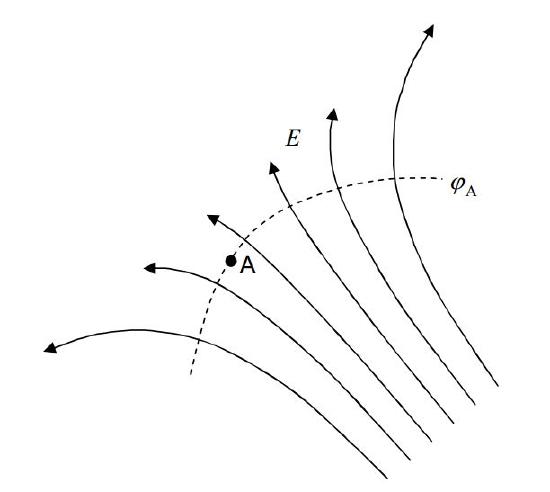 Perfect Conductors and the Electric Potential

A hollow metal sphere is at a potential that is \(472\) volts higher than that of a nearby metal plate. A particle of charge \(2e\) is released from rest at the surface of the sphere. It subsequently strikes the plate. With what kinetic energy does the charged particle strike the plate? (Assume that the only force acting on the particle is that due to the electric field corresponding to the given information.)

Analogy Between Voltage and Altitude

One can draw a pretty good analogy between voltage (electric potential) and altitude. Consider a particular altitude above the surface of the earth (measured, for instance, from sea level). The value of the altitude characterizes a point in space or a set of points in space. In fact, the set of all points in space that are at the same altitude above the surface of the earth forms an “equi-altitude” surface. On a local scale, we can think of that “equi-altitude” surface as a plane. On a global scale, looking at the big picture, we recognize it to be a spheroidal shell. Flocks of birds can be at that altitude and when they are, we attribute the altitude to the flock of birds. We say that the flock of birds has such and such an altitude. But, whether or not the flock of birds is there, the altitude exists. Regarding a particular altitude, we can have birds and air and clouds moving or flowing through space at that altitude, but the altitude itself just exists—it doesn’t flow or go anywhere. This is like the voltage in a circuit. The voltage in a circuit exists. The voltage characterizes a conductor in a circuit. Charged particles can move and flow in and through a conductor that is at that voltage, but, the voltage doesn’t flow or go anywhere, any more than altitude flows or goes anywhere.