Let’s start with a case in which the combination circuit element consists of two capacitors in series with each other: We consider the two capacitors to be a two-terminal combination circuit element: The voltage across each individual capacitor is, however, not known.

But consider this: After that last wire is connected in the circuit, the charging process (which takes essentially no time at all) can be understood to proceed as follows (where, for ease of understanding, we describe things that occur simultaneously as if they occurred sequentially): The final result is that both capacitors have one and the same charge \(q\): 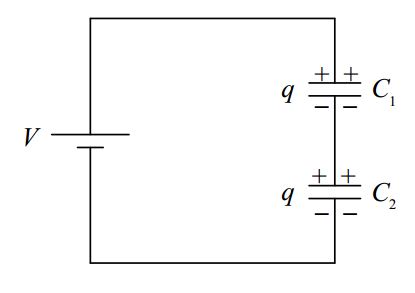 By the loop rule, So, what we’re saying is, that when you put a voltage \(V\) across the two-terminal circuit element By logical induction, we can extend this argument to cover any number of capacitors in series with each other, obtaining:

As far as making things easy to remember, it’s just too bad the way things work out sometimes. This expression is mathematically identical to the expression for resistors in parallel. But, this expression is for capacitors in series.

Suppose we put a voltage \(V\) across a combination circuit element consisting of a pair of capacitors in parallel with each other: To do that, the seat of EMF has to move a total charge of

So, the equivalent capacitance of capacitors in parallel is simply the sum of the individual capacitances. (This is the way resistors in series combine.) By means of inductive reasoning, the result can be extended to any number of capacitors, yielding: