The ear-brain system can be easily fooled in many ways giving rise to what are known collectively as phantom tones. The missing fundamental, described above, is one example of a phantom tone. As another example, under the right circumstances listeners will perceive a frequency which is the difference between two frequencies: \(f=f_{1}-f_{2}\), instead of the two individual frequencies. A similar effect can sometimes occur when the sum of two frequencies is heard instead of the two individual frequencies: \(f=f_{1}+f_{2}\). Since most musical instruments have harmonics and overtones, these combination tones (sometimes called Tartini tones) can have an effect on the timbre of a musical note, both for an individual instrument and for two or more instruments playing together.

The phenomenon of beats, discussed previously, occurs when two notes are close together in frequencies and we perceive one note which varies in loudness. A guitar string can be tuned by comparing a note with a known pitch and tuning the string until the beats disappear. What happens if the two frequencies get further and further apart? If the notes are a little further apart we still hear a single note but it sounds rough or wavering. Eventually we hear two separate notes instead of beats. The range of frequencies where the two frequencies are close enough to cause us to hear a single sound is called a critical band. Notice this is not the same thing as just noticeable difference in frequency. We may still be able to tell one note from another if they played one after the other but when played at the same time our hearing mechanism combines them into a single note. 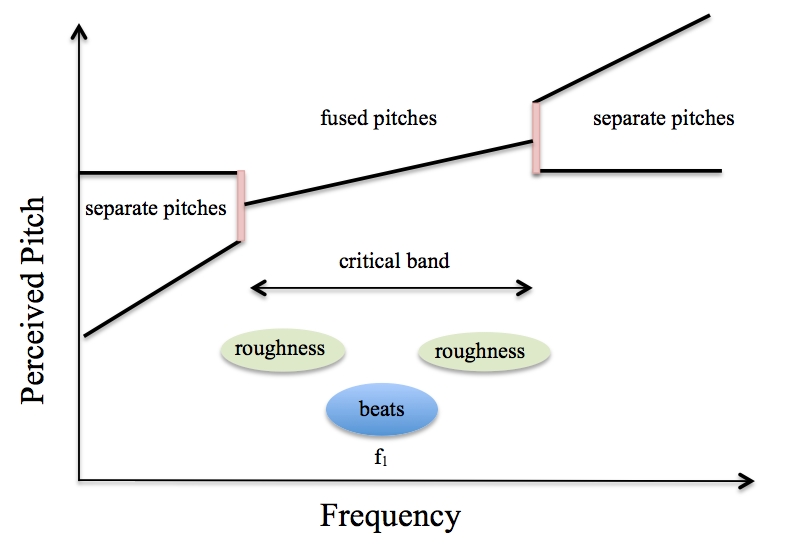 Dissonance is the musical term that is used to describe musical notes that have harmonics close enough to fall in the roughness regime but not close enough to form beats. When two notes are played on a piano an octave apart (the second note has a fundamental exactly twice the fundamental of the first or a \(1\) to \(2\) ratio) all of the harmonics line up and fall on top of each other and there is no dissonance. (For example a \(200\text{ Hz}\) fundamental has harmonics at \(400\text{ Hz}, 600\text{ Hz}, 800\text{ Hz}\), etc. and the note an octave above has frequencies at \(400\text{ Hz}, 800\text{ Hz}\), etc.). However, when a perfect fifth is played (the fundamentals have a \(2\) to \(3\) ratio) the harmonics do not exactly line up. The match of harmonics is worse for harmonics of a minor third (ratio of \(4\) to \(5\)) and progressively worse for a perfect fourth (\(3\) to \(4\) ratio) and minor seventh (\(9\) to \(16\) ratio). If the harmonics fall close enough together there may be beating or roughness which changes the timbre of the combination. This is the primary reason a minor seventh chord does not sound as pleasant to the ears as an octave chord or a perfect fifth; the harmonics produce more roughness in the minor seventh case. The effect is stronger when the harmonics of the instrument are stronger and weaker for instruments with fewer or weaker harmonics.