The membranes that provide structure and definition to cellular compartments are composed of dynamic and heterogeneous lipids whose varying chemical properties allow for their function. The transition between the two main phases of a lipid bilayer, the liquid crystalline phase (Lα) and the gel phase (Lβ) determines how the membrane will behave in terms of fluidity at a particular temperature and the formation of biologically useful membrane microdomains.

Membranes composed of a lipid bilayer can exist in either the liquid or gel phase, depending on the strength of interaction between the molecules. The two phases are quite different in their physical properties and biological relevance.

The Lα, or “liquid” phase, is characterized by more thermal motion than the gel phase. Head groups in the liquid phase are loosely packed with rotational freedom, giving rise to a larger area per molecule at room temperature than observed in the gel phase[1]. The acyl chain tails are not rigid or efficiently packed due to the presence of “kinks” caused by gauche orientation of the alkane chain.
In the liquid phase, phospholipid molecules can move freely in the X and Y axis, but distance between the bilayers (the Z axis direction) is shorter in than in the gel phase, as would be expected due to the kinks in the hydrophobic tails[2]. The presence of gel phase domains within the bilayer can inhibit the lateral diffusion of liquid phase molecules[3].

In the Lβ phase, or “gel” phase, acyl chain tails are fully extended and a uniform trans orientation is present for the length of the alkyl chain. This gives the gel phase a longer Z axis, or length, because the acyl chains are more rigid and straight.
Tightly packed head groups result in a lower area per molecule at room temperature than in the liquid phase[1].

The Austrian physicist Paul Ehrenfest provided a definition for phase transitions, where phase behavior is described in terms of free energy (ΔG) as a function of different thermodynamic variables. The “order” is the derivative of ΔG (as a function of some physical or chemical variable) and the point at which it is discontinuous is the point of phase change[4].

Physical state phase changes, such as the transition between a solid, liquid, gas (or liquid to gel state of a lipid bilayer) are first order phase transitions because they are discontinuous in density at their Tm, which is the first derivative of ΔG with respect to chemical potential. A simplified diagram of phase change

The heat flow required for a first order phase change can be modeled as TΔS. Plotting heat flow versus temperature shows intuitively the energy required for phase transition, with an integral of the curved area representing the free energy of the process: The close packing of the gel phase is accomplished in part by the long and straight acyl chains. These chains are kept straight and rigid by the trans orientation of the alkane chain. During phase transitions, the acyl chain portion of the phospholipid hydrophobic tail undergoes a trans-gauche isomerization produces kinks, a shorter and skewed tail, and leads to less efficient packing[6].

Biologically relevant membranes exist as complex mixtures of different lipids with varying melting temperatures. As a fraction of the membrane reaches its phase transition temperature (Tm) a mixed phase will exist with a heterogenous mixture of liquid and gel phases. Should a sufficient amount of mixed phase exist, a substantial amount of lipid molecules may become exposed to an aqueous environment as the liquid phase molecules will be shorter in the Z axis than the gel phase, making the membrane thinner and exposing a portion of the hydrophobic tails of adjacent phospholipid molecules. This phenomenon is known as “Hydrophobic mismatch” and is the driving force for phase separation. Thus, the disparity of phase transition temperatures in complex lipid mixtures of a lipid bilayer can be thought of as a driving force for phase separation and microdomain formation[7].

Lipids undergo temperature specific phase transitions from liquid crystalline to gel phase. The specific temperature at which this transition occurs is referred to as Tm and varies depending on the specific molecule. Lipid molecules with longer acyl chains tend to have higher Tm than shorter tailed phospholipids because the longer tail provides more opportunity for Van der Waals interactions to occur between two adjacent molecules, lowering over all energy and requiring more thermal energy to reach the point of phase transition and making the phospholipid more likely to exist in the gel phase[5].

In addition to the acyl tail, the lipid headgroup also influences phase behavior. The size of the headgroup is thought to have a strong influence on Tm. Glycocylated head groups have been shown to exhibit less hydrogen bonding than normal phosphatidylcholine resulting in a more fluid and flexible membrane[9]. Somewhat related, the surrounding pH and the hydration of the membrane can also affect Tm, with lower pH and higher hydration state resulting in a higher Tm for the same lipid composition by affecting the hydrogen bonding between the lipid components[10]. 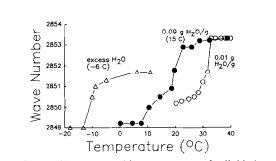 Differential scanning calorimetry (DSC) is a technique that can be used to measure phase transitions in lipid samples and even in simple cells like intact bacteria[12]. DSC works by measuring the amount of heat energy required to raise the temperature of the sample. By slowly ramping the temperature of the sample and accurately measuring temperature change, DSC can determine phase transition phases. By conducting a DSC scan in both directions, hysteresis can be identified.

Fourier transform infrared spectroscopy (FTIR) is a powerful technique that can provide a wealth of information about lipid structure, membrane organization and phase behavior[13]. FTIR detects the absorbance of IR type light emission, which at certain wavelengths is absorbed by different carbon-carbon bonds. From FTIR absorbance spectra, information about lipid conformation can be extrapolated. For example, the phase transition from gel to liquid phase represent change from a more ordered to a more disordered state; the disordered state provides for more rotational and vibrational freedom of the lipid molecules, which is accompanied by a broadening of the IR absorbance of the higher energy molecule[14]. It has been used to find Tm of intact cells, including human platelets[15]. Packing defects of the lipid bilayer can lead to leakage during phase transition the formation of microdomains that occurs as consequence of phase separation can alter the curvature and fluidity of the membrane, which can impart new biological characteristics to the plasma membrane, tonoplast or a vesicle. In addition, protein movement through the membrane can be impaired, or a protein could be restricted to a lipid environment in which it does not optimally function.[16]

Myelin is a notable exception to the general rule that lipids are fluid during physiological temperatures. In persons with multiple sclerosis, the Tm of myelin is lowered by 20°C[17], altering the physical properties of neuronal myelin sheath and possibly causing increased susceptibility to degradation[18].