Here we will introduce you to a physical system that is a beautiful gift of nature: the plasma that existed from the first fractions of a second of the Big Bang until it transitioned to a neutral gas 380,000 years later. Gently disturbed away from equilibrium by mysterious, very early-universe processes, the plasma is an unusually simple, natural dynamical system. Due to its simplicity, we can calculate the evolution of these disturbances with high accuracy and use these calculations to predict observable consequences. The agreement between our predictions and precision observations is extraordinary, allowing us a high degree of confidence that we understand in detail events that were transpiring 14 billion years ago, throughout the cosmos, as far away as the edge of the observable universe.

The simplicity of this system is perhaps best understood in contrast to other natural systems. Naturally occurring phenomena are usually too complicated to understand fully from first principles. We know the underlying physics, but the equations are really complicated to solve, and we’d need an absurd amount of data to narrow down from the set of all possible solutions of the equations, to the one that is actually being realized with the phenomenon in question. Examples of complicated phenomena are supernova explosions, earthquakes, and human behavior. We think we know the underlying physics at play, but getting from there to predictions for observations is extremely difficult, if not impossible.

Usually, to observe a system for which we can make predictions, we need to carefully construct the system ourselves. We call such carefully constructed scenarios, ‘experiments.’ Although the exception rather than the rule, there are examples of naturally occurring systems that are amenable to our understanding. The solar system is such a naturally occurring system, with its simplicity arising from the fact that gravity is the dominantly important force, and the high accuracy of the simplifying approximation of the planets and stars as point masses. The simplicity of this system, and the regularity of the passage of the planets and Sun across the sky may have, in fact, played an important role in the discovery of science itself, as argued by Steven Weinberg in To Explain the World: The Discovery of Modern Science.

Another such simple system is this early plasma, often called the primordial plasma. We are motivated to share with you our observations of the  sky at millimeter to sub-millimeter wavelengths (observations that reveal patterns in this plasma just as it  disappeared about 14 billion years ago) and the remarkable agreement of the statistical properties of these observations with our calculations. To fully appreciate this agreement, we will introduce you to some fundamental aspects of how those calculations are done.

The wave equation, its solutions, and Fourier analysis play key roles in our analysis of the dynamics of the plasma. We will introduce Fourier decomposition, and its utility for solving for the time evolution of a medium disturbed away from equilibrium. We’ll do so at first in the more familiar medium of a guitar string. Our presentation is set at a level we think will work well for physics majors in their 3rd and 4th years. We assume some prior exposure to wave mechanics and Fourier analysis, but we do not assume full familiarity with these subjects. A side benefit of our analysis here will be, for the student, a deepened understanding of the use of Fourier analysis, which is a technique with broad utility across the subject of physics.

In ‘The Primordial Plasma,’ we will introduce the primordial plasma and how observing the sky in millimeter to sub-millimeter wavelengths allows us to see the plasma just as it disappears by transitioning to a neutral gas. In this section we will also see the extraordinary agreement between the statistical properties of maps of the CMB and our predictions for these statistical properties, predictions that follow from our understanding of the dynamics of the plasma. Our chief goal with this chapter and the next is to give you a qualitative understanding of those predictions. Before presenting those predictions, we introduce in this chapter a statistical property of CMB maps called  a 'power spectrum.' In the next chapter, in ‘Waves in the Plasma’ we will model the plasma as a fluid and introduce a simple version of the dynamical equation that governs the evolution of its density, a wave equation. In ‘Solutions to the Wave Equaton’ we will review solutions to the wave equation, and the benefits of Fourier decomposition for evolving a system governed by such an equation. Then we will work out the prediction of the main qualitative feature of the spectrum -- the existence of a series of peaks. 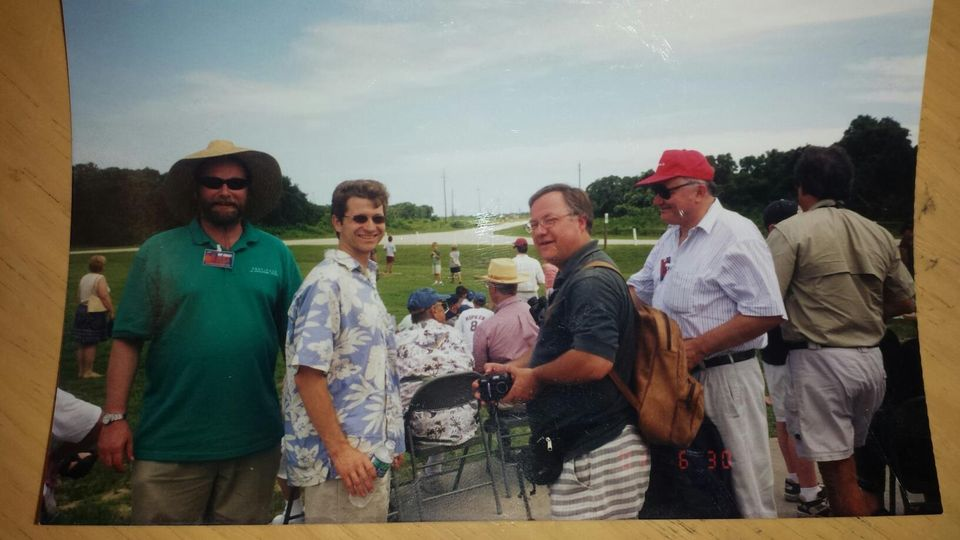 Before we fully begin, let me digress with one bit of history here related to the prediction of this series of peaks and their detection. On the left is a photo I took at the June 30, 2001 launch of the Wilkinson Microwave Anisotropy Probe (WMAP). From left to right are four fellow theorists:  Ned Wright, Neil Cornish, Dick Bond, and Rashid Sunyaev. Despite Rashid’s significant contributions to the field many of us, including me, had not met him before.  Dick Bond was ever-present at Rashid’s side, introducing him to people saying, "This is Rashid Sunyaev, as in Sunyaev-Zel'dovich" like he was bringing you in on some funny joke, as everyone in my field knows of something we call the Sunyaev-Zel’dovich effect. One couldn't help but smile in response. Rashid, meanwhile, was quite emotional, telling me that his advisor (Zel'dovich) had told him, "This is beautiful physics, but it will never be observed. Work on something else now." I was so ignorant of the history, I only realized later he was talking about their 1967 work that was the first to point out that there would be acoustic peaks in the power spectrum of the CMB. We've now measured those peaks with very high precision. The WMAP satellite launched that day worked spectacularly well and was a big step forward in our measurements of the CMB. The launch was a joyful occasion.

A plasma is a state of matter in which electrons are dissociated from nuclei. For example, the Sun is a great ball of gravitationally-bound plasma. Plasmas are hot, as it is the thermal energy that keeps the negatively charged electrons from binding with the positively charged nuclei. Plasmas inevitably include photons, since the charged particles (protons and electrons)  accelerate in the electric fields of other charged particles and radiate photons as a result. The primordial plasma was a collection of electrons, hydrogen and helium nuclei, trace amounts of other light nuclei, and photons. It existed before there were any stars, and so before there were any heavier elements that eventually were formed in stars. The formation of helium and other light elements is the subject of the classic popular book by Steven Weinberg, The First Few Minutes, to which we allude with the title of this chapter.

As we have discussed before, the plasma eventually cools sufficiently that the electrons bind with the protons and Helium nuclei, so that the plasma transforms into a neutral gas. The universe becomes transparent and the thermal photons start freely streaming across the universe. Those photons that originated at just the right distance from us, and were headed our way, are arriving now. They give us an image of what the universe was like at the time of this transition in a thin spherical shell around us at a distance of about 46 billion light years that we call the last-scattering surface. Thus we have a means of studying the primordial plasma observationally. We saw maps of the CMB radiation in the previous chapter that revealed the monopole and the dipole. If we remove the monopole and the dipole then the remaining map is dominated by features that correspond to inhomogeneities on this last-scattering surface. A full-sky map of the CMB, as determined by data from the Planck satellite launched in 2009, is shown below. Planck flew later than WMAP but had higher angular resolution, increased sensitivity, and mapped the sky over a broader range of frequencies. 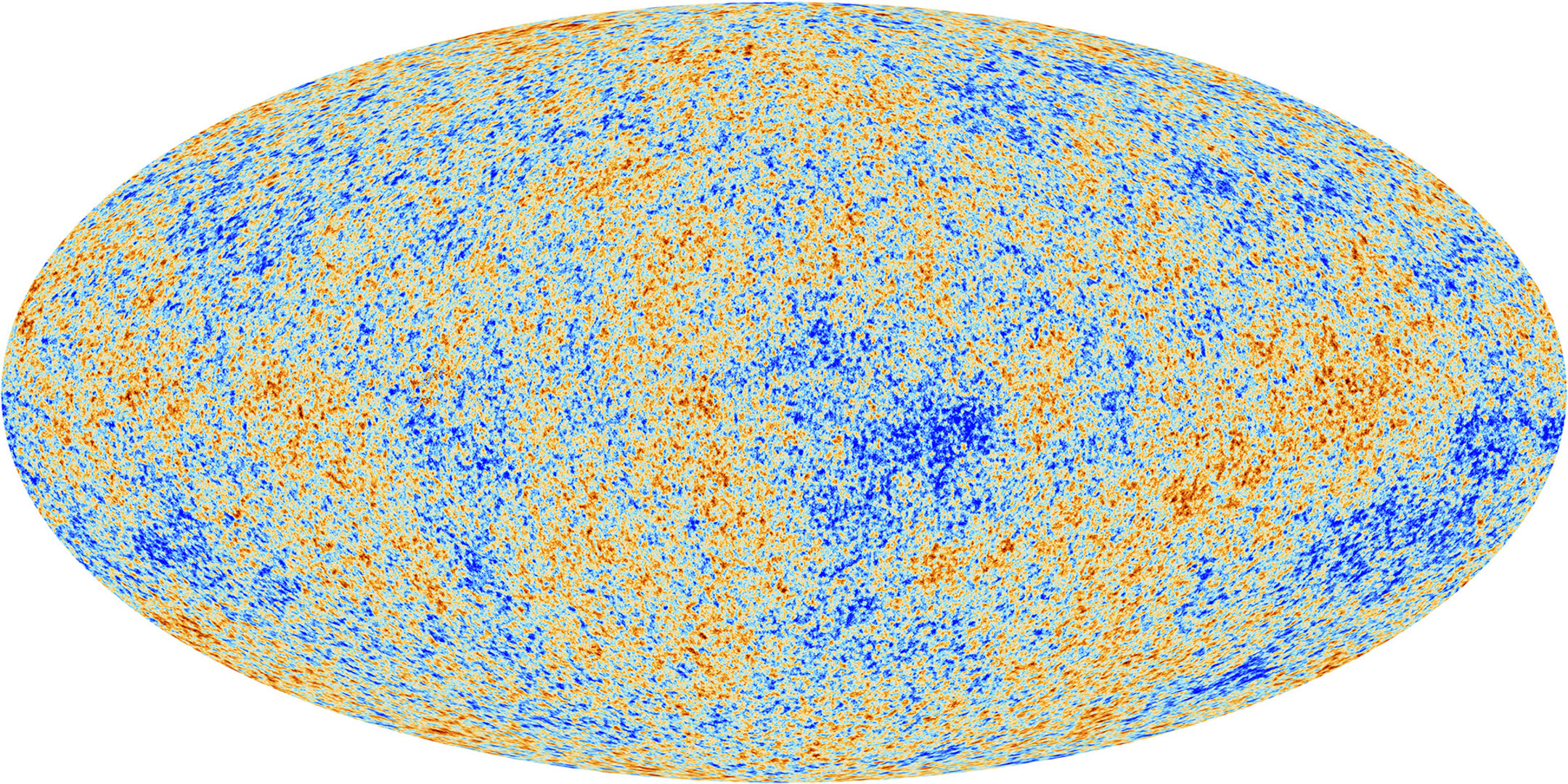 Now what does that mean, "as a function of angular scale?" Well, how would you describe the surface of the Pacific Ocean? Is it smooth or rough? The answer depends on length scale. On very large scales, scales much larger than the typical wavelength of a wave, it is quite smooth. But then on scales the length of a typical wave it is rougher. Zooming in further, to length scales smaller than a typical wave wavelength, it might appear smooth again.

We can do the same type of analysis with a map of the cosmic microwave background. The scale-dependent measure of "roughness" we call "power" (to be defined precisely below). The power spectrum of the CMB looks something like in the left panel below. On the right panel is a simulated map that is consistent with this power spectrum.