We are interested in seeing how the presence of a conductor affects the electric field, so we begin with the simplest case – a point charge near an infinite conducting plane. The key property of the conductor is that the field must strike it at right angles, which means that with a nearby point charge the field must look like:

Figure 1.8.1 – Field of a Point Charge Near a Flat Conductor This field actually looks very much like (half of) a field that we have seen before:

It turns out that this is more than a resemblance of fields. In the region outside the conductor, the field is precisely the same as if the conductor were removed and a second point charge of equal magnitude and opposite sign was symmetrically-placed on the opposite side of where the conducting surface was.

The equivalence of these two fields provides us with an opportunity to use a clever trick for analyzing physical situations involving electric charges near flat conductors. For a point charge, this trick involves introducing an imaginary image charge reflected across the conducting surface, and using that charge to derive the actual field outside the conductor surface.

Now one might ask, "What's the big deal? All this trick gets us is the field strength for this single situation?" No, we get much more than this. First, consider that the charge outside the conductor will feel a force thanks to this field, and we can actually calculate what this force is, because it is the same as if the charge was in the presence of another point charge. If the charge is a perpendicular distance of \(x\) from the conductor, then the force the conductor exerts on the point charge is:

The power of this trick goes beyond what we can say about a single point charge. As we saw when we integrated fields for charge distributions, we can use superposition to determine a field of many point charges. If several point charges (or a continuous distribution of charge) is located near a flat conductor, then simply introducing an image charge for every charge (whether it is an individual point charge or an infinitesimal chunk of charge from a distribution) will work as a substitute for the conductor.

Charge on the Conductor

Let's return to the case of a point charge near the conducting plane. We know it is attracted to the conductor, but if the image charge isn't really there, what exactly is exerting this force? The answer must be charge, of course, but the conductor is neutrally-charged. But this charge is free to move, so naturally charge of the opposite sign as the point charge will migrate to the surface closest to the point charge, while charge of the opposite sign migrates the opposite direction. The pull of the closer charge is then greater than the push of the more distant charge, causing a net attractive force.

Figure 1.8.3 – Computing the Charge Density on the Conductor

The minus sign was added to account for the fact that the sign of the charge on the surface is opposite the sign of the point charge \(Q\). We can even determine how much total charge is brought to the near surface of the conductor. We get this by integrating the surface charge over the whole surface:

This has radial symmetry, so we use polar coordinates. An element of area is \(dA=rdrd\theta\), so:

So the amount of charge attracted to the near surface is exactly the negative of the point charge! There is actually a very clever alternative means of showing this that doesn't involve an integral, using Gauss's law. Construct a half-spherical gaussian surface of infinite radius with the flat part within the metal of the conducting plane, as depicted below. 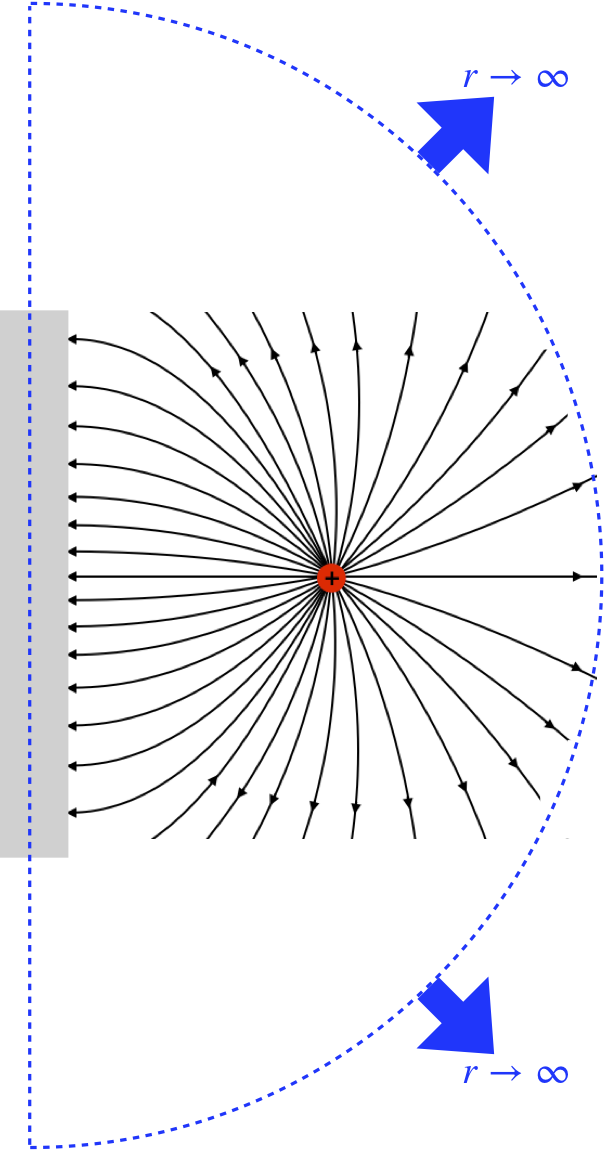 The area of this hemisphere grows with the square of the radius:

The flux through any little part of the surface is no larger than the product of the magnitude of the electric field and the area (it is smaller when the angle the field makes with the area vector is greater than zero), so total flux changes with \(r\) no faster than:

But as we are letting \(r\rightarrow\infty\), this flux goes to zero, which when added to the zero flux through the flat surface, means that the total flux though this surface is zero. Gauss's law therefore insists that the enclosed charge is zero. The point charge contributes \(Q\) to the interior, which means that the conducting surface (also enclosed by the gaussian surface) must contribute \(-Q\).

Field on the Other Side of the Conductor

We know that the image charge is a fabrication of our imaginations, but what actually is happening on the other side of this conductor? There is clearly \(Q\) on the far side, left behind by the \(-Q\) that migrated to the near side (the conductor is neutrally-charged overall), so what kind of field does this create? Let's start by confirming that the field inside the conductor vanishes as it should.

Begin by considering what the field of just the charges on the near surface of the conductor looks like outside that surface. We know that these charges create a field that (in that region) looks identical to the field created by the image charge, so it looks like:

Figure 1.8.5a – Field of the Surface Charge Alone Next imagine removing the conductor, but leaving the surface charge fixed in place. Then the field would look the same on both sides of the charge:

Figure 1.8.5b – Field of the Surface Charge Alone 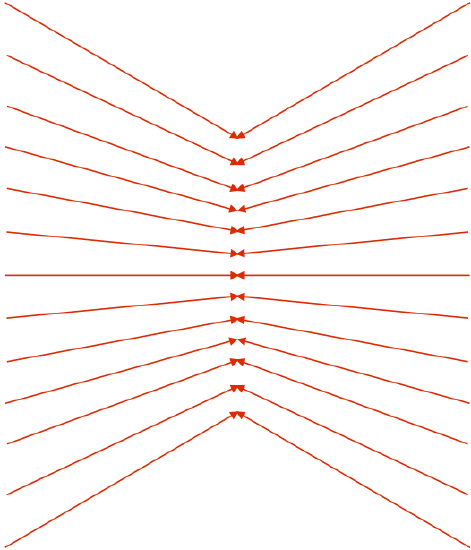 And now into this field, let's place our real positive charge in its proper position. Since the field lines on the right side of the figure above converge to the position of the image charge, by symmetry the field lines on the left side must converge to the position of the real charge. This means that the field on the left side above cancels the real point charge field in that region, giving a total field of zero to the left, and (as we have already shown) the half-dipole field to the right:

It should be apparent from the discussion above that the trick of using image charges (known as the method of images) has many applications for determining fields, forces, and surface charge densities. Specifically, we do not have to limit ourselves to the case of a single point charge. If there are multiple point charges present, we simply have to construct an image charge for each of them and use superposition. This can then be extended to continuous collections of charge as well – just construct an image collection of charge and use superposition from there.

For this class, we will limit ourselves to the simplest geometry of a single plane conductor, but the method can be expanded to multiple conducting planes and even spherical conductors.

A thin circular plastic ring carries a net charge that is uniformly distributed throughout the ring with a linear density of \(\lambda\). This ring is positioned parallel to a neutrally-charged infinite conducting plane such that its distance from the plane equals the radius of the ring. In Example 1.3.1, we showed that the magnitude of the electric field on the axis of such a ring is given by:

where \(x\) is the distance from the ring along the axis. The field points along the axis of the ring, toward the ring (if the charge is negative), or away from it (if the charge is positive). A charged point particle is placed at the center of the ring. This particle has the same total charge as the ring, but it has the opposite sign. Find the magnitude and direction of the net force on this particle in terms of \(\lambda\).

We can use the method of images to replace the conductor with image charges placed symmetrically on the opposite side of the conducting surface. We need images for both the point charge and the ring. The plastic ring will not contribute to the force on the point particle, because the particle is at its center, where the electric field of the ring vanishes. So the only two contributors to the force are the image point charge and the image ring. Start by determining the amount of charge on the particle in terms of the given linear density:

The force between the point particle and its image is just the Coulomb force (with a separation of \(r=2a\)), and it is attractive (toward the plane), since the image charge has the opposite sign:

These forces are in opposite directions, so the net force on the point charge is:

The fact that this number is positive means that \(F_1>F_2\), so the net force is toward the conductor.