The work-energy theorem discussed in the previous section was derived from Newton's second law, which carries with it a reference to the center of mass of the object on which the force is acting. So technically, the velocity and displacement that appear in the work-energy theorem are the velocity and displacement of the center of mass, which would suggest altering Equation 4.1.4 to:

While accurate, this introduces a lot of cumbersome subscripts, which are entirely unnecessary for the kinds of physical situations we had in mind – a force acting on a solid object to accelerate every part of the object the same as its center of mass. But this does suggest an interesting extension of the idea: What if the force acts on one part of a system that includes multiple objects? Indeed, even a solid object is technically comprised of lots of particles, and many forces that act on such an object are only exerted on a fraction of the particles. We now explore this idea.

An Instructive Model – A System of Two Particles

Let's explore the work-energy theorem in the context of a system of two particles of differing masses. For simplicity, we'll keep everything in one dimension – the particles can only move along the \(x\)-axis, and the force that does the work can only act parallel to the \(x\)-axis. The thing to remember about our two-particle system is that we will be watching how the system's motion evolves, regardless of what happens to the individual particles. One can imagine cloaking the details of the particle motions and just watching the motion of the center of mass of the conglomerate.

Now let's apply a force on this system (which we will assume starts from rest) from the left, which means it is exerted only on \(m_1\), but as far as we are concerned, it is exerted on the system (we can't see \(m_1\)).

Figure 4.4.2 – Work Performed on a System of Two Particles

After \(m_1\) starts moving, the velocity of the center of mass is:

We want to check to see if this work results equals what we measure for the change of kinetic energy of the system (which starts at zero), so we calculate the final kinetic energy using the total mass of the system and the speed of the center of mass from Equation 4.4.3:

Comparing Equation 4.4.4 and Equation 4.4.5, we see that the work-energy theorem applies to the system as a whole if:

The reader may be puzzled about why the same force acting on the same system appears to transfer two different amounts of energy, depending upon one's perspective. From the particle point of view, the energy transferred to the two particle system is \(\frac{1}{2}m_1v_1^2\) to one particle and zero to the other for a total energy transfer of \(\frac{1}{2}m_1v_1^2\). From the view of someone looking at the system as a whole from outside, the system gains the same amount of energy, reduced by a fraction of \(\frac{m_1}{m_1+m_2}\). It clearly can't be both, so which amount of energy does the system really get?

If we imagine a system as a closed box with a bunch of particles in it, the box has an energy equal to the sum of the masses of the particles. If all of the particles happen to be moving in the same direction at the same speed, then the box must also be moving, and the kinetic energy of the system equals the sum of the kinetic energies of the particles. But suppose while all the particles move at the same speed, half are going in the opposite direction as the other half. In this case, the center of mass remains stationary, and the kinetic energy of the box is zero (one-half the total mass times the square of the center of mass velocity). Clearly the energy in the system is not zero, but from our outside-the-box perspective, we are unable to witness it directly.

It is important to note that this is not a modification of the work-energy theorem. The right hand side of this equation still equals the total kinetic energy of the system. It just repackages it to accommodate what we can readily see (the mechanical energy) and what we cannot (the internal energy). We can once again take the steps we outlined previously to construct our energy conservation models.

Use of the word "system" in Section 3.4 is subtly different from how the word is used here. Here it refers to a collection of particles within a single object, allowing us to distinguish mechanical energy from internal energy for that object. Our previous use of the word "system" referred to a collection of objects. What we refer to as "external" work here could be work done between objects that are within the same collection-of-objects system, and should not be confused with work that could be done from outside the system of objects. If this external work between objects doesn't result in any internal energy created within the objects, then the force between the objects is conservative, and can be expressed as a potential energy. It can be confusing to keep these different system definitions straight, and it might help to remember our current discussion as "systems of particles," and the previous discussion as "systems of objects," with objects being collections of particles.

Notice how important the model we use is to the definition of what energy is mechanical and what energy is internal. If our model is constructed to take into account the movements of all the particles, then all of the energy is mechanical. But as soon as we have to lump together particles into a system (whether by choice or out of necessity), we define this division of energy types. No matter how we define our system and do our accounting, however, the total energy is still conserved.

Notice also that this doesn't just apply to internal kinetic energy. If the particles within the system interact with each other through some internal force, then the potential energy that results goes into the accounting of the internal energy. In our two-particle model, we might imagine a spring connecting the two particles that is compressed when the force is applied. Even in this case, the particles get closer together, which means that the work done on \(m_1\) is greater than the work done on the system as a whole (the center of mass doesn't move as far as \(m_1\)), resulting in some of the energy going internal. In this case, the internal energy is manifested by the two particles vibrating back-and-forth as the center of mass of the system moves along at a steady speed.

When we discussed non-conservative forces and how they lead to thermal energy, the mechanism by which this occurred was rather mysterious. Perhaps now with the insight we have into work done by a force resulting in both mechanical energy change and internal energy change, we can get a better sense of how all this plays out.

For the vast majority of situations in classical mechanics, we resort to the first of these criteria in cases of conservative forces: A solid mass is pushed by a spring; a solid magnet is repulsed by another magnet, and so on. It is possible, however, to avoid a change in internal energy for a system of particles that are not rigidly held together, such as gases and liquids, if the second criterion is met. The latter criterion is clearly satisfied by gravity. Sure enough, we know that work done by gravity changes only the mechanical energy of a system, and not its thermal energy (it is "conservative"). 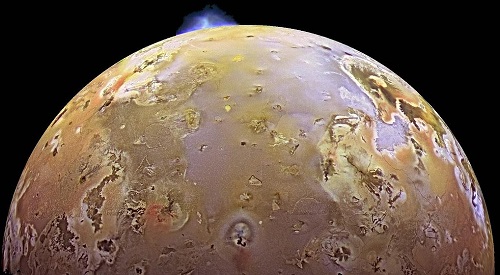 Io, with two plumes erupting from its surface. NASA

Forces other than gravity that act on a gas, however, will have an effect on the internal energy of the system. For example, if we compress a gas in a confined space, the piston doing the compressing only does work on the particles with which it comes in contact. After the piston is done moving, the center of mass of the gas comes back to rest, which means the piston added nothing to the gas system's mechanical energy. But clearly work was done, and this goes into the internal energy of the gas, the change of which we can measure with an increase in temperature.

Consider next the case of kinetic friction. We know that the mechanism for this force involves microscopic interactions of irregularities in the two surfaces involved. This means that the particles only at the surfaces are exerting forces on each other – all the particles in the objects that are sliding are not involved equally. We cannot resort to saying that the objects involved are systems of particles held rigidly together, or they would stop moving immediately when surface irregularities interacted. These irregularities must be capable of some deformation for any sliding to occur. For static friction, the particles can be considered to be held rigidly in place, and therefore no thermal energy is generated from static friction as there is with kinetic friction.

Kinetic Energy Distribution Within a System

Let’s return once again to an example we looked at in the previous section (Figure 4.3.1), and ask a new question about it (the example has been simplified slightly by giving one block exactly twice the mass of the second block).

The spring stored some potential energy when it was compressed, and it gave this energy to the kinetic energy of the two blocks. What fraction of this energy is given to each of the blocks? One might be inclined to believe that since the spring exerts equal forces on both blocks, they both get equal amounts of kinetic energy. But by now we know better! They only get the same amount of energy if the spring does the same amount of work on both, and it's clear here that the lighter mass is pushed a longer distance before losing contact with the spring than the heavier mass, so with equal forces acting on each, more work is done on the lighter mass. Specifically, the lighter mass is accelerated twice as much by the equal force, so it displaces twice as far, and therefore gets twice as much energy as the heavier block.

Another way to see it is to note that both blocks must have the same magnitude of momentum after the spring expands (since the momenta must cancel to equal zero and remain conserved), so using Equation 4.1.5 we can compare their kinetic energies:

This confirms what we reasoned above.