Figure 5.2.1 – Motion of a Single Particle in a Rotating Rigid Body Plugging the constant \(\lambda\) into Equation 5.2.5 and performing the integral gives:

Find the rotational inertia of the non-uniform rod of mass \(M\) and length \(L\) whose mass density function is given by Equation 5.2.8, when rotated about its heavier end (\(x=L\)).

We can treat a rod rotated around an axis through its center as if it is two separate half-rods of half the mass and half the length, attached at their ends. The axis that passes though the center of the rod passes through the ends of these two half-rods, and we know the rotational inertia of each half-rod. The additivity property then gives us the rotational inertia of the whole rod about its center:

Use the parallel axis theorem and the result given by Equation 5.2.7 to find the rotational inertia of a uniform thin rod of mass \(M\) and length \(L\) about its center of mass. 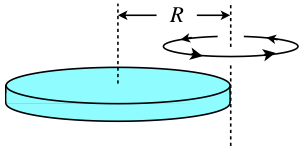