As instructive as the infinite potential well is, in that model we trade a bit of realism for ease of calculation. The main element of bound states that is not accounted-for in the infinite well is the fact that bound states could become unbound. We therefore turn now to the finite potential well. As with the infinite well, the walls are still infinitely-steep, but now they have a finite height. We start as usual with Schrödinger’s equation for stationary states in the position basis:

We begin our examination of the bound states with the process we followed with the infinite potential well – by writing down a general wave function for the “free” particle inside the well, where \(V\left(x\right)=0\). As before, we are confining this particle, which means we need two plane wave states, one moving in each direction. We have yet to normalize the wave function, so we'll just include a constant multiplying each plane wave:

Mathematically we can see that there will be a difference with the infinite square well at this point. We started the infinite square well by noting that the wave function must necessarily vanish outside the confines of the box, but it is not obvious that that is the case here. We know that in classical physics, if \(E<V_o\), the object can’t ever be outside the confines of the well, but the mathematics does not rule it out immediately, and we’ve learned not to trust our classical reasoning by now. Since we cannot prove that the wave function vanishes at the boundary as we did for the infinite well (no matter what our classical intuition might say), we cannot immediately jump to the solution of a standing wave with nodes at the endpoints. In other words, we need to take more care with those boundary conditions. We therefore turn to the differential equation outside the walls. In that region, Schrödinger’s stationary state wave equation is:

If \(E-V_o>0\), then this is the same as the differential equation inside the well (i.e. that of a free particle), with the exception that the kinetic energy of the particle is a little lower (by an amount \(V_o\)). To find a solution, all we need to do is match the boundary conditions for the free particle within the well to the free particle outside the well, and we're done. But we aren't here to solve the particle-hits-a-pot-hole problem (yet) – we are interested in the bound states of this well. We therefore assume that \(E-V_o<0\). The difference may not seem significant at first, so let's see what happens if we try a free-particle solution. When we plug into Schrödinger's equation, we get:

The left side of this equation is strictly positive, while we are assuming the left side is negative, so this solution doesn't work. The problem with the plane wave is that two derivatives brings down the imaginary \(i\) twice, changing the sign. If we just lose the \(i\) from the plane wave solution (which takes away its sinusoidal nature), we get a solution that works:

You’ll note that this implies that in the classically-forbidden region the kinetic energy of the particle is negative. For now I’ll say don’t panic – just because a wave function shows certain characteristics, it doesn’t mean that those characteristics will actually be measured, which is really the test that matters. We will return to this question later.

Consider constructing a wave function with three antinodes within the finite square well. Can more than one of these be constructed with different wavelengths? If so, then it means that we are not restricted to discrete energy levels (one for each number of antinodes). For a graphic view of this, see the figure below. 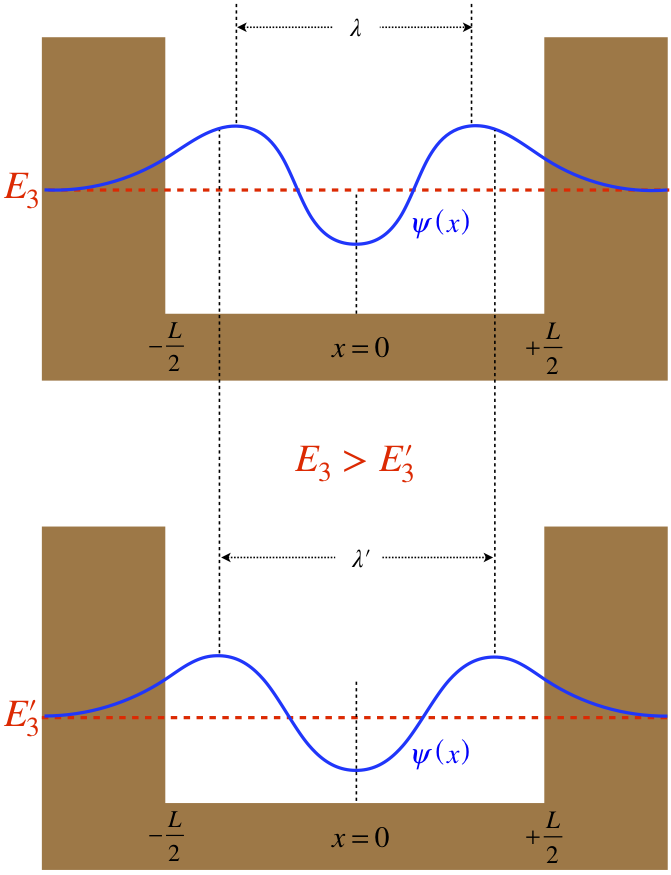 Clearly if the wave functions are forced to vanish at the walls, then only one wavelength is possible – the wavelength would be forced to be \(\frac{2}{3}L\). But with the flexibility now available at the boundary, it seems plausible that we could fit a whole continuum of wavelengths between the walls. But the boundary conditions at the walls are more restrictive than they appear.

Let's start with an exponentially-decaying function in the forbidden region. This function is uniquely determined if we know its height and slope at the right boundary:

By "uniquely determined" we mean that if we choose a trial exponentially-decaying function, then the height of this function at the right boundary \(f\left(\frac{L}{2}\right)\) and the slope of the function at that boundary \(f'\left(\frac{L}{2}\right)\) gives us two equations from which we can (in principle) solve for the two unknowns \(B\) and \(\alpha\). Knowing \(\alpha\) is the same as knowing the energy of the particle, since we already know the depth of the well \(V_o\) and the the mass of the particle \(m\), along with Equation 3.4.5. But if we know the energy of the particle, then we also know the wave number \(k\) for the wave function inside the well, thanks to Equation 3.4.2.

Okay, so we have chosen an exponentially-decaying function for the forbidden region (defined by the value and slope at the boundary), and this choice restricts us to a specific number of antinodes (defined by the wave number and the width of the well) within the well. In order to create a correct wave function, the values and slopes at the boundary inside the well must match those outside the well. Just as it did to the function outside the well, this restricts the wave function inside the well to a specific harmonic function.

We therefore only have two degrees of freedom to work with: Choosing \(B\) and \(\alpha\) at the beginning results in specific values for \(A\) and \(k\) afterward. We can change these to alter the number of antinodes inside the well, but we have to keep in mind that the whole wave function must be normalized, which places one more restriction. The result is that there is exactly one unique full wave function for every number of antinodes. We can therefore only get one eigenstate (one wavelength, one energy) for each number of antinodes between the walls, which means that the energy spectrum is quantized.

This argument works not only for this square well, but for all bound states. We have not proven that every well actually has at least one bound state (and we can't, at least not with any great generality), but if bound states exist for a potential, then the energy spectrum is quantized.

Virtually every textbook on quantum mechanics includes a detailed solution of the finite square well, so reproducing it here is not particularly efficient. The method consists of writing the general form of the wave function inside and outside the well (Equations 3.42 and 3.4.5), and then matching the values and slopes at the boundary to solve for the unknown constants. As ubiquitous as this solution is in the literature, the normalized energy eigenstate wave functions are rarely given (i.e. few authors compute the coefficients of the sinusoidal interior wave function or the exponential exterior wave function). Indeed, the interesting part of this model is the energy spectrum, and it can be found without completing the arduous computation of the normalized wave functions. Actually, "can be found" may be too strong of a claim, since the relationship between the wave numbers inside and outside the well are the solutions of a transcendental equation, which can only be solved numerically. Specifically, we get, after all the math:

Let’s look a little closer at the part of the wave function that “leaks” into the region where classical physics says the particle can never be found. We define a rough measure of how far the particle is likely to go into this region with a quantity known as the penetration depth. It is defined as the inverse of the constant \(\alpha\), which has units of distance:

A close analogy can be made between penetration depth and the "time constant" used to describe the exponential decay of charge in a discharging capacitor. The time constant gives a natural measure of time for a discharging capacitor, and penetration depth gives a natural measure of distance for a particle's wave function intruding into the classically-forbidden region.

Okay, so the natural question to ask is, “Do we actually ever see a particle in this forbidden region, and when we do, does it have a negative kinetic energy?” First of all, we have to purge from our minds the classical notion that the object in the well moves back-and-forth from the farthest reaches of where it can go. The particle does not go into and out of the forbidden region, the wave function just goes there. The way we see this classical violation occurring is in a phenomenon known as tunneling, which we will discuss in the next section. In this case, the well wall exceeds the particle's total energy, but farther away the height of the well comes down again, and the particle is free on the other side.

Suppose we try finding the particle in the forbidden region. In this case, we’ll need to make such a measurement to within the tolerance of the penetration depth, which means we need our measurement uncertainty to be less than \(\delta\). This puts a lower limit on the uncertainty of the momentum of the particle, which in turn puts a lower limit on the uncertainty of its kinetic energy. If this uncertainty exceeds the actual (negative) kinetic energy, then in fact the KE may be positive. If we insist on measuring the KE closely enough to know its value, then the uncertainty in the position becomes greater than the penetration depth, and we don’t know if the particle is actually in the forbidden region after all. Heisenberg to the rescue!