When it comes to discussing conduction a necessary first step is modeling solid materials quantum-mechanically. We will not do this in any great detail, and in fact we will look at only the most basic of models. The first assumption is that the atoms aremprising the material of bound to each other in a semi-rigid lattice. I use the phrase "semi-rigid," because the atoms do not change positions within the material and the global structure remains intact, but individual separations of neighboring atoms will vary somewhat due to vibration, which will actually turn out to be a rather important factor in conductivity properties. Assuming a material is relatively "pure," there is no reason to believe that one region of the sample will differ in structure from any other, so we expect to see the atoms exhibit regular placement with various periodicities along various directions. There exists only a finite number of symmetries that atom lattices can satisfy, and the different patterns that these lattices form say a lot about the physical properties of the matter.

In order to follow our quest to look at only the most basic model, we will set aside these patterns and consider the one thing they all have in common – if we confine our attention to one dimension, the atoms remain (on average, ignoring vibrations) equally-spaced. We will therefore focus our attention on one-dimensional rows of atoms. This obviously has many conceptual problems when it comes to comparing it with real-life samples that exist in three dimensions, but we have to start somewhere.

We now have multiple valence electrons that are free to roam an entire string of atoms in a one-dimensional lattice, but let's start by simplifying this even more by reducing the number of available electrons to one, and the number of atoms to two. If we assume that the electron can't escape this "lattice," we can model this very crudely as a double well: 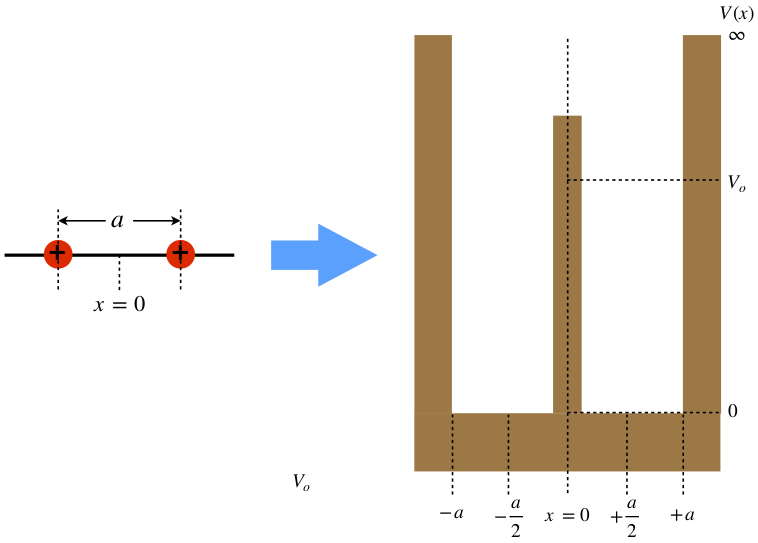 Obviously this model is extremely crude – the potential obviously varies with position, and we have drawn this as a square well, where the potential changes suddenly. In any case, it is accurate inasmuch as the potential is lower when close to the positive ions (atoms minus their valence electrons), and higher when farther away. As we have insisted that the electron is confined, we have placed infinite walls at the two ends (rather arbitrarily-spaced). The potential between the two atoms is finite, and the thickness of the barrier is unspecified. Though it is drawn as rather thin compared to the atom spacing, this is not an important feature for our discussion.

We already know roughly what the wave functions for this well look like: The ground state is a symmetric hump about \(x=0\), with a small change in the region of the center barrier (the curve flattens somewhat if \(E>V_o\), and dips downward if \(E<V_o\)). Meanwhile, the first excited state crosses the zero point (forms a node) at \(x=0\), and doesn't change much with changes in \(V_o\), as the wave function is at or close to zero in the affected region. It is useful to look at what happens to the wave function as the barrier is gradually increased.

The most important change to observe here is the huge difference in the relative changes of the particle's total energy for the two states as the barrier grows. The growth of the barrier changes the energy of the first excited state very little, while the growth of the total energy associated with the ground state is substantial. To see what is going on here we need to think about the probability densities of these states (the square of the functions shown above).

Consider the extremes. with no central barrier, the first excited state has four times the energy of the ground state. But when the central barrier gets very large (effectively infinite), we end up with two probability densities that are identical (they must both vanish at the outer edges of the central barrier). The two wave functions can be distinguished by their respective parities, but clearly they represents equal energies. Raising the central barrier raises the energy of both states, but it does more for the ground state than for the first excited state, so these two states get gradually squeezed together. One way to explain this is to think about the expectation values of kinetic and potential energy. Both wave functions experience moderate increases to their "average wave number," but when it comes to potential energy, having an antinode where the potential energy grows will result in a much faster growth of potential energy expectation than having a node there.

Equally importantly, these two states do not get squeezed into the second excited state. This higher-energy state has even parity, and therefore reacts to the rising central barrier in a manner similar to the ground state – an additional antinode gets "pinched" into it as the central antinode is forced toward zero. In the limit, this extra antinode turns this state into the energy equivalent of the third excited state. So not only does the \(n=1\) energy get squeezed into \(n=2\), but the \(n=3\) energy gets squeezed into \(n=4\), and the energies of these two pairs of states stay separated.

This pairing-off of energy levels for the double well scales-up when more wells are involved. The key point is that when the nodes of the state happen to all match-up with the barriers, the top level of the grouping of states occurs. Again, this is because when non-nodes meet the barriers, the contribution to the potential energy is greater. This means that with \(N\) wells, the populations of the groupings of levels is equal to \(N\).

In our efforts to simplify things, we have left out a rather important element. These crystals don't really have infinite walls on the outside edges. A more appropriate model is to just let the number of wells get arbitrarily large, and this affects our boundary conditions. This correction changes the relationship between the top state of one band and the bottom state of the band above it, but we won't get caught up in these details.

Going back to our original model, each well represents a positive ion in the lattice, so given the number atoms that exist in a macroscopic crystal, there is a very large number of levels in each grouping (these groupings are called energy bands), and since they are squeezed into a very small energy range, these bands are effectively a continuum of available energies. This means that an electron in this band can have its energy raised even a tiny amount.

Also note that the wave function for the top of an energy band involves an integer number of half-wavelengths fitting within each well, which means that the top of each band occurs at the energy levels of the individual atoms within the crystal. Mathematically, this means that if the atomic separation is \(a\), the tops of the \(n^{th}\) band occurs at: