This little document was written as a Supplementary Course Note for the course PHY132F - Introduction to Physics II.

We have dropped the details of diffraction from the syllabus. The dropped material appears in the text in §22.4 and §22.5. However, there are some qualitative aspects of the phenomenon of diffraction that we will wish to know, and this document discusses them.

You will want to recall that for two slit interference , the angle between successive maxima is approximately given by:

As discussed in class: The photograph to the right shows a water wave propagating to the right and passing through a gap in a sea wall. As you can see, the wave spreads out after it has passed through the slit This phenomenon is called diffraction, and occurs for all waves.

You can see in the photograph that the wavelength of the water waves is about the size of the width of the slit.

You can also see that the amplitude of the diffracted wave is largest in the center, and decreases as the magnitude of the angle from the horizontal increases.

These facts are used in the design of loudspeakers. 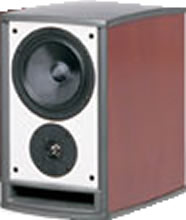 Speakers that produce bass notes are called "woofers". They need to move a lot of air, so need to be big. Diameters of 30 cm or more are common.

However, a typical high treble note has a frequency of 5000 Hz or so, which corresponds to a wavelength of 0.07 m. This is much less than the diameter required for a woofer, so if we try to use the woofer to generate a high frequency note the sound wave will beam straight ahead without significant diffraction. Thus you won't hear those notes unless you are right in front of the speaker.