Figure \(\PageIndex{1}\): Kinematic equations can help us describe and predict the motion of moving objects such as these kayaks racing in Newbury, England. (credit: Barry Skeates, Flickr)

where the subscript 0 denotes an initial value and the absence of a subscript denotes a final value in whatever motion is under consideration.

Example \(\PageIndex{2}\):Calculating Final Velocity: An Airplane Slowing Down after Landing

Draw a sketch. We draw the acceleration vector in the direction opposite the velocity vector because the plane is decelerating.

2. Identify the unknown. In this case, it is final velocity, \(\displaystyle v_f\).

3. Determine which equation to use. We can calculate the final velocity using the equation \(\displaystyle v=v_0+at\).

4. Plug in the known values and solve.

The final velocity is much less than the initial velocity, as desired when slowing down, but still positive. With jet engines, reverse thrust could be maintained long enough to stop the plane and start moving it backward. That would be indicated by a negative final velocity, which is not the case here.

PageIndex{5}: The airplane lands with an initial velocity of 70.0 m/s and slows to a final velocity of 10.0 m/s before heading for the terminal. Note that the acceleration is negative because its direction is opposite to its velocity, which is positive.

In addition to being useful in problem solving, the equation \(\displaystyle v=v_0+at\) gives us insight into the relationships among velocity, acceleration, and time. From it we can see, for example, that

(All of these observations fit our intuition, and it is always useful to examine basic equations in light of our intuition and experiences to check that they do indeed describe nature accurately.) 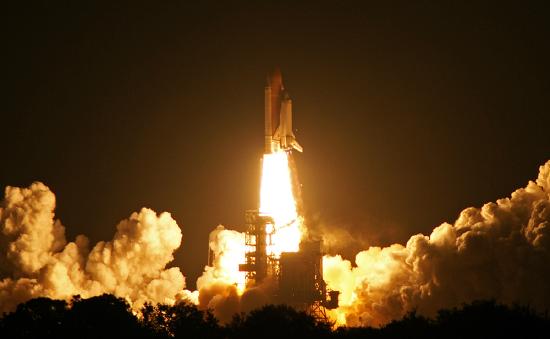 An intercontinental ballistic missile (ICBM) has a larger average acceleration than the Space Shuttle and achieves a greater velocity in the first minute or two of flight (actual ICBM burn times are classified—short-burn-time missiles are more difficult for an enemy to destroy). But the Space Shuttle obtains a greater final velocity, so that it can orbit the earth rather than come directly back down as an ICBM does. The Space Shuttle does this by accelerating for a longer time.

SOLVING FOR FINAL POSITION WHEN VELOCITY IS NOT CONSTANT (a≠0)

We can combine the equations above to find a third equation that allows us to calculate the final position of an object experiencing constant acceleration. We start with

Dragsters can achieve average accelerations of \(\displaystyle 26.0 m/s^2\). Suppose such a dragster accelerates from rest at this rate for 5.56 s. How far does it travel in this time? 2. Plug the known values into the equation to solve for the unknown x:

Since the initial position and velocity are both zero, this simplifies to

Substituting the identified values of a and t gives

If we convert 402 m to miles, we find that the distance covered is very close to one quarter of a mile, the standard distance for drag racing. So the answer is reasonable. This is an impressive displacement in only 5.56 s, but top-notch dragsters can do a quarter mile in even less time than this.

SOLVING FOR FINAL VELOCITY WHEN VELOCITY IS NOT CONSTANT (a≠0)

A fourth useful equation can be obtained from another algebraic manipulation of previous equations.

Calculate the final velocity of the dragster in Example without using information about time.

The equation \(\displaystyle v^2=v^2_0+2a(x−x_0)\) is ideally suited to this task because it relates velocities, acceleration, and displacement, and no time information is required.

To get \(\displaystyle v\), we take the square root:

145 m/s is about 522 km/h or about 324 mi/h, but even this breakneck speed is short of the record for the quarter mile. Also, note that a square root has two values; we took the positive value to indicate a velocity in the same direction as the acceleration.

An examination of the equation \(\displaystyle v^2=v^2_0+2a(x−x_0)\) can produce further insights into the general relationships among physical quantities:

In the following examples, we further explore one-dimensional motion, but in situations requiring slightly more algebraic manipulation. The examples also give insight into problem-solving techniques. The box below provides easy reference to the equations needed.

Example \(\PageIndex{5}\):Calculating Displacement: How Far Does a Car Go When Coming to a Halt?

(a) on dry concrete and

(b) on wet concrete.

(c) Repeat both calculations, finding the displacement from the point where the driver sees a traffic light turn red, taking into account his reaction time of 0.500 s to get his foot on the brake. In order to determine which equations are best to use, we need to list all of the known values and identify exactly what we need to solve for. We shall do this explicitly in the next several examples, using tables to set them off.

2. Identify the equation that will help up solve the problem. The best equation to use is

3. Rearrange the equation to solve for \(\displaystyle x\).

This part can be solved in exactly the same manner as Part A. The only difference is that the deceleration is \(\displaystyle –5.00 m/s^2\). The result is

Once the driver reacts, the stopping distance is the same as it is in Parts A and B for dry and wet concrete. So to answer this question, we need to calculate how far the car travels during the reaction time, and then add that to the stopping time. It is reasonable to assume that the velocity remains constant during the driver’s reaction time.

2. Identify the best equation to use.

3. Plug in the knowns to solve the equation.

This means the car travels 15.0 m while the driver reacts, making the total displacements in the two cases of dry and wet concrete 15.0 m greater than if he reacted instantly.

Figure \(\PageIndex{11}\) The distance necessary to stop a car varies greatly, depending on road conditions and driver reaction time. Shown here are the braking distances for dry and wet pavement, as calculated in this example, for a car initially traveling at 30.0 m/s. Also shown are the total distances traveled from the point where the driver first sees a light turn red, assuming a 0.500 s reaction time.

The displacements found in this example seem reasonable for stopping a fast-moving car. It should take longer to stop a car on wet rather than dry pavement. It is interesting that reaction time adds significantly to the displacements. But more important is the general approach to solving problems. We identify the knowns and the quantities to be determined and then find an appropriate equation. There is often more than one way to solve a problem. The various parts of this example can in fact be solved by other methods, but the solutions presented above are the shortest.

Suppose a car merges into freeway traffic on a 200-m-long ramp. If its initial velocity is 10.0 m/s and it accelerates at \(\displaystyle 2.00 m/s^2\), how long does it take to travel the 200 m up the ramp? (Such information might be useful to a traffic engineer.) \(PageIndex{12}\):We are asked to solve for the time \(t\). As before, we identify the known quantities in order to choose a convenient physical relationship (that is, an equation with one unknown, \(t\)).

2. We need to solve for t. Choose the best equation. \(\displaystyle x=x_0+v_0t+\frac{1}{2}at^2\) works best because the only unknown in the equation is the variable t for which we need to solve.

3. We will need to rearrange the equation to solve for t. In this case, it will be easier to plug in the knowns first.

4. Simplify the equation. The units of meters (m) cancel because they are in each term. We can get the units of seconds (s) to cancel by taking \(\displaystyle t=ts\), where \(\displaystyle t\) is the magnitude of time and s is the unit. Doing so leaves

5. Use the quadratic formula to solve for \(\displaystyle t\).

This is a quadratic equation of the form

(b) Its solutions are given by the quadratic formula:

This yields two solutions for \(\displaystyle t\), which are

In this case, then, the time is \(\displaystyle t=t\) in seconds, or

A negative value for time is unreasonable, since it would mean that the event happened 20 s before the motion began. We can discard that solution. Thus,

Whenever an equation contains an unknown squared, there will be two solutions. In some problems both solutions are meaningful, but in others, such as the above, only one solution is reasonable. The 10.0 s answer seems reasonable for a typical freeway on-ramp.

With the basics of kinematics established, we can go on to many other interesting examples and applications. In the process of developing kinematics, we have also glimpsed a general approach to problem solving that produces both correct answers and insights into physical relationships. Problem-Solving Basics discusses problem-solving basics and outlines an approach that will help you succeed in this invaluable task.

We have been using SI units of meters per second squared to describe some examples of acceleration or deceleration of cars, runners, and trains. To achieve a better feel for these numbers, one can measure the braking deceleration of a car doing a slow (and safe) stop. Recall that, for average acceleration, \(\displaystyle \bar{a}=Δv/Δt\). While traveling in a car, slowly apply the brakes as you come up to a stop sign. Have a passenger note the initial speed in miles per hour and the time taken (in seconds) to stop. From this, calculate the deceleration in miles per hour per second. Convert this to meters per second squared and compare with other decelerations mentioned in this chapter. Calculate the distance traveled in braking.

A manned rocket accelerates at a rate of \(\displaystyle 20 m/s^2\) during launch. How long does it take the rocket to reach a velocity of 400 m/s?

Rearrange to solve for \(\displaystyle t\).