When you rise from lounging in a warm bath, your arms feel strangely heavy. This is because you no longer have the buoyant support of the water. Where does this buoyant force come from? Why is it that some things float and others do not? Do objects that sink get any support at all from the fluid? Is your body buoyed by the atmosphere, or are only helium balloons affected (Figure \(\PageIndex{1}\))?

Figure \(\PageIndex{1}\): (a) Even objects that sink, like this anchor, are partly supported by water when submerged. (b) Submarines have adjustable density (ballast tanks) so that they may float or sink as desired. (credit: Allied Navy) (c) Helium-filled balloons tug upward on their strings, demonstrating air’s buoyant effect. (credit: Crystl)

The buoyant force is the net upward force on any object in any fluid. Just how great is this buoyant force? To answer this question, think about what happens when a submerged object is removed from a fluid, as in Figure \(\PageIndex{3}\). The space it occupied is filled by fluid having a weight \(w_{fl}\). This weight is supported by the surrounding fluid, and so the buoyant force must equal \(w_{fl}\), the weight of the fluid displaced by the object. It is a tribute to the genius of the Greek mathematician and inventor Archimedes (ca. 287–212 B.C.) that he stated this principle long before concepts of force were well established. Stated in words, Archimedes’ principle is as follows: The buoyant force on an object equals the weight of the fluid it displaces. In equation form, Archimedes’ principle is

where \(F_B\) is the buoyant force and \(w_{fl}\) is the weight of the fluid displaced by the object. Archimedes’ principle is valid in general, for any object in any fluid, whether partially or totally submerged.

Humm … High-tech body swimsuits were introduced in 2008 in preparation for the Beijing Olympics. One concern (and international rule) was that these suits should not provide any buoyancy advantage. How do you think that this rule could be verified?

The density of aluminum foil is 2.7 times the density of water. Take a piece of foil, roll it up into a ball and drop it into water. Does it sink? Why or why not? Can you make it sink?

Drop a lump of clay in water. It will sink. Then mold the lump of clay into the shape of a boat, and it will float. Because of its shape, the boat displaces more water than the lump and experiences a greater buoyant force. The same is true of steel ships.

To find the buoyant force, we must find the weight of water displaced. We can do this by using the densities of water and steel given in [link]. We note that, since the steel is completely submerged, its volume and the water’s volume are the same. Once we know the volume of water, we can find its mass and weight.

First, we use the definition of density \(\rho = \frac{m}{V}\) to find the steel’s volume, and then we substitute values for mass and density. This gives

Because the steel is completely submerged, this is also the volume of water displaced, \(V_W\). We can now find the mass of water displaced from the relationship between its volume and density, both of which are known. This gives

By Archimedes’ principle, the weight of water displaced is \(m_Wg\), so the buoyance force is

The mass of water displaced is found from its relationship to density and volume, both of which are known. That is,

The maximum buoyant force is the weight of this much water, or

The maximum buoyant force is ten times the weight of the steel, meaning the ship can carry a load nine times its own weight without sinking.

Density plays a crucial role in Archimedes’ principle. The average density of an object is what ultimately determines whether it floats. If its average density is less than that of the surrounding fluid, it will float. This is because the fluid, having a higher density, contains more mass and hence more weight in the same volume. The buoyant force, which equals the weight of the fluid displaced, is thus greater than the weight of the object. Likewise, an object denser than the fluid will sink.

The volume submerged equals the volume of fluid displaced, which we call \(V_{fl}\). Now we can obtain the relationship between the densities by substituting \(\rho = \frac{m}{V}\) into the expression. This gives

Figure \(\PageIndex{4}\): An unloaded ship (a) floats higher in the water than a loaded ship (b).

We use this last relationship to measure densities. This is done by measuring the fraction of a floating object that is submerged—for example, with a hydrometer. It is useful to define the ratio of the density of an object to a fluid (usually water) as specific gravity:

Specific gravity is the ratio of the density of an object to a fluid (usually water). 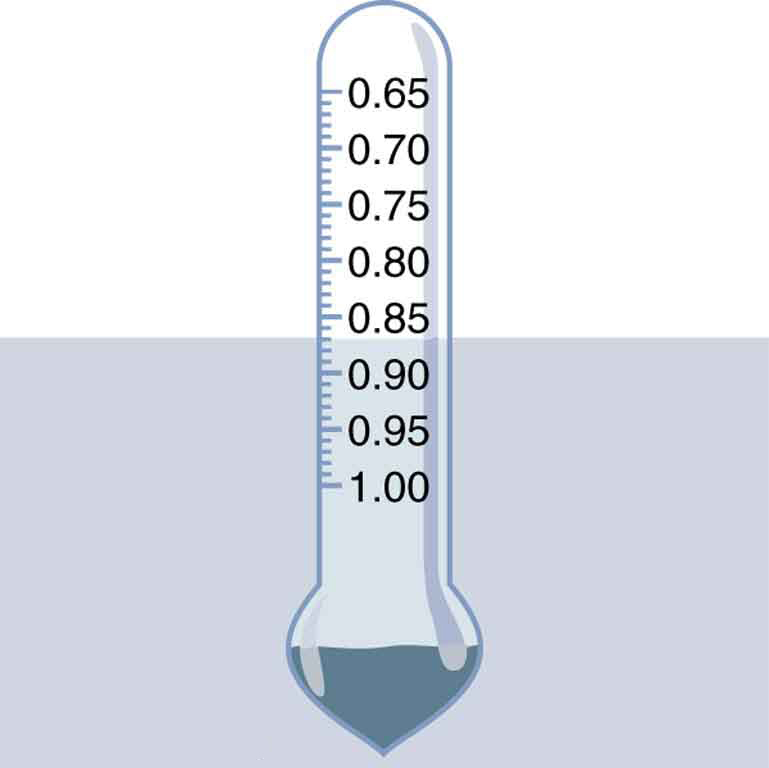 Suppose a 60.0-kg woman floats in freshwater with \(97.0\%\) of her volume submerged when her lungs are full of air. What is her average density?

We can find the woman’s density by solving the equation

for the density of the object. This yields

We know both the fraction submerged and the density of water, and so we can calculate the woman’s density.

Entering the known values into the expression for her density, we obtain

Her density is less than the fluid density. We expect this because she floats. Body density is one indicator of a person’s percent body fat, of interest in medical diagnostics and athletic training. (See Figure \(\PageIndex{7}\)) Figure \(\PageIndex{6}\): Subject in a “fat tank,” where he is weighed while completely submerged as part of a body density determination. The subject must completely empty his lungs and hold a metal weight in order to sink. Corrections are made for the residual air in his lungs (measured separately) and the metal weight. His corrected submerged weight, his weight in air, and pinch tests of strategic fatty areas are used to calculate his percent body fat.

Figure \(\PageIndex{7}\): (a) A coin is weighed in air. (b) The apparent weight of the coin is determined while it is completely submerged in a fluid of known density. These two measurements are used to calculate the density of the coin.

The next example illustrates the use of this technique.

and that effects caused by the wire suspending the coin are negligible.

You can see from [link] that this density is very close to that of pure silver, appropriate for this type of ancient coin. Most modern counterfeits are not pure silver.

This brings us back to Archimedes’ principle and how it came into being. As the story goes, the king of Syracuse gave Archimedes the task of determining whether the royal crown maker was supplying a crown of pure gold. The purity of gold is difficult to determine by color (it can be diluted with other metals and still look as yellow as pure gold), and other analytical techniques had not yet been conceived. Even ancient peoples, however, realized that the density of gold was greater than that of any other then-known substance. Archimedes purportedly agonized over his task and had his inspiration one day while at the public baths, pondering the support the water gave his body. He came up with his now-famous principle, saw how to apply it to determine density, and ran naked down the streets of Syracuse crying “Eureka!” (Greek for “I have found it”). Similar behavior can be observed in contemporary physicists from time to time!

When will objects float and when will they sink? Learn how buoyancy works with blocks. Arrows show the applied forces, and you can modify the properties of the blocks and the fluid.