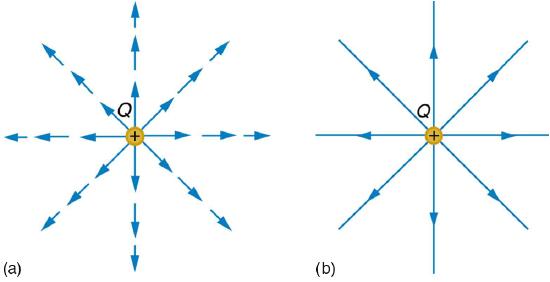 Note that the electric field is defined for a positive test charge \(q\), so that the field lines point away from a positive charge and toward a negative charge. (Figure \(\PageIndex{2}\)) The electric field strength is exactly proportional to the number of field lines per unit area, since the magnitude of the electric field for a point charge is \(E=k|Q|/r^{2}\) and area is proportional to \(r^{2}\). This pictorial representation, in which field lines represent the direction and their closeness (that is, their areal density or the number of lines crossing a unit area) represents strength, is used for all fields: electrostatic, gravitational, magnetic, and others.

Find the magnitude and direction of the total electric field due to the two point charges, \(q_{1}\) and \(q_{2}\), at the origin of the coordinate system as shown in Figure \(\PageIndex{3}\). 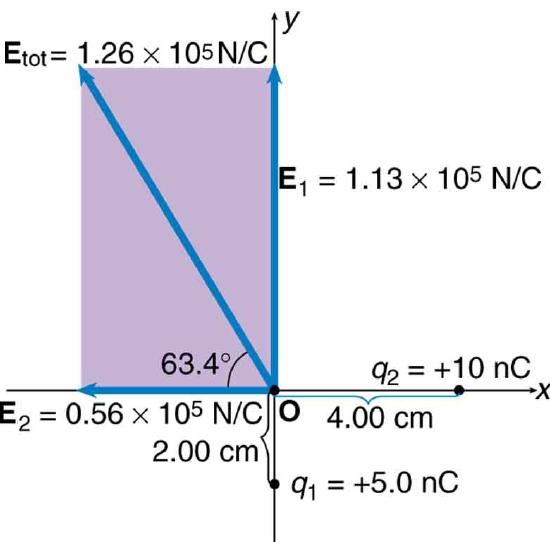 Since the electric field is a vector (having magnitude and direction), we add electric fields with the same vector techniques used for other types of vectors. We first must find the electric field due to each charge at the point of interest, which is the origin of the coordinate system (O) in this instance. We pretend that there is a positive test charge, \(q\), at point O, which allows us to determine the direction of the fields \(\mathbf{E}_{1}\) and \(\mathbf{E}_{2}\). Once those fields are found, the total field can be determined using vector addition.

Four digits have been retained in this solution to illustrate that \(E_{1}\) is exactly twice the magnitude of \(E_{2}\). Now arrows are drawn to represent the magnitudes and directions of \(\mathbf{E}_{1}\) and \(\mathbf{E}_{2}\). (Figure \(\PageIndex{3}\)) The direction of the electric field is that of the force on a positive charge so both arrows point directly away from the positive charges that create them. The arrow for \(\mathbf{E}_{1}\) is exactly twice the length of that for \(\mathbf{E}_{2}\). The arrows form a right triangle in this case and can be added using the Pythagorean theorem. The magnitude of the total field \(E_{tot}\) is

Figure \(\PageIndex{4}\) shows how the electric field from two point charges can be drawn by finding the total field at representative points and drawing electric field lines consistent with those points. While the electric fields from multiple charges are more complex than those of single charges, some simple features are easily noticed. Figure \(\PageIndex{5}\): (a) Two negative charges produce the fields shown. It is very similar to the field produced by two positive charges, except that the directions are reversed. The field is clearly weaker between the charges. The individual forces on a test charge in that region are in opposite directions. (b) Two opposite charges produce the field shown, which is stronger in the region between the charges.

Move point charges around on the playing field and then view the electric field, voltages, equipotential lines, and more. It's colorful, it's dynamic, it's free.

vector
a quantity with both magnitude and direction

vector addition
mathematical combination of two or more vectors, including their magnitudes, directions, and positions