Three long, parallel wires are located as shown. Each grid square has a width a. Find the net magnetic force per unit length on the rightmost wire.

The magnetic force on a current-carrying wire is given by the relation,

However, for this scenario the relationship simplifies. First, the magnetic field from the two source wires is constant along the entire length of the wire of interest. Second, since the wire of interest is straight, \(\mathrm{d} \vec{l}\) is also constant. Therefore, instead of an integral you have:

where L is the total length of the wire of interest. 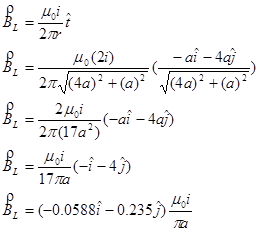 Adding these two contributions together yields

So the magnetic force on the rightmost wire is: and the force per unit length is

The bent wire below carries current i, consists of two straight segments of length 3l and a half-circle of radius L, and lies in a region of uniform magnetic field, B, in the +x-direction. Find the total force acting on the wire.

The differential element is located at an angle q, measured clockwise from the -y-axis. At this location,

is directed in the +x-direction and +y-direction. This results in:

Using this differential element, the force on the curved secton of wire is given by: The magnetic force will cause the curved end of the wire to sink into the plane of the page.