When light passes from one medium to another, the angles of incidence and refraction, and the two refractive indices are related by the familiar Snell’s Law,

Light goes from A to B via reflection from a point P on a mirror. 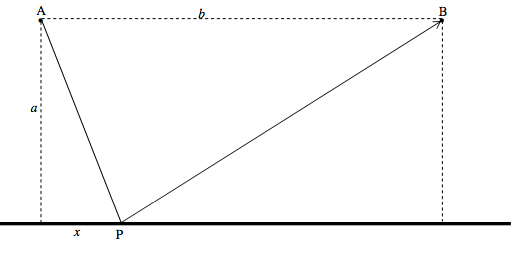 The distance \(s\) travelled is given by Of all possible paths the light might conceivably take, the path that it actually takes is the one with the shortest path.

Now let us look at refraction at an interface. The time taken to get from A to B is

If we vary the position of P, the time taken varies as

Now let us looks at Huygens’ Construction. Imagine that you are following the progress of a wavefront, and you can see the wavefront at some instant of time, and that you want to know what happens next. Huygens’ construction supposes that any point in the wavefront can be regarded as point source for a new disturbance.

For example, in the drawing below, we have wavefront moving from top to bottom.

Now we suppose that every point on the wavefront is a point source for a new disturbance:

The tangent to these little wavelets is the new wavefront:

Now let us look at refraction at an interface between two media. and so Snell’s Law is derived from the Huygens Construction. I leave it to the reader to decide whether this explains what happens, or merely describes what happens. Perhaps in science we never “explain” nature - we just “describe” it.