for complex values of the momentum variable \(k\). Of course, general complex values of \(k\) do not correspond to physical scattering, but it turns out that the scattering of physical waves can often be most simply understood in terms of dominant singularities in the complex \(k\) plane.

where \(C\) is a normalization constant.

Notice that this resembles an “outgoing wave” with imaginary momentum \(k=i\kappa\). If we analytically continue the scattering wavefunction from real \(k\) into the complex \(k\)- plane, we get both exponentially increasing and decreasing wavefunctions, making no physical sense. But there is an exception to this general observation: if the scattering matrix \(S_0(k)\) becomes infinite at some complex value of \(k\), the exponentially decreasing term will be infinitely larger than the exponentially increasing term. In other words, we’ll only have a decreasing wavefunction—a bound state. We know that the energy of a bound state has to be real and negative, and is also equal to \(\hbar^2k^2/2m\), so this can only happen for \(k\) pure imaginary, \(k=i\kappa\).

Now, the existence of a low energy bound state means that the \(S\)- matrix has a pole (on the imaginary axis) close to the origin, so this will strongly affect low energy (near the origin, but real \(k\) ) scattering. Let’s see how that works using the low-energy approximation discussed previously. Recall that the \(l=0\) partial wave amplitude \[ f_0(k)=\frac{1}{k(\cot\delta_0(k)-i)}, \label{10.3.4}\]

This \(S_0(k)\) has a pole in the complex plane at \(k=i/a\), and if this corresponds to a bound state having \(\kappa =1/a\), then the binding energy \(\hbar^2\kappa^2/2m=\hbar^2/2ma^2\). In fact, though, we run into a problem here: we get the same form of \(S_0(k)\) at low energies even for a repulsive potential, which certainly doesn’t have a bound state! The pole in \(S_0(k)\) only means that we can have an asymptotic wavefunction of the right form, but it does not guarantee that this asymptotic form will go smoothly to nonsingular behavior at the origin. For a repulsive potential, it’s easy to see that the zero (or negative) energy wavefunction on integrating out from the origin slopes more and more steeply upwards, so could never, with increasing \(r\), go over to asymptotic decay.

where \(r_0\), called the “effective range”, gives some measure of the extent of the potential (in contrast to \(a\), which, as we have seen can be arbitrarily large, even for a short-range potential).

where we now show \(k\) explicitly. This asymptotic function \(v(k,r)\) satisfies the Schrödinger equation for zero potential, but does not have the correct physical boundary behavior at \(r=0\).

(The term involving the potential has canceled out: \(dW/dr\) is nonzero here because these two functions don’t satisfy the same differential equation, the energy terms are different.)

We can find a formula for the effective range \(r_0\) by integrating the difference between these two equations from \(r=0\) to infinity: the two solutions \(u,v\) differ only within the range of the potential, and appropriately normalizing them, then taking the difference, gives a measure of this range.

Now, by definition \(u(0,r), v(0,r)\) coincide outside the range of the potential, but moving from that region towards the origin, they part company when the potential kicks in, with \(u\to 0\), \(v\to 1\) as \(r\to 0\). Therefore the integral above is a rough measure of the actual range of the potential— about half of it (hence the factor of \(2\) in defining \(r_0\) ). Note again the contrast with \(a\), which can be infinite for a short range potential.

One particular set of bound states in a potential we’ve spent a good deal of time on are the states of the hydrogen atom, and it is interesting to see how they relate to scattering. Recall that the asymptotic form of the bound state wavefunction is: \[ R_{nl}(r)\sim r^n\frac{e^{-r/na_0}}{r}. \label{10.3.22}\]

But this doesn’t have the bound-state form we found above from the analytic continuation argument, there’s an extra \(r^n\)! What’s going on? The problem is that in all our previous work, we assumed that if we looked far enough away from the center of the potential, the radial Schrödinger equation could be taken to be that for zero potential, to any desired accuracy. The Coulomb potential, though, does not decay fast enough with distance for this to be true. For instance, it has bound states having arbitrarily large radii.

Note that the extra term in the exponent keeps on growing, without limit! We are never free of the potential.

But how does this analysis of hydrogen atom wavefunctions relate to positive-energy scattering states? We can just analytically continue this result back to real \(k\) to find out. Replacing \(-\kappa\) by \(ik\) gives:

and since \(v(r)\) is slowly varying, the second derivative can be ignored, so

This leads immediately to the same form we found by analytic continuation.

Recall in the first semester we discussed \(\alpha\)- decay: an \(\alpha\) particle in a heavy nucleus can be thought of as trapped in a potential well generated by the attractive nuclear forces. A spherical square well is a workable approximation, except that this square well is at the top of a hill—outside the nucleus, the repulsive electrostatic potential is \((Z-2)2e^2/r\), sloping down from the well edge to zero as \(r\to \infty\). This means that for a radioactive nucleus, although the energy level would be at negative energy for the square well on level ground, actually it’s above the bottom of the electrostatic hill, and the \(r\to \infty\) wavefunction will not be decaying but oscillating. This asymptotic wave is of course very tiny, since typically the chances of detecting the \(\alpha\) well outside the nucleus, that is, of decay, is one in millions of years.

Now consider the reverse process: imagine we bombard a decayed nucleus with \(\alpha\) particles. If we sent in one at exactly the right energy (very difficult—this is a thought experiment!) the wavefunction would be exactly the same as that for \(\alpha\) decay. The wavefunction inside the nucleus would be huge compared with that outside, we’d never see our \(\alpha\) again. Less dramatically, if we sent in one close to that energy, the wavefunction would still be very large inside the nucleus, meaning that the particle would spend a long time inside before coming out again. (Recall for a particle in a roller coaster potential in one dimension, the wavefunction is large where the particle spends a lot of time—that’s where you’re most likely to find it.) This is a resonance: at just the right energy, the amplitude of the wavefunction within the potential becomes very large, analogous to the amplitude of a classical driven oscillator as the driving frequency is adjusted to the natural oscillator frequency.

For a narrow resonance (small \(\Gamma\) ) the phase shift \(\delta_l(E)\) goes rapidly from \(0\) to \(\pi\) as the energy is increased through \(E_0\). Most of the variation occurs within an energy range \(\Gamma\) of \(E_0\), \(\Gamma\) is called the width of the resonance. If the resonance is superimposed on a slowly varying background phase shift \(\delta\), then it causes an increase from \(\delta\) to \(\delta+\pi\). This will pass through \(0\) or \(\pi\), depending on the initial sign of \(\delta\), so the maximum scattering at phase shift \(\pi/2\) will have associated with it an energy at which there is zero scattering. For substantial background \(\delta\), the zero could be close to the peak, as illustrated below: 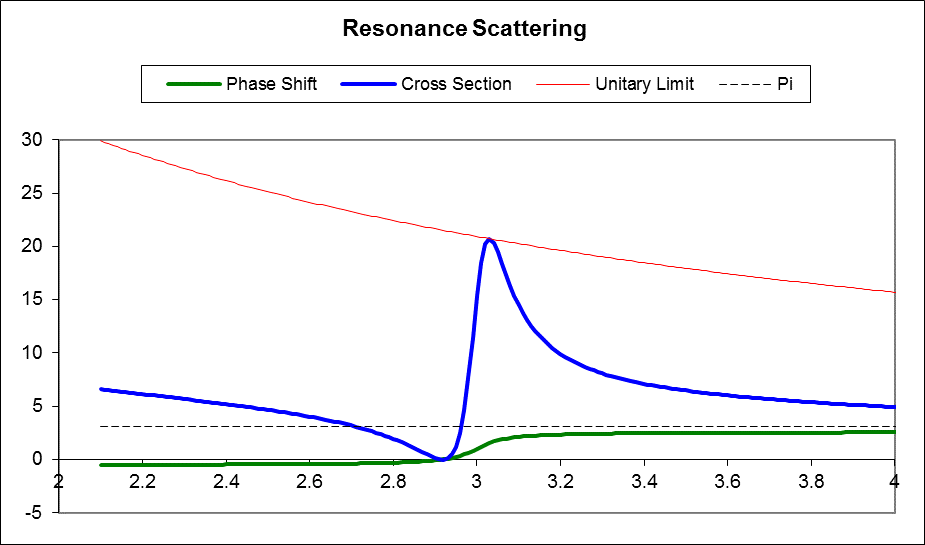