There is a tendency to believe that if an object is moving at constant speed then it has no acceleration. This is indeed true in the case of an object moving along a straight line path. On the other hand, a particle moving on a curved path is accelerating whether the speed is changing or not. Velocity has both magnitude and direction. In the case of a particle moving on a curved path, the direction of the velocity is continually changing, and thus the particle has acceleration.

We now turn our attention to the case of an object moving in a circle. We’ll start with the simplest case of circular motion, the case in which the speed of the object is a constant, a case referred to as uniform circular motion. For the moment, let’s have you be the object. Imagine that you are in a car that is traveling counterclockwise, at say 40 mph, as viewed from above, around a fairly small circular track. You are traveling in a circle. Your velocity is not constant. The magnitude of your velocity is not changing (constant speed), but the direction of your velocity is continually changing, you keep turning left! Now if you are continually turning left then you must be continually acquiring some leftward velocity. In fact, your acceleration has to be exactly leftward, at right angles to your velocity because, if your speed is not changing, but your velocity is continually changing, meaning you have some acceleration \(\vec{a}=\dfrac{d\vec{v}}{dt}\), then for every infinitesimal change in clock reading \(dt\), the change in velocity \(d\vec{v}\) that occurs during that infinitesimal time interval must be perpendicular to the velocity itself. (If it wasn’t perpendicular, then the speed would be increasing or decreasing.) So no matter where you are in the circle (around which you are traveling counterclockwise as viewed from above) you have an acceleration directed exactly leftward, perpendicular to the direction of your velocity. Now what is always directly leftward of you if you are traveling counterclockwise around a circle? Precisely! The center of the circle is always directly leftward of you. Your acceleration is thus, always, center directed. We call the center-directed acceleration associated with circular motion centripetal acceleration because the word “centripetal” means “center-directed.” Note that if you are traveling around the circle clockwise as viewed from above, you are continually turning right and your acceleration is directed rightward, straight toward the center of the circle. These considerations apply to any object—an object moving in a circle has centripetal (center-directed) acceleration.

We have a couple of ways of characterizing the motion of a particle that is moving in a circle. First, we characterize it in terms of how far the particle has traveled along the circle. If we need a position variable, we establish a start point on the circle and a positive direction. For instance, for a circle centered on the origin of an x-y plane we can define the point where the circle intersects the positive x axis as the start point, and define the direction in which the particle must move to go counterclockwise around the circle as the positive direction. The name given to this position variable is s. The position s is the total distance, measured along the circle, that the particle has traveled. The speed of the particle is then the rate of change of s, \(\dfrac{ds}{dt}\) and the direction of the velocity is tangent to the circle. The circle itself is defined by its radius. The second method of characterizing the motion of a particle is to describe it in terms of an imaginary line segment extending from the center of a circle to the particle. To use this method, one also needs to define a reference line segment—the positive x axis is the conventional choice for the case of a circle centered on the origin of an x-y coordinate system. Then, as long as you know the radius r of the circle, the angle \(theta\) that the line to the particle makes with the reference line completely specifies the location of the particle. 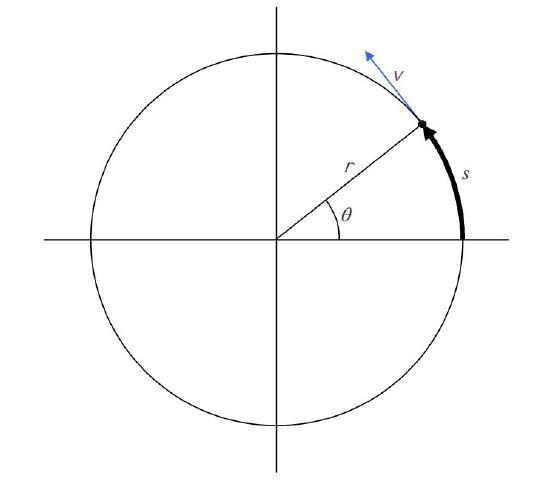 In geometry, the position variable s, defines an arc length on the circle. Recall that, by definition, the angle \(\theta\) in radians is the ratio of the arc length to the radius:

Solving for s we have:

in which we interpret the s to be the position-on-the-circle of the particle and the \(\theta\) to be the angle that an imaginary line segment, from the center of the circle to the particle, makes with a reference line segment, such as the positive x-axis. Clearly, the faster the particle is moving, the faster the angle theta is changing, and indeed we can get a relation between the speed of the particle and the rate of change of \(\theta\) just by taking the time derivative of both sides of Equation \(\ref{18-1}\). Let’s do that.

We start by taking the derivative of both sides of Equation \(\ref{18-1}\) with respect to time:

and then rewrite the result as:

just to get the reader used to the idea that we represent the time derivative of a variable, that is the rate of change of that variable, by the writing the symbol for the variable with a dot over it. Then we rewrite the result as

to emphasize the fact that the rate of change of the position-on-the-circle is the speed of the particle (the magnitude of the velocity of the particle). Finally, we define the variable \(\omega\) (“omega”) to be the rate of change of the angle, meaning that \(\omega\) is \(\dfrac{d\theta}{dt}\) and \(\omega\) is \(\dot{\theta}\). It should be clear that \(\omega\) is the spin rate for the imaginary line from the center of the circle to the particle. We call that spin rate the magnitude of the angular velocity of the line segment. (The expression angular velocity, \(\omega\), is more commonly used to characterize how fast and which way a rigid body, rather than an imaginary line, is spinning.) Rewriting \(v=r\dot{\theta}\) with \(\dot{\theta}\) replaced by \(\omega\) yields:

We are now in a position to derive an expression for that center-directed (centripetal) acceleration we were talking about at the start of this chapter. Consider a short time interval \(\Delta t\). (We will take the limit as \(\Delta t\) goes to zero before the end of this chapter.) During that short time interval, the particle travels a distance \(\Delta s\) along the circle and the angle that the line, from the center of the circle to the particle, makes with the reference line changes by an amount \(\Delta \theta\). Furthermore, in that time \(\Delta t\), the velocity of the particle changes from \(\vec{v}\) to \(\vec{v}'\), a change \(\Delta \vec{v}\) defined by \(vec{v}'=\vec{v}+\Delta\vec{v}\) depicted in the following vector diagram (in which the arrows representing the vectors \(\vec{v}\) and \(\vec{v}'\) have been copied from above with no change in orientation or length). Note that the small angle \(\Delta \theta\) appearing in the vector addition diagram is the same \(\Delta \theta\) that appears in the diagram above.

The magnitude of the centripetal acceleration, by definition, can be expressed as

Substituting this into our expression for \(a_c\) we have:

Now we invoke the small angle approximation from the mathematics of plane geometry, an approximation which becomes an actual equation in the limit as \(\Delta \theta\) approaches zero.

where \(\Delta\theta\) is in radians.

The small angle approximation allows us to write

Please sound the drum roll! This is the result we have been seeking. Note that by substituting \(r \omega\) for v, we can also write our result as