In this chapter we provide examples chosen to further familiarize you with Faraday’s Law of Induction and Lenz’s Law. The last example is the generator, the device used in the world’s power plants to convert mechanical energy into electrical energy.

I’m going to draw the given situation from a few different viewpoints, just to help you get used to visualizing this kind of situation. As viewed from above-and-to-the-southeast, the configuration (aside from the fact that magnetic field lines are invisible) appears as: where I included a sheet of paper in the diagram to help you visualize things.

Here’s a view of the same configuration from the south, looking due north: In presenting my solution to the example question, “What is the direction of the current induced in a horizontal loop that is due east of a straight wire carrying an increasing current due north?” I wouldn’t draw either one of the diagrams above. The first one takes too long to draw and there is no good way to show the direction of the current in the loop in the second one. The view from above is the most convenient one: 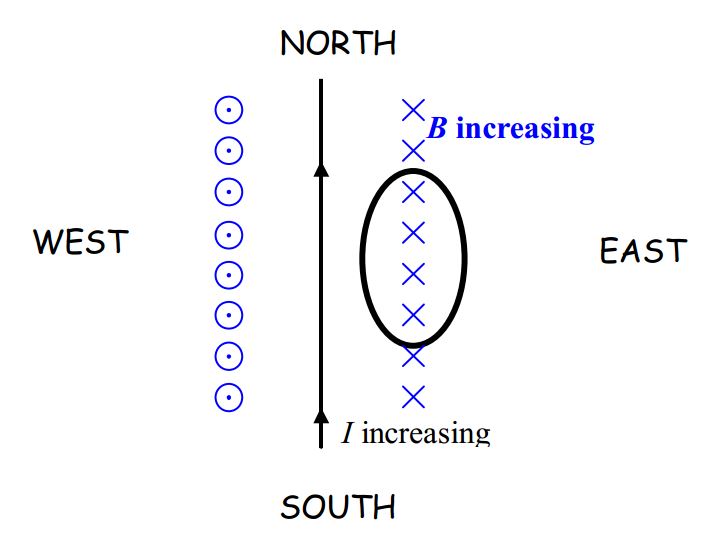 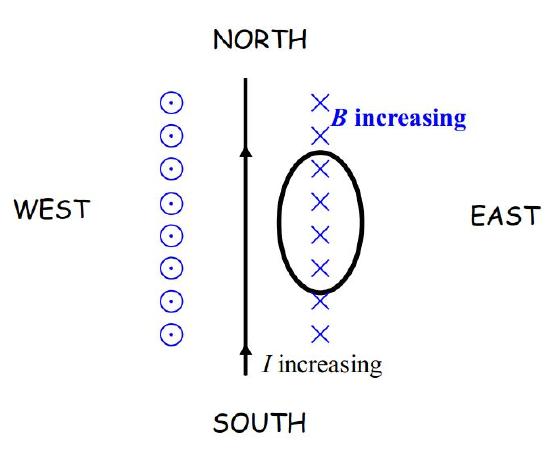 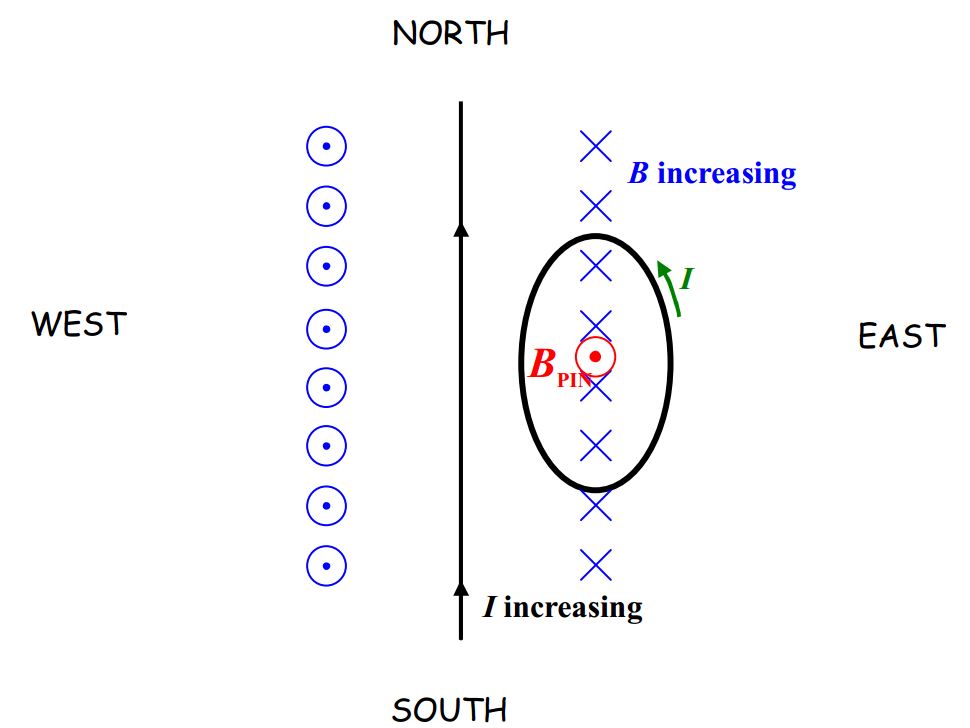 Hey. That’s the answer to the question. We’re done with that example. Here’s another one:

A person is moving a bar magnet, aligned north pole up, out from under a coil of wire, as
depicted below. What is the direction of the current in the resistor? The magnetic field of the bar magnet extends upward through the coil. 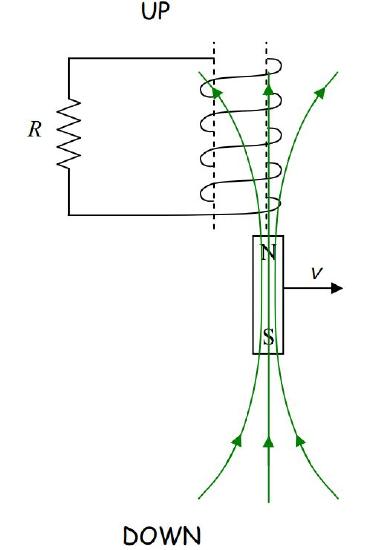 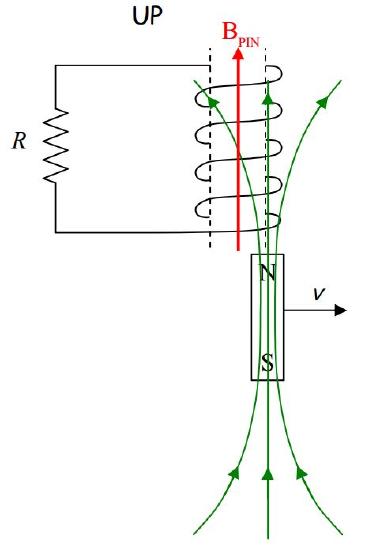 Because of the way the coil is wound, such a current will be directed out the top of the coil downward through the resistor. 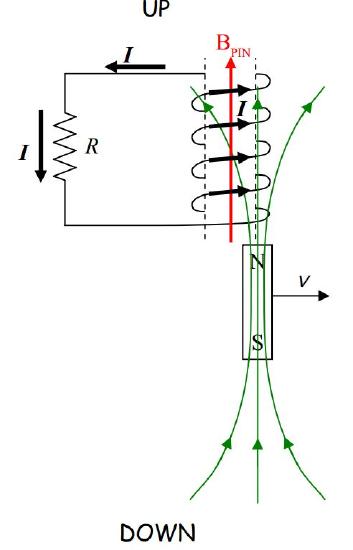 That’s the answer to the question posed in the example. (What is the direction of the current in the resistor?)

When you put two coils of wire near each other, such that when you create a magnetic field by using a seat of EMF to cause a current in one coil, that magnetic field extends through the region encircled by the other coil, you create a transformer. Let’s call the coil in which you initially cause the current, the primary coil, and the other one, the secondary coil. Okay, enough preamble, here’s the question: What is the direction of the transient current induced in the circuit above when the switch is closed?

Upon closing the switch, the current in the primary circuit very quickly builds up to \(\varepsilon/r\). While the time that it takes for the current to build up to \(\varepsilon/r\) is very short, it is during this time interval that the current is changing. Hence, it is on this time interval that we must focus our attention in order to answer the question about the direction of the transient current in resistor \(R\) in the secondary circuit. The current in the primary causes a magnetic field. Because the current is increasing, the magnetic field vector at each point in space is increasing in magnitude. 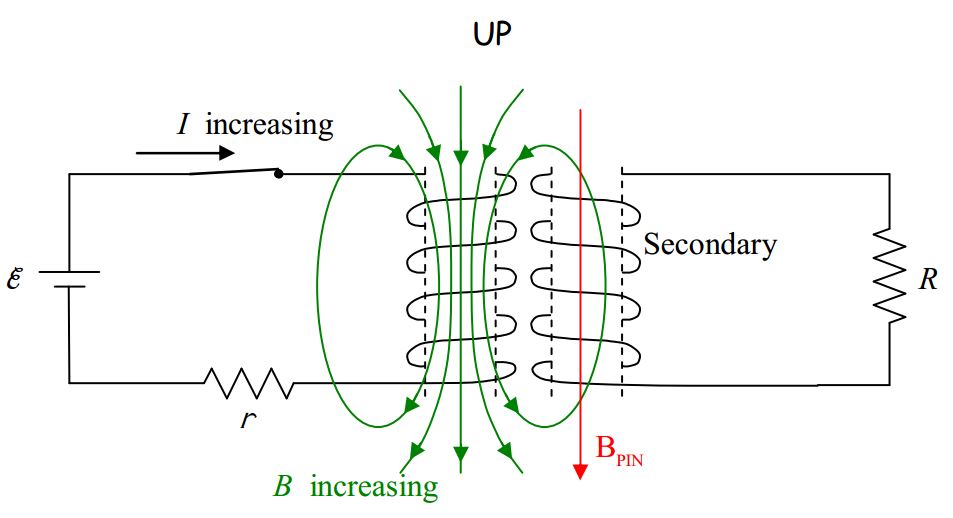 Okay. Now the question is, which way must the current be directed around the coil in order to create the downward-directed magnetic field \(\vec{B}_{PIN}\) that we have deduced it does create. As usual, the right-hand rule for something curly something straight reveals the answer. We point the thumb of the cupped right hand in the direction of \(\vec{B}_{PIN}\) and cannot fail to note that the fingers curl around in a direction that can best be described as “clockwise as viewed from above.” Because of the way the secondary coil is wound, such a current will be directed out of the secondary at the top of the coil and downward through resistor \(R\). This is the answer to the
question posed in the example.

Consider a magnet that is caused to rotate in the vicinity of a coil of wire as depicted below. 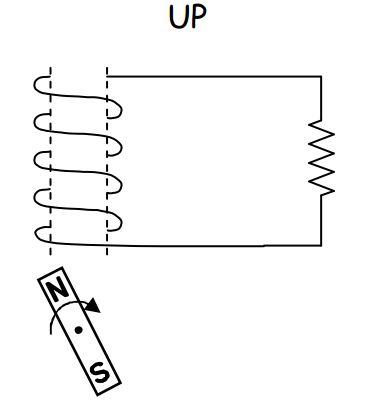 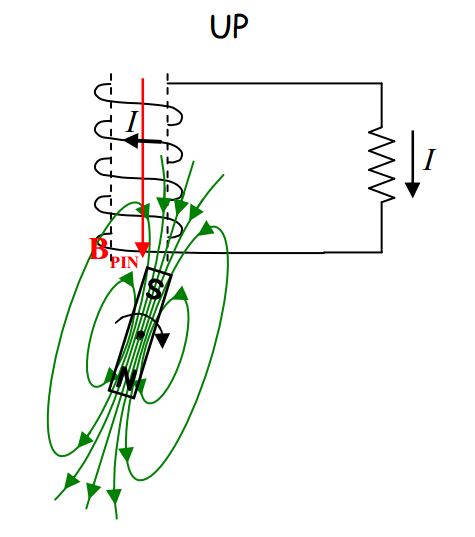 as the magnet rotates, the number of its magnetic field lines extending downward through the coil is decreasing. In accord with Faraday’s Law, this induces a current in the coil which, in accord with Ampere’s Law, produces a magnetic field of its own. By Lenz’s Law, the field (\(\vec{B}_{PIN}\)) produced by the induced current must be downward to make up for the loss of downwarddirected magnetic field lines through the coil. To produce \(\vec{B}_{PIN}\) downward, the induced current must be clockwise, as viewed from above. Based on the way the wire is wrapped and the coil is connected in the circuit, a current that is clockwise as viewed from above, in the coil, is directed out of the coil at the top of the coil and downward through the resistor.

In the following diagrams we show the magnet in each of several successive orientations. Keep in mind that someone or something is spinning the magnet by mechanical means. You can assume for instance that a person is turning the magnet with her hand. As the magnet turns the number of magnetic field lines is changing in a specific manner for each of the orientations depicted. You the reader are asked to apply Lenz’s Law and the Right Hand Rule for Something Curley, Something Straight to verify that the current (caused by the spinning magnet) through the resistor is in the direction depicted: 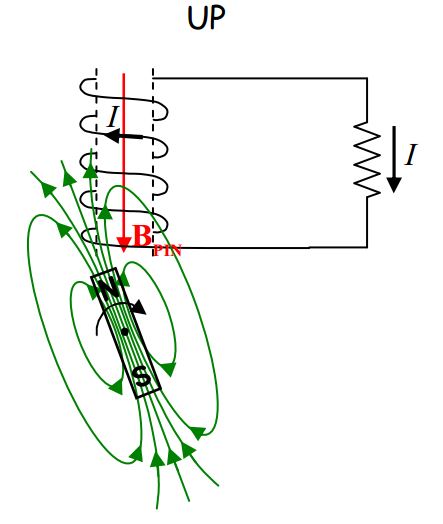 As the magnet continues to rotate clockwise, the next orientation it achieves is our starting point and the process repeats itself over and over again.

Recapping and extrapolating, the current through the resistor in the series of diagrams above, is: The EMF across the coil varies sinusoidally with time as:

The device that we have been discussing (coil-plus-rotating magnet) is called a generator, or more specifically, an electric generator. A generator is a seat of EMF that causes there to be a potential difference between its terminals that varies sinusoidally with time. The schematic representation of such a time-varying seat of EMF is:

Consider a “device which causes a potential difference between its terminals that varies sinusoidally with time” in a simple circuit: 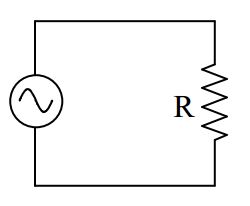 The time-varying seat of EMF causes a potential difference across the resistor, in this simple circuit, equal, at any instant in time, to the voltage across the time-varying seat of EMF. As a result, there is a current in the resistor. The current is given by \(I=\frac{V}{R}\), our defining equation for resistance, solved for the current \(I\). Because the algebraic sign of the potential difference across the resistor is continually alternating, the direction of the current in the resistor is continually alternating. Such a current is called an alternating current (\(AC\)). It has become traditional to use the abbreviation \(AC\)) to the extent that we do so in a redundant fashion, often referring to an alternating current as an \(AC\) current. (When we need to distinguish it from \(AC\), we call the “oneway” kind of current that, say, a battery causes in a circuit, direct current, abbreviated \(DC\).)

A device that causes current in a resistor, whether that current is alternating or not, is delivering energy to the resistor at a rate that we call power. The power delivered to a resistor can be expressed as \(P=IV\) where \(I\) is the current through the resistor and \(V\) is the voltage across the resistor. Using the defining equation of resistance, \(V=IR\), the power can be expressed as \(P=I^2R\). A “device which causes a potential difference between its terminals that varies sinusoidally with time”, what I have been referring to as a “time-varying seat of EMF” is typically referred to as an \(AC\) power source. An \(AC\) power source is typically referred to in terms of the frequency of oscillations, and, the voltage that a \(DC\) power source, an ordinary seat of EMF, would have to maintain across its terminals to cause the same average power in any resistor that might be connected across the terminals of the \(AC\) power source. The voltage in question is typically referred to as \(\varepsilon_{RMS}\) or \(V_{RMS}\) where the reasoning behind the name of the subscript will become evident shortly.

Since the power delivered by an ordinary seat of EMF is a constant, its average power is the value it always has. that would cause the same resistor power as the \(AC\) power source in question. The average power (which is just the power in the case of a \(DC\) circuit) is given by \(P_{AVG}=I \varepsilon_{RMS}\), which, by means of our defining equation of resistance solved for \(I\), \(I=V/R\), (where the voltage across the resistor is, by inspection, \(\varepsilon_{RMS}\) ) can be written \(P_{AVG}=\frac{\varepsilon^2_{RMS}}{R}\). So far, this is old stuff, with an unexplained name for the EMF voltage. Now let’s consider the \(AC\) circuit:

More on the Transformer

The Electrical Power in Your House

which can be written as,