\(E\) is the magnitude of the electric field at a point in space,

\(q\) is the charge of the particle that we have been calling the point charge, and

Again, Coulomb’s Law is referred to as an inverse square law because of the way the magnitude of the electric field depends on the distance that the point of interest is from the source charge. There are a few of important points to be made here. The first one is probably pretty obvious to you, but, just to make sure: The electric field exists between the electric field lines—its existence there is implied by the lines that are drawn—we simply can’t draw lines everywhere that the electric field does exist without completely blackening every square inch of the diagram. Thus, a charged victim that finds itself at a position in between the lines will experience a force as depicted below for each of two different positively-charged victims. The next point is a reminder that a negatively-charged particle that finds itself at a position at which an electric field exists, experiences a force in the direction exactly opposite that of the electric field at that position. 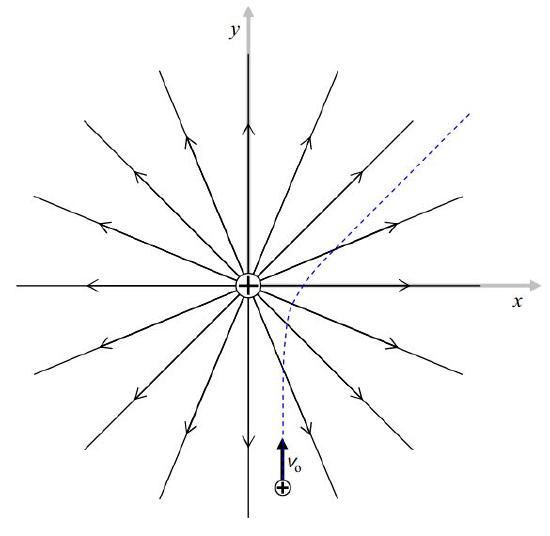 Here is an example of a trajectory of a negatively-charged particle, again for one set of values of source charge, victim charge, victim mass, and victim initial velocity: Some General Statements that can be made about Electric Field Lines

The following useful facts about electric field lines can be deduced from the definitions you have already been provided:

Suppose, for instance, that you were asked to find the magnitude and direction of the electric field vector at point \(P\) due to the two charges depicted in the diagram below: 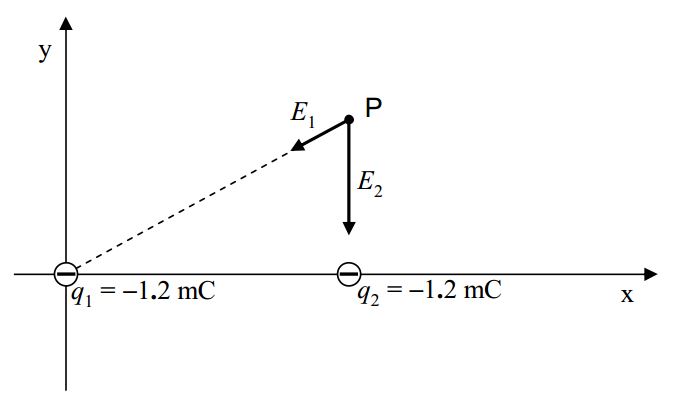 The angle \(\theta\) specifying the direction of \(\vec{E}_1\) can be determined by analyzing the shaded triangle in the following diagram. to get the magnitude of \(\vec{E}_1\). Based on the given coordinates, the value of \(r_2\) is apparent by inspection and we can use it in