Do you remember Archimedes’s Principle? We were able to say something simple, specific, and useful about a complicated phenomenon. The gross idea was that a submerged object being pressed upon on every surface element in contact with fluid, by the fluid, experiences a net upward force because the pressure in a fluid is greater at greater depth. The infinite sum, over all the surface area elements of the object in contact with the fluid, of the force of magnitude pressure-times-the area, and direction normal to and into the area element, resulted in an upward force that we called the buoyant force. The thing is, we were able to prove that the buoyant force is equal in magnitude to the weight of that amount of fluid that would be where the object is if the object wasn’t there. Thus we can arrive at a value for the buoyant force without having to even think about the vector integration of pressure-related force that causes it.

We are about to encounter another complicated phenomenon which can be characterized in a fruitful fashion by a relatively simple rule. I’m going to convey the idea to you by means of a few specific processes, and then sum it up by stating the simple rule. It is important to note that the magnetic field lines are most densely packed inside the bar magnet.

Now suppose that the person, holding the magnet at rest in one hand, moves the loop upward. I want to focus on what is going on while she is moving it upward. As she moves the loop upward, she is moving it roughly along the direction of the magnetic file lines, but, and this is actually the important part, that loop will also be “cutting through” some magnetic field lines. Consider an instant in time when the loop is above the magnet, and moving upward: 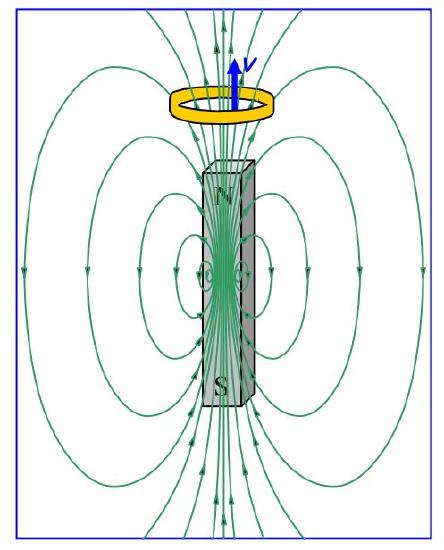 where it is important to realize that none of those magnetic field lines begin on the magnet or end at the tip of the arrow depicted, rather, they extend out of the magnet toward us, flower out and over, back down away from us, and then they loop around to enter the south pole of the magnet from which they extend back up through the magnet toward us. In fact, no magnetic field line ever begins or ends anywhere. They all form closed loops. This is a manifestation of the fact that there is no such thing as magnetic charge. (There are no magnetic monopoles.) Here’s where we’re going with this: The motion of the ring relative to the magnet is going to cause a current in the ring. Here’s how: The ring is neutral, but, it is chock full of charged particles that are free to move around within the gold. [I’m going to discuss it in our positive charge carrier model but you can verify that you get the same result if the charge carriers are negative (recalling that our current is in the direction opposite that in which negative charge carriers are moving.)] Pick any short segment of the ring and get the direction of the force exerted on the charge carriers of that segment using \(\vec{F}=q\vec{v}\times \vec{B}\) and the right-hand rule for the cross product of two vectors. In the view from above, all we can see is the horizontal component of the magnetic field vectors in the vicinity of the moving ring but that’s just dandy; the vertical component, being parallel to the ring’s velocity (and hence parallel to the velocity of the charge in the ring), makes no contribution to \(\vec{v}\times \vec{B}\). Now, pick your segment of the ring. Make your fingers point away from your elbow, and, in the direction of the first vector (the velocity vector) in \(\vec{v}\times \vec{B}\), namely, “out of the page”. Now, keeping your fingers pointing both away from your elbow, and, out of the page, rotate your forearm as necessary so that your palm is facing in the direction of \(\vec{B}\) (at the location of the segment you are working on), meaning that if you were to close your fingers, they would point in the direction of \(\vec{B}\). Your extended thumb is now pointing in the direction of the force exerted on the positive charge carriers in the ring segment you chose. No matter what ring segment you pick, the force is always in that direction which tends to push the positive charge carriers counterclockwise around the ring! The result is a counterclockwise (as viewed from above) current in the ring.

When the person holding the magnet and the ring moved the ring upward, there was a current in the ring. Now we have established that if, instead of moving the ring, she moves the magnet downward at the same speed, she will get the same current in the ring. Based on what caused that current, the \(\vec{F}=q\vec{v}\times \vec{B}\) force on the charged particles in the ring, you can surmise that the current will depend on things like the velocity of the ring relative to the magnet, the strength of the magnetic field, and the relative orientation of the velocity vector and the magnetic field. It has probably occurred to you that the current also depends on the resistance of the ring.

Michael Faraday came up with a very fruitful way of looking at the phenomenon we are discussing and I will convey his idea to you by means of the example we have been working with.

Looking at the diagrams of that ring moving relative to the magnet again, I’m going to call the statement I have just attributed to Faraday, the conceptual form of Faraday’s Law. In other words, Faradays Law, in conceptual form is: A changing number of magnetic field lines through a closed loop or coil causes a current in that loop or coil, and, the faster the number is changing, the greater the current. This is a graphical representation of the magnitude of that component of the magnetic field which is directed straight at you.

Suppose the scale of the diagram to be given by (\(1\mu T\cdot m^2\))n where n is the magnetic field line density, the number-of-magnetic-field-lines-per-area, directed through the plane represented by the page, straight at you. Let’s use a square, one centimeter on a side, to sample the field at a position near the center, Using the given scale factor,

So the number of lines through a loop encircling a plane region of area \(A\) is proportional to \(BA\), with the constant of proportionality being the reciprocal of our scale factor for the field diagram. The simple product \(BA\) is really only good if the magnetic field lines are “hitting” the area encircled by the loop “head on,” and, if the magnetic field is single-valued over the whole area. We can take care of the “which way the loop is facing” issue by replacing \(BA\) with \(\vec{B}\cdot \vec{A}\) where \(\vec{A}\), the area vector, is a vector whose magnitude is the area of the plane region encircled by the loop and whose direction is perpendicular to the plane of the loop. There are actually two directions that are perpendicular to the loop. One is the opposite of the other. In practice, one picks one of the two directions arbitrarily, but, picking a direction for the area vector establishes a positive direction for the current around the loop. The positive direction for the current is the direction around the loop that makes the current direction and the area vector direction, together, conform to the right-hand rule for something curly something straight. We take care of the possible variation of the magnetic field over the region enclosed by the loop, by cutting that plane region up into an infinite number of infinitesimal area elements \(dA\), calculating \(\vec{B}\cdot \vec{dA}\) for each area element, and adding up all the results. The final result is the integral \(\int \vec{B}\cdot \vec{dA}\). You won’t be held responsible for using the calculus algorithms for analyzing such an integral, but, you are responsible for knowing what \(\int \vec{B}\cdot \vec{dA}\) means. It is the infinite sum you get when you subdivide the area enclosed by the loop up into an infinite number of infinitesimal area elements, and, for each area element, dot the magnetic field vector at the location of that area element into the area vector of that area element, and add up all the resulting dot products. You also need to know that, in the special case of a magnetic field that is constant in both magnitude and direction over the entire area enclosed by the loop, \(\int \vec{B}\cdot \vec{dA}\) is just \(\vec{B}\cdot \vec{A}\).

The magnetic flux is given the name \(\Phi_B\) (the Greek letter upper case phi).

The expression yields \(T\cdot m^2\) as the units of magnetic flux. This combination of units is given a name, the Weber, abbreviated Wb.

Faraday’s Law, the one that says that the current induced in a loop or coil is proportional to the rate of change in the number of magnetic field lines encircled by the loop or coil, can be written in terms of the flux as:

\(R\) is the resistance of the loop or coil.

The derivative of a function with respect to time is often abbreviated as the function itself with a dot over it. In other words,

Using this notation in our expression for the current in Faradays Law of induction we have:

Faraday’s Law is usually expressed in terms of an EMF rather than a current. I’m going to use a specific case study to develop the idea which is of general applicability. Consider a coil of ideally-conducting wire in series with a resistor. For closure of the loop, the resistor is to be considered part of the loop (and hence is the resistance of the loop), but, we have a negligible number of magnetic field lines cutting through the resistor itself. Suppose there to be an increasing magnetic flux directed upward through the coil. By Faraday’s Law of Induction, there will be a current \(I=-\frac{N}{R} \dot{\Phi_B}\) induced in the coil. The charge will flow around and around the coil, out the top of the coil and down through the resistor. But, for a resistor to have a current in it, there must be a potential difference \(V=IR\) between the terminals of the resistor. which we can write as