As the name and context imply, thin-film interference is another interference phenomenon involving light. Here’s the picture, as viewed from above: 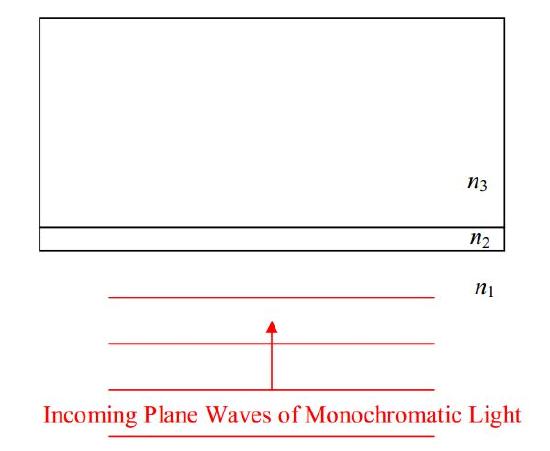 Involved are three transparent media: medium 1, medium 2, and medium 3, of index of refraction \(n_1\) , \(n_2\) , and \(n_3\) , respectively. (In general, a medium is a substance, but, in this context, vacuum is also considered a medium. The index of refraction n of a medium is the ratio of the speed of light in vacuum to the speed of light in that medium.) The phenomenon occurs whether or not \(n_1 = n_3\) , but, \(n_2\) must be different from \(n_1\) and \(n_3\). Medium 2 is the “thin film.” For thin-film interference to occur, the thickness of medium 2 must be on the order of the wavelength of the light. (The actual maximum thickness for which thin-film interference can occur depends on the coherence of the light.)

Here’s the deal: Under most circumstances, when light encounters a smooth interface between two transparent media, some of the light goes through (transmitted light) and some of the light bounces off (reflected light). In the thin-film arrangement of three transparent media depicted above, for certain thicknesses of the thin film (medium 2) all the light can be reflected, and, for certain other thicknesses, all the light can be transmitted. You see this phenomenon when looking at soap bubbles, and sometimes when looking at puddles in the road (when there is a thin layer of oil on top of the water). Humans take advantage of the phenomenon by putting a thin coating of a transparent substance on lenses such as camera lenses and binocular lenses, a layer of just the right thickness for maximum transmission.

Based on the situations in which it occurs, it should be clear that we do not need monochromatic light to make thin-film interference happen. However, I am going to discuss it in terms of monochromatic light to get the idea across. Once you understand it in terms of monochromatic light, you can apply it to white light (a mixture of all the visible frequencies) to answer questions such as, “What wavelength of incoming white light will experience maximum reflection?” The answer helps one understand the rainbow of colors you might see on the surface of a puddle in broad daylight. You put a clear layer of gasoline on top of a clear puddle of water and thin-film interference results in maximal constructive interference of the reflected light, at certain wavelengths.

Based on your experience with soap bubbles and puddle surfaces, you know that the light does not have to be normally incident upon the interface between transparent media in order for thin-film interference to occur. However, the analysis is easier for the case of normal incidence, so, in this chapter, I am going to limit our analysis to the case of normal incidence. Now back to the thin-film setup: Now, while that is going on, the next crest from the incoming wave is traveling forward at speed \(v_1=c/n_1\). It arrives at the same interface (between medium 1 and medium 2) at time

where \(\lambda_1\) is the wavelength of the light while it is traveling in medium 1. (Remember, the source establishes the frequency of the light and that never changes, but, from \(v=\lambda f\), the wavelength depends on the speed of the wave in the medium in which the light is traveling.) For constructive interference (under no phase-reversal conditions), we must have

\(\lambda_2\) is the in-the-thin-film wavelength of the light, and,

\(thickness\) is the thickness of the thin film.

which can be written as:

To get a maximum when we have phase reversal at one, and only one, interface, we need the path difference (twice the thickness) to be half a wavelength-in-the-film,

or that, plus, an integer number of full wavelengths-in-the-film:

This is also the condition for completely destructive interference for the case of no phase reversal, or, phase reversal at both interfaces. This is exactly what we want for a camera lens that is to be used in air (\(n_1 = 1.00\)). Consider a clear plastic medium of index of refraction \(n_2 = 1.3\). Now consider the wavelength that light from the middle of the visible spectrum (green light) would have in that medium. Put a coating of the plastic, one quarter as thick as that wavelength is long, on a lens made of glass having an index of refraction \(n_3 = 1.5\) . (Note that we have phase reversal at both interfaces.) With that coating, the lens reflects none of the light of the specified wavelength that is normally incident on the lens (and a reduced amount of light of nearby wavelengths). That is, it transmits more of the light than it would without the coating. This is the desired effect.