1. Some of the energy being used to recharge the battery will be dissipated as heat by the internal resistance.

5. It would probably be better to be in series because the current will be less than if it were in parallel.

7. two filaments, a low resistance and a high resistance, connected in parallel

13. The voltmeter would put a large resistance in series with the circuit, significantly changing the circuit. It would probably give a reading, but it would be meaningless.

15. The ammeter has a small resistance; therefore, a large current will be produced and could damage the meter and/or overheat the battery.

17. The time constant can be shortened by using a smaller resistor and/or a smaller capacitor. Care should be taken when reducing the resistance because the initial current will increase as the resistance decreases.

19. Not only might water drip into the switch and cause a shock, but also the resistance of your body is lower when you are wet. 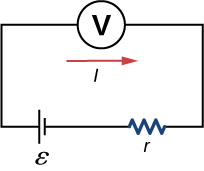 d. As \(\displaystyle R_L\) is lowered, the power difference decreases; therefore, at higher volumes, there is no significant difference.

b. No, there is only one independent equation, so only r can be found.

b. No, in practice it would not be difficult to limit the capacitance to less than 100 nF, since typical capacitors range from fractions of a picofarad (pF) to milifarad (mF).

b. It would not be necessary to take extra precautions regarding the power coming from the wall. However, it is possible to generate voltages of approximately this value from static charge built up on gloves, for instance, so some precautions are necessary.

b. You cannot have negative resistance.

c. The assumption that \(\displaystyle R_{eq}<R_1\) is unreasonable. Series resistance is always greater than any of the individual resistances.

d. No, this change does not seem significant. It probably would not be noticed.