Many of us have looked up at night and seen what is commonly called a falling or shooting star. These usually-fast flashes are particles entering the Earth’s atmosphere at tremendous speeds. We see the particle ionize as it travels through the atmosphere, leaving the streak of light. During a meteor shower — such as the Perseids in August and the Leonids in November — Earth passes through dust left behind as comets orbit the Sun. These meteor showers can produce around a hundred falling stars an hour, if conditions are just right.

Occasionally, these space vagabonds make it to the surface of Earth (or other Solar System body). They are now called meteorites. As a review of terms:

Comets are best described as snowy dirtballs. They are composed of ices, silicated materials, carbon, and other compounds such as ammonium hydroxide. When a comet approaches the Sun, it can form a tail of gas, dust, or both. Asteroids are a group of the Solar System’s minor bodies that are much like the Rocky Planets in composition: carbon-rich, silicate materials (rock) and/or metal (primarily iron and nickel). Meteoroids are also materials orbiting in space, and are smaller than asteroids.

Meteors are the streaks we see in the sky, commonly called shooting or falling stars ; also, can be fireballs and/or bolides. The root word meteor is derived from the Greek word meteōros , which means high in the air . Most meteor showers are comet dust particles left behind as a comet orbits the Sun. Earth runs into this trail of dust as we orbit the Sun. 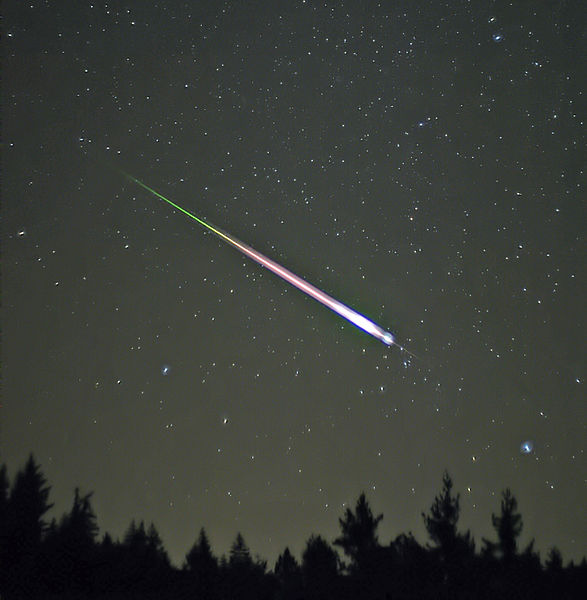 Meteorites are materials that makes it to the surface of a planet, satellite, etc. There are three major groups or classes of meteorites, based on their make-up.