A railway train trundles towards the east at speed \( \nu_{1}\), and a passenger strolls towards the front at speed \( \nu_{2}\). What is the speed of the passenger relative to the railway station? We might at first be tempted to reply: “Why, \( \nu_{1}+\nu_{2}\) of course.” In this section we shall show that the answer as predicted from the Lorentz transformations is a little less than this, and we shall develop a formula for calculating it. We have already discussed (in Section 15.6) our answer to the objection that this defies common sense. We pointed out there that the answer (to the perfectly reasonable objection) that “at the speeds we are accustomed to we would hardly notice the difference” is not a satisfactory response. The reason that the resultant speed is a little less than \( \nu_{1}+\nu_{2}\) results from the way in which we have defined the Lorentz transformations between references frames and the way in which distances and time intervals are defined with reference to reference frames in uniform relative motion What is the velocity of the particle in \( \Sigma\)?

The inverse is obtained by interchanging the primed and unprimed symbols and reversing the sign of \( \nu\).

The \( y\)-component is found in an exactly similar manner, and I leave its derivation to the reader. The result is 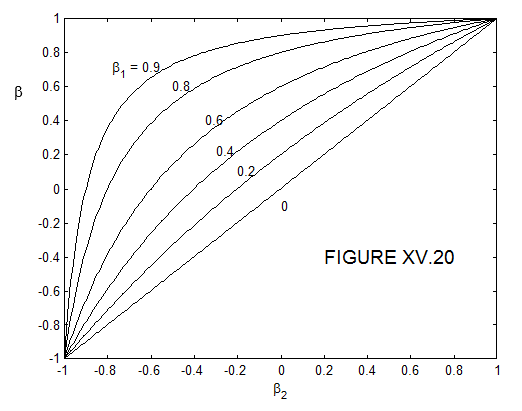 Thus I can represent the speed of an object by giving the value of \( \phi\), where

The factor \( \phi\) combines simply as

If you did what I suggested in Section 15.3 and programmed your calculator or computer to convert instantly from one relativity factor to another, you now have a quick way of adding speeds.

There are several ways in which you could do this problem. One is to develop a general algebraic method of combining two gamma factors. Thus:

Show that two gamma factors combine according to

I’ll leave you to try that. The other way is to take advantage of the programme you wrote when you read Section 15.3, by which you can instantaneously convert one relativity factor to another. Thus you instantly convert the gammas to phis.