When thinking about how to reduce acceleration and the associated forces we should reexamine the definition of average acceleration:

From the above definitions we see that there are really two options for reducing accelerations. We can reduce the amount that velocity changes, or we can increase the time over which the velocity changes (or both). Avoiding the large velocity changes that occur during car accidents by driving safe and not driving distracted is a good start. Driving at reasonable speed will reduce the change in velocity incurred if an accident does in fact happen. Minimizing collisions with other objects moving at high speed is also essential, especially when forces are applied directly to the head (headers in soccer, helmet-to-helmet collisions in American football).

Of course we could simply avoid any situation involving high speed in order to avoid risking large changes in velocity, but then we would have to avoid riding in cars, running, or any situation in which we might trip and fall down. Avoiding high velocity all together would not be practical or fun. Assuming we do experience high velocities, then in many cases the change in velocity is defined by the situation, such as a car coming to rest during an accident or a person landing after a fall, or keys being dropped from a 3rd story apartment window. In such cases we need to focus on increasing the time over which the velocity changes in order to reduce the average acceleration and average net force. Said another way, a small net force experienced over a long time can be used to produce the same velocity change as a large net force experienced over a short time.

Throw an egg up into the air and catch it. Did you move your hands with the egg as you caught it on the return, or did you hold your hands still as the egg arrived?

Most of us have learned from experience how to reduce the force on objects as we control their motion. In my experience, toddlers do not apply this technique.

Everyday Examples: Landing after a Jump

You naturally tend to bend your knees when landing after a jump, rather than keep your knees locked and your legs rigid. The reason is that rigid legs bring you to an abrupt stop, but bending your knees allows you to spread the landing out over a longer time, which we have just learned, reduces the average force.

Stiff and bent-leg landings that produced the force vs. time data shown below.

The force vs. time graphs show the normal force applied to a person when landing on one foot after stepping off from a 0.1 m height as seen in the previous GIF. The graph on the left was the more rigid leg landing (it didn’t feel good) and the graph on the right was a bent-knee landing. 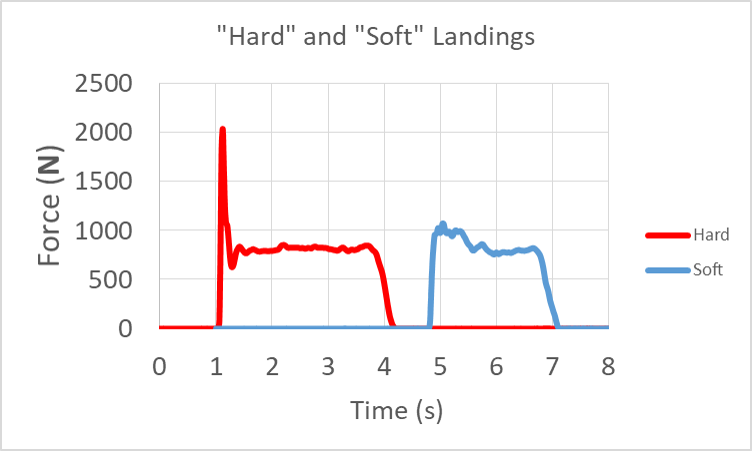 Force vs. time data for a stiff-legged landing (red) and crouching landing (blue).

Notice that the stiff-legged “hard” landing nearly doubled the peak force applied to the body.

The people in this video are well aware of techniques for reducing forces by extending impact time. A YouTube element has been excluded from this version of the text. You can view it online here: openoregon.pressbooks.pub/bodyphysics/?p=2068

We see from the graph in the previous everyday example that the force varies during an impact and it’s often the peak force that we are really worried about with regard to injury prevention. This complicates the quantitative analysis of our force-reducing strategies, however we recognize that lowering the peak force in turn lowers the average force so we will analyze force-reducing strategies in terms of the average force. We start with our definition for average acceleration:

Then we can use Newton's Second Law to relate the average acceleration and average force:

Finally we can rearrange the result as needed to solve our problem. For example, if we want to know the time over which to extend an impact to keep the average force below a certain value, we could rearrange to get:

Of course we can always write out

if it helps us solve a problem:

An everyday example in the previous unit helped us to determine that when a friend drops a set of keys to us from 35 ft up in their third story apartment, the keys will arrive at 47 ft/s (32 MPH, or 14 m/s). We also mentioned that the keys smacking our hands at that speed would hurt, but that we would soon learn about strategies to prevent injury. We have arrived at that point. Now we know what to do: extend the time over which we bring the keys to rest and we will reduce the average (and peak) force applied to the keys. By Newton's Third Law, we know that the force on the keys is equal and opposite to the force on our hands, so analyzing the force on the keys tells us about the force on our hand. Let’s get quantitative and approximate the impact time necessary to prevent damage to our hand. We will use the equation above, which we solved for

First we need to estimate the force needed to break skin. If we placed a key on-edge on top of our hand and someone stood on it, that would likely cause injury. If we instead placed a 5 lb textbook on the key it probably would not break the skin or even really hurt, so let’s aim to keep the average force on the keys (and thus our hand) below 5 lbs, or 22 N. However, we know the peak force could be several times bigger than the average force, so let’s include a safety factor of 10 and keep the force below 2.2 N. Now that we have a force value to work with, we just need a mass for the keys, which would be about 0.050 kg as you can see in this video of someone putting a car key on a scale. Now we can enter these values into our equation, being careful about our choice of directions. Let’s say downward is the negative direction so our initial velocity is -14 m/s and the upward force on the keys from our hand is positive. Of course the final velocity of the key is zero after we catch them.

We need to move our hands with the keys as we catch them to ensure that our “soft catch” lasts for 0.32 s (about 1/3 of a second).