Variety is the spice of life, not of science. So far this chapter has focused on heat energy, kinetic energy, and gravitational energy, but it might seem that in addition to these there is a bewildering array of other forms of energy. Gasoline, chocolate bars, batteries, melting water --- in each case there seems to be a whole new type of energy. The physicist's psyche rebels against the prospect of a long laundry list of types of energy, each of which would require its own equations, concepts, notation, and terminology. The point at which we've arrived in the study of energy is analogous to the period in the 1960's when a half a dozen new subatomic particles were being discovered every year in particle accelerators. It was an embarrassment. Physicists began to speak of the “particle zoo,” and it seemed that the subatomic world was distressingly complex. The particle zoo was simplified by the realization that most of the new particles being whipped up were simply clusters of a previously unsuspected set of fundamental particles (which were whimsically dubbed quarks, a made-up word from a line of poetry by James Joyce, “Three quarks for Master Mark.”) The energy zoo can also be simplified, and it's the purpose of this section to demonstrate the hidden similarities between forms of energy as seemingly different as heat and motion.

What is heat really? Is it an invisible fluid that your bare feet soak up from a hot sidewalk? Can one ever remove all the heat from an object? Is there a maximum to the temperature scale?

The theory of heat as a fluid seemed to explain why colder objects absorbed heat from hotter ones, but once it became clear that heat was a form of energy, it began to seem unlikely that a material substance could transform itself into and out of all those other forms of energy like motion or light. For instance, a compost pile gets hot, and we describe this as a case where, through the action of bacteria, chemical energy stored in the plant cuttings is transformed into heat energy. The heating occurs even if there is no nearby warmer object that could have been leaking “heat fluid” into the pile.

An alternative interpretation of heat was suggested by the theory that matter is made of atoms. Since gases are thousands of times less dense than solids or liquids, the atoms (or clusters of atoms called molecules) in a gas must be far apart. In that case, what is keeping all the air molecules from settling into a thin film on the floor of the room in which you are reading this book? The simplest explanation is that they are moving very rapidly, continually ricocheting off of the floor, walls, and ceiling. Though bizarre, the cloud-of-bullets image of a gas did give a natural explanation for the surprising ability of something as tenuous as a gas to exert huge forces.

a / A vivid demonstration that heat is a form of motion. A small amount of boiling water is poured into the empty can, which rapidly fills up with hot steam. The can is then sealed tightly, and soon crumples.

b / Random motion of atoms in a gas, a liquid, and a solid.

This type of observation leads naturally to the conclusion that hotter matter differs from colder in that its atoms' random motion is more rapid. In a liquid, the motion could be visualized as people in a milling crowd shoving past each other more quickly. In a solid, where the atoms are packed together, the motion is a random vibration of each atom as it knocks against its neighbors.

We thus achieve a great simplification in the theory of heat. Heat is simply a form of kinetic energy, the total kinetic energy of random motion of all the atoms in an object. With this new understanding, it becomes possible to answer at one stroke the questions posed at the beginning of the section. Yes, it is at least theoretically possible to remove all the heat from an object. The coldest possible temperature, known as absolute zero, is that at which all the atoms have zero velocity, so that their kinetic energies, \(K=(1/2)mv^2\), are all zero. No, there is no maximum amount of heat that a certain quantity of matter can have, and no maximum to the temperature scale, since arbitrarily large values of \(v\) can create arbitrarily large amounts of kinetic energy per atom.

The kinetic theory of heat also provides a simple explanation of the true nature of temperature. Temperature is a measure of the amount of energy per molecule, whereas heat is the total amount of energy possessed by all the molecules in an object.

There is an entire branch of physics, called thermodynamics, that deals with heat and temperature and forms the basis for technologies such as refrigeration. Thermodynamics is discussed in more detail in chapter 5, and I've provided here only a brief overview of the thermodynamic concepts that relate directly to energy.

2.4.2 All energy comes from particles moving or interacting.

If I stretch the spring in figure c and then release it, it snaps taut again. The creation of some kinetic energy shows that there must have been some other form of energy that was destroyed. What was it?

c / The spring's energy is really due to electrical interactions among atoms.

We could just invent a new type of energy called “spring energy,” study its behavior, and call it quits, but that would be ugly. Are we going to have to invent a new forms of energy like this, over and over? No: the title of this book doesn't lie, and physics really is fundamentally simple. As shown in figure d, when we bend or stretch an object, we're really changing the distances between the atoms, resulting in a change in electrical energy. Electrical energy isn't really our topic right now --- that's what most of the second half of this book is about --- but conceptually it's very similar to gravitational energy. Like gravitational energy, it depends on \(1/r\), although there are some interesting new phenomena, such as the existence of both attraction and repulsion, which doesn't occur with gravity because gravitational mass can't be negative. The real point is that all the apparently dissimilar forms of energy in figure d turn out to be due to electrical interactions among atoms. 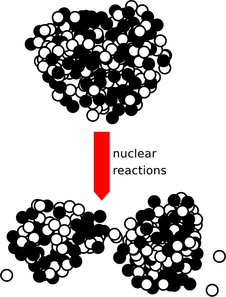 e / This figure looks similar to the previous ones, but the scale is a million times smaller. The little balls are the neutrons and protons that make up the tiny nucleus at the center of a uranium atom. When the nucleus splits (fissions), the source of the kinetic energy is partly electrical and partly nuclear.

Even if we wish to include nuclear reactions (figure e) in the picture, there still turn out to be only four fundamental types of energy:

Astute students have often asked me how light fits into this picture. This is a very good question, and in fact it could be argued that it is the basic question that led to Einstein's theory of relativity as well as the modern quantum picture of nature. Since these are topics for the second half of the book, we'll have to be content with half an answer at this point. For now, we may think of light energy as a form of kinetic energy, but one calculated not according to \((1/2)mv^2\) but by some other equation. (We know that \((1/2)mv^2\) would not make sense, because light has no mass, and furthermore, high-energy beams of light do not differ in speed from low-energy ones.)

◊ I'm not making this up. XS Energy Drink has ads that read like this: All the “Energy” ... Without the Sugar! Only 8 Calories!” Comment on this.”