Let's revisit the example of the stretched spring from the previous section. We know that its energy is a form of electrical energy of interacting atoms, which is nice conceptually but doesn't help us to solve problems, since we don't know how the energy, \(U\), depends on the length of the spring. All we know is that there's an equilibrium (figure a/1), which is a local minimum of the function \(U\). An extremely important problem which arises in this connection is how to calculate oscillatory motion around an equilibrium, as in a/4-13. Even if we did special experiments to find out how the spring's energy worked, it might seem like we'd have to go through just as much work to deal with any other kind of oscillation, such as a sapling swinging back and forth in the breeze. a / The spring has a minimum-energy length, 1, and energy is required in order to compress or stretch it, 2 and 3. A mass attached to the spring will oscillate around the equilibrium, 4-13.

Surprisingly, it's possible to analyze this type of oscillation in a very general and elegant manner, as long as the analysis is limited to small oscillations. We'll talk about the mass on the spring for concreteness, but there will be nothing in the discussion at all that is restricted to that particular physical system. First, let's choose a coordinate system in which \(x=0\) corresponds to the position of the mass where the spring is in equilibrium, and since interaction energies like \(U\) are only well defined up to an additive constant, we'll simply define it to be zero at equilibrium:

Since \(x=0\) is an equilibrium, \(U(x)\) must have a local minimum there, and a differentiable function (which we assume \(U\) is) has a zero derivative at a local minimum: 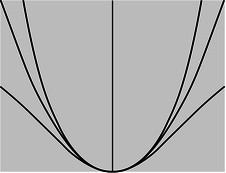 There are still infinitely many functions that could satisfy these criteria, including the three shown in figure b, which are \(x^2/2\), \(x^2/2(1+x^2)\), and \((e^{3x}+e^{-3x}-2)/18\). Note, however, how all three functions are virtually identical right near the minimum. That's because they all have the same curvature. More specifically, each function has its second derivative equal to 1 at \(x=0\), and the second derivative is a measure of curvature. We write \(k\) for the second derivative of the energy at an equilibrium point,

Now we're ready to analyze the mass-on-a-spring system, while keeping in mind that it's really only a representative example of a whole class of similar oscillating systems. We expect that the motion is going to repeat itself over and over again, and since we're not going to include frictional heating in our model, that repetition should go on forever without dying out. The most interesting thing to know about the motion would be the period, \(T\), which is the amount of time required for one complete cycle of the motion. We might expect that the period would depend on the spring constant, \(k\), the mass, \(m\), and and the amplitude, \(A\), defined in figure c.11

c / The amplitude would usually be defined as the distance from equilibrium to one extreme of the motion, i.e., half the total travel.

In examples like the brachistochrone and the Apollo 11 mission, it was generally necessary to use numerical techniques to determine the amount of time required for a certain motion. Once again, let's dust off the time3 function from page 93 and modify it for our purposes. For flexibility, we'll define the function \(U(x)\) as a separate Python function. We really want to calculate the time required for the mass to come back to its starting point, but that would be awkward to set up, since our function works by dividing up the distance to be traveled into tiny segments. By symmetry, the time required to go from one end to the other equals the time required to come back to the start, so we'll just calculate the time for half a cycle and then double it when we return the result at the end of the function. The test at lines 16-19 is necessary because otherwise at the very end of the motion we can end up trying to take the square root of a negative number due to rounding errors.

Even though the mass had to travel double the distance in each direction, the period is the same to within the numerical accuracy of the calculation!

With these hints, it seems like we should start looking for an algebraic solution. For guidance, here's a graph of \(x\) as a function of \(t\), as calculated by the osc function with n=10. This looks like a cosine function, so let's see if a \(x=A\cos{}(\omega{}t+\delta)\) is a solution to the conservation of energy equation --- it's not uncommon to try to “reverse-engineer” the cryptic results of a numerical calculation like this. The symbol \(\omega=2\pi/T\) (Greek omega), called angular frequency, is a standard symbol for the number of radians per second of oscillation. Except for the factor of \(2\pi\), it is identical to the ordinary frequency \(f=1/T\), which has units of \(\text{s}^{-1}\) or Hz (Hertz). The phase angle \(\delta\) is to allow for the possibility that \(t=0\) doesn't coincide with the beginning of the motion. The energy is