The radiation pattern of a transmitting antenna describes the magnitude and polarization of the field radiated by the antenna as a function of angle relative to the antenna. A pattern may also be defined for a receiving antenna, however, we defer discussion of the receive case to a later section.

The concept of radiation pattern is closely related to the concepts of directivity and gain (Section 10.7). The principal distinction is the explicit consideration of polarization. In many applications, the polarization of the field radiated by a transmit antenna is as important as the power density radiated by the antenna. For example, a radio communication link consists of an antenna which is transmitting separated by some distance from an antenna which is receiving. Directivity determines the power density delivered to the receive antenna, but the receive antenna must be co-polarized with the arriving wave in order to capture all of this power.

The radiation pattern concept is perhaps best explained by example. The simplest antenna encountered in common practice is the electrically-short dipole (ESD), which consists of a straight wire of length \(L\) that is much less than one-half of a wavelength. In Section 9.5, it is shown that the field radiated by an ESD which is located at the origin and aligned along the \(z\)-axis is:

Co-pol is commonly defined to be the intended or nominal polarization for a particular application, which is not necessarily the actual polarization radiated by the antenna under consideration. Cross-pol measures polarization in the orthogonal plane; i.e., deviation from the presumed co-pol.

The E-plane is any plane in which the nominal or intended vector \(\widetilde{\bf E}\) lies.

Since the ESD is \(\hat{\bf \theta}\)-polarized, the E-plane pattern of the ESD is simply:

This pattern is shown in Figure \(\PageIndex{1}\). Similarly, we define the H-plane as follows:

The H-plane is any plane in which the nominal or intended vector \(\widetilde{\bf H}\) lies, and so is perpendicular to both the E-plane and the direction of propagation. 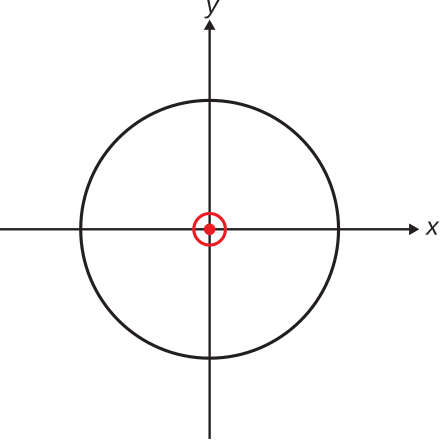 Figure \(\PageIndex{2}\): H-plane co-pol pattern for the zˆ-oriented ESD. In the unnormalized pattern scaling, the radius of the circle is the maximum value of Equation \ref{m0205_eEESD}. ( CC BY-SA 4.0; S. Lally)

It is often useful to normalize the pattern, meaning that we scale the pattern so that its maximum magnitude corresponds to a convenient value. There are two common scalings. One common scaling sets the maximum value of the pattern equal to 1, and is therefore independent of source magnitude and distance. This is referred to as the normalized pattern. The normalized co-pol pattern can be defined as follows:

where \(\hat{\bf e}\) is the co-pol reference direction, and the denominator is the maximum value of the electric field at distance \(r\).

A normalized pattern is scaled to a maximum magnitude of 1, using the definition expressed in Equation \ref{m0205_eNormPat}.

Note that the value of \(r\) is irrelevant, since numerator and denominator both scale with \(r\) in the same way. Thus, the normalized pattern, like directivity, does not change with distance from the antenna.

where \(D_{max}\) is the directivity in whichever direction it is maximum. For the ESD considered previously, \(D_{max}=1.5\) (Section 10.7). Therefore, the co-pol pattern of the ESD using this particular scaling is

Nearly all antennas in common use exhibit directivity that is greater than that of the ESD. The patterns of these antennas subsequently exhibit more complex structure. Figure \(\PageIndex{3}\) shows an example. When the main lobe is narrow, it is common to characterize the pattern in terms of half-power beamwidth (HPBW). This is shown in Figure \(\PageIndex{4}\). HPBW is the width of the main lobe measured between two points at which the directivity is one-half its maximum value. As a pattern metric, HPBW depends on the plane in which it is measured. In particular, HPBW may be different in the E- and H-planes. For example, the E-plane HPBW of the ESD is found to be \(90^{\circ}\), whereas the H-plane HPBW is undefined since the pattern is constant in the H-plane.

An omnidirectional antenna, such as the ESD, exhibits constant and nominally maximum directivity in one plane.

An isotropic antenna exhibits constant directivity in every direction. Such an antenna is not physically-realizable, but is nevertheless useful as a baseline for describing other antennas.