Let us suppose that, by dint of great labour and overcoming many obstacles, we have finally designed a lens system that is free from chromatic aberration, spherical aberration, astigmatism, coma and curvature of field, or at least have minimized these aberrations or have come to a tolerable compromise for a particular purpose, can we at last relax? Unfortunately, no, we cannot. The magnification of an image is image distance divided by object distance, and image distance is different off-axis than on-axis, so the image magnification varies with distance from the axis. This means that the image of an object like this: 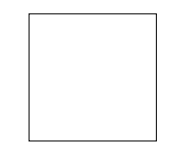 If the distortion is quite small, it may not be noticed in ordinary pictorial photography, but if one is using a photograph for precise positional measurements (for example, in astrometry) it is necessary to correct for the distortion. Often barrel distortion is introduced into a lens system if a stop is placed in front of a lens, while pincushion distortion results if a stop is placed behind a lens. The drawing below, in which I have exaggerated the situation by drawing a very small stop, may explain the reason why. I have placed the object at twice the focal distance from the lens, so that, on axis, the image and object distances are equal, and the magnification is unity. A symmetric air-spaced doublet with a stop half way between the two components minimises distortion.