We also pointed out that, in an isolated system any spontaneous transfer of heat from one part to another part was likely (very likely!) to be from a hot region to a cooler region, and that this was likely (very likely!) to result in an increase of entropy of the closed system − indeed of the Universe. We considered a box divided into two parts, with a hot gas in one and a cooler gas in the other, and we discussed what was likely (very likely!) to happen if the wall between the parts were to be removed. We considered also the situation in which the wall were to separate two gases consisting or red molecules and blue molecules. The two situations seem to be very similar. A flow of heat is not the flow of an “imponderable fluid” called “caloric”. Rather it is the mixing of two groups of molecules with initially different characteristics (“fast” and “slow”, or “hot” and “cold”). In either case there is likely (very likely!) to be a spontaneous mixing, or increasing randomness, or increasing disorder or increasing entropy. Seen thus, entropy is seen as a measure of the degree of disorder. In this section we are going to calculate the increase on entropy when two different sorts of molecules become mixed, without any reference to the flow of heat. This concept of entropy as a measure of disorder will become increasingly apparent if you undertake a study of statistical mechanics.

Now remove the partition, and wait until the gases become completely mixed, with no change in pressure or temperature. The partial molar Gibbs function of gas 1 is

and the partial molar Gibbs function of gas 2 is

Here the pi are the partial pressures of the two gases, given by and p1 = n1P, p2 = n2P where the ni are the mole fractions.

This represents a decrease in the Gibbs function, because the mole fractions are less than 1.

This is positive, because the mole fractions are less than 1.

Similar expressions will be obtained for the increase in entropy if we mix several gases.

Here’s maybe an easier way of looking at the same thing. (Remember that, in what follows, the mixing is presumed to be ideal and the temperature and pressure are constant throughout.)

Here is the box separated by a partition: We initially introduced the idea of entropy in Chapter 7 by saying that if a quantity of heat dQ is added to a system at temperature T, the entropy increases by dS = dQ/T. We later modified this by pointing out that if, in addition to adding heat, we did some irreversible work on the system, that irreversible work was in any case degraded to heat, so that the increase in entropy was then dS = (dQ + dWirr)/T. We now see that the simple act of mixing two or more gases at constant temperature results in an increase in entropy. The same applies to mixing any substances, not just gases, although the formula −NR[n1 ln n1 + n2 ln n2] applies of course just to ideal gases. We alluded to this in Chapter 7, but we have now placed it on a quantitative basis. As time progresses, two separate gases placed together will spontaneously and probably (very probably!) irreversibly mix, and the entropy will increase. It is most unlikely that a mixture of two gases will spontaneously separate and thus decrease the entropy.

Gibbs’ Paradox arises when the two gases are identical. The above analysis does nothing to distinguish between the mixing of two different gases and the mixing of two identical gases. If you have two identical gases at the same temperature and pressure in the two compartments, nothing changes when the partition is removed – so there should be no change in the entropy. Within the confines of classical thermodynamics, this remains a paradox – which is resolved in the study of statistical mechanics. 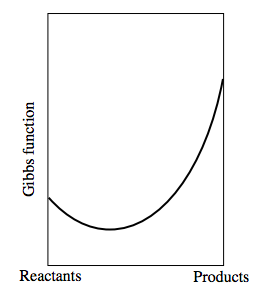 If the Gibbs function of the reactants were greater than that of the products, the graph would look something like: