(This section is a little out of order, and might be better read after Section 17.3.)

If two metals are melted together, and subsequently cooled and solidified, interesting phenomena occur. In this section we look at the way tin and lead mix. I do this in an entirely schematic and idealized way. The details are bit more complicated (and interesting!) than I present them here. For the detailed description and more exact numbers, the reader can refer to the specialized literature, such as Constitution of Binary Alloys by M. Hansen and K. Anderko and its subsequent Second Supplement by F. A. Shunk. In my simplified description I am assuming that when tin and lead are melted, the two liquids are completely miscible, but, when the liquid is cooled, the two metals crystallize out separately. The phenomena are illustrated schematically in the figure below, which is a graph of melting point versus composition of the alloy at a given constant pressure (one atmosphere). 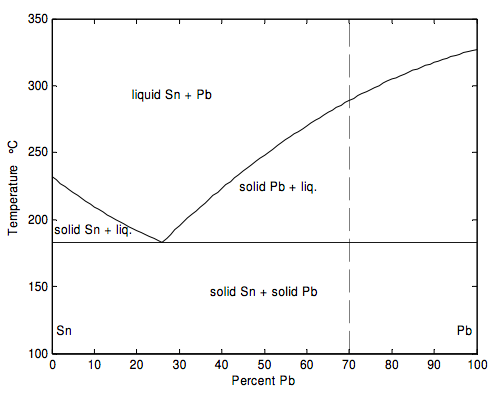 In studying the diagram, let us start at the upper end of the dashed line, where the temperature is 350 ºC and we are dealing with a mixture of 70 percent Pb and 30 percent Sn (by mole – that is to say, by relative numbers of atoms, not by relative mass). If you review the definitions of phase, component, and degrees of freedom, and the Gibbs phase rule, from Section 17.3, you will agree that there is just one phase and one component (there’s no need to tell me the percentage of Sn if you have already told me the percentage of Pb), and that you can vary two intensive state variables (e.g. temperature and pressure) without changing the number of phases.

Below, we show similar (highly idealized and schematic) eutectic curves for Pb-Bi and for Bi-Sn. (For more precise descriptions, and more exact numbers, see the literature, such as the references cited above). The data for these three alloys are:

For the pure metals: