If we’re going to use a computer to solve problems in statistical mechanics, there are three basic strategies that we could take. I illustrate them here by showing how they would be applied to the Ising model.

1. Exhaustive enumeration. Just do it! List all the states (microstates, configurations), their associated probabilities, and average over them! Admittedly, there are a lot of states, but computers are fast, right? Let’s see how many states there are. Consider a pretty small problem: a three dimensional Ising model on an 8 × 8 × 8 cube. This system has 512 spins that can be oriented either “up” or “down”, so there are 2512 ≈ 10154 configurations. Suppose that our computer could generate and examine a million configurations per second. . . this is about as fast as is currently possible. Then an exhaustive enumeration would require 10148 seconds to do the job. By contrast, the universe is about 1018 seconds old. So for one computer to do the problem it would take 10130 times the age of the universe. Now this is impractical, but maybe we could do it by arranging computers in parallel. Well, there are about 1080 protons in the universe, and if every one were to turn into a spiffy Unix workstation, it would still require 1050 times the age of the universe to complete the list. And this is for a small problem! Sorry, computers aren’t fast, and they never will be fast enough to solve the complete enumeration problem. It is not for nothing that this technique is called exhaustive enumeration.

3. Importance sampling. This strategy is to sample the pool of possible configurations not completely at random, but in such a way that the most likely configurations are most likely to be sampled. An enormously successful algorithm to perform importance sampling was developed by Nick Metropolis and his coworkers Arianna Rosenbluth, Marshall Rosenbluth, Augusta Teller, and Edward Teller (of hydrogen bomb fame) in 1953. (“Equation of state calculations by fast computing machines”, J. Chem. Phys. 21 1087–1092.) It is called “the Metropolis algorithm”, or “the M(RT)2 algorithm”, or simply “the Monte Carlo algorithm”. The next section treats this algorithm in detail.

Note that it is possible for two successive configurations in the chain to be identical.

Consider a long chain of Nconfigs configurations, in which the probability of a configuration appearing is given by the Boltzmann distribution. The chain must be “at equilibrium” in that

Two transitions probability rules that do satisfy detailed balance, and the two rules most commonly used in practice, are

where we have taken

and where the normalization constant is fixed so that

If we had to calculate the normalization constant, then we would be back to performing an exhaustive enumeration, so we must find a way to work with unnormalized transition probabilities. To this end we define wa→b as the factor for the transition probability aside from the normalization constant, i.e. the part in curly brackets in equations (9.61) and (9.62). Note that it is a positive number less than or equal to one:

Notice that for any rule satisfying detailed balance the transition probability must increase as the change in energy decreases, suggesting a simple physical interpretation: The chain of configurations is like a walker stepping from configuration to configuration on a “configuration landscape”. If a step would decrease the walker’s energy, he is likely to take it, whereas if it would increase his energy, he is likely to reject it. Thus the walker tends to go downhill on the configuration landscape, but it is not impossible for him to go uphill. This seems like a recipe for a constantly decreasing energy, but it is not, because more uphill steps than downhill steps are available to be taken.3

3This paragraph constitutes the most densely packed observation in this book. It looks backward to the poker paradox, to the definition of temperature, and to the “cash incentives” interpretation of the canonical ensemble. It looks forward to equilibration and to optimization by Monte Carlo simulated annealing. Why not read it again?

From these ingredients, Metropolis brews his algorithm:

Compute wa→b for transition to candidate

With probability wa→b, make the transition

I’ll make three comments concerning this algorithm. First of all, note that the step “With probability wa→b, make the transition” implies that sometimes the transition is not made, in which case two configurations adjacent in the chain will be identical. It is a common misconception that in this case the repeated configuration should be counted only once, but that’s not correct: you must execute the “Gather data concerning configuration” step whether the previous candidate was accepted or rejected.

Secondly, I wish to detail how the step

With probability wa→b, make the transition

is implemented. It is done by expanding the step into the two substeps

IF z < wa→b THEN switch to candidate

Finally, I need to point out that this algorithm does not precisely implement either of the transition probability rules (9.61) or (9.62). For example, if the step “Generate candidate configuration” is done by selecting a single spin to flip, then the algorithm will never step from one configuration to a configuration three spin-flips away, regardless of the value of ∆E. Indeed, under such circumstances (and if there are N spins in the system), the transition probability rule is

It is easy to see that this transition probability rule satisfies detailed balance.

It is not atypical to run a Monte Carlo program for about 10,000 Monte Carlo steps per site. As such, the program might run for hours or even days. This is considerably less than the age of the universe, but probably far longer than you are used to running programs. The following tips are useful for speeding up or otherwise improving programs implementing the Metropolis algorithm.

1. Use scaled quantities. The parameters J, m, H, and T do not enter in any possible combination, but only through two independent products. These are usually taken to be

Thus the Boltzmann exponent for a given configuration is

2. Don’t find total energies. To calculate wa→b you must first know ∆E, and the obvious way to find ∆E is to find Eb and Ea (through equation (9.68)) and subtract. This way is obvious but terribly inefficient. Because the change in configuration is small (usually a single spin flip) the change in energy can be found from purely local considerations without finding the total energy of the entire system being simulated. Similarly, if you are finding the average (scaled) magnetization

(as suggested by the square brackets in the algorithm on page 202) you don’t need to scan the entire lattice to find it. Instead, just realize that it changes by ±2 with each spin flip.

3. Precompute Boltzmann factors. It is computationally expensive to find evaluate a exponential, yet we must know the value of e−β∆E. However, usually there are only a few possible values of ∆E. (For example in the square lattice Ising model with nearest neighbor interactions and a field, a single spin flip gives rise to one of only ten possible values of the energy change.) It saves considerable computational time (and often makes the program clearer) to precalculate the corresponding values of wa→b just once at the beginning of the program, and to store those values in an array for ready reference when they are needed.

4. Average “on the fly”. The algorithm on page 202 finds the average (scaled) magnetization by summing the magnetization of each configuration in the chain and then dividing by the number of configurations. Because the chain is so long this raises the very real possibility of overflow in the value of Msum. It is often better to keep a running tally of the average by tracking the “average so far” through

or (identical mathematicall but preferable for numerical work)

(I use the notation of Fortran 90. If you are familiar with some other computer language, the intent should nevertheless be clear.) If the spin at site (3,2) is up, then Spin(3,2) = +1, and if that spin is down, then Spin(3,2) = −1. The lattice sites are labeled as shown in this figure: 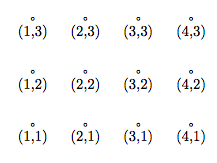 Although this representation is obvious, it suffers from a number of defects. First, it is difficult to generalize to other lattices, such as the triangular lattice in two dimensions or the face-centered cubic lattice in three dimensions. Second, finding the nearest neighbors of boundary sites using periodic or skew-periodic boundary conditions is complicated. And finally because the array is two-dimensional, any reference to an array element involves a multiplication,4 which slows down the finding of data considerably.

All of these defects are absent in the folded array representation of the lattice sites. In this representation the sites are stored as an integer-valued one-dimensional array declared through

Now the lattice sites are labeled as: It is not hard to show that, with skew-periodic boundary conditions, the four neighbors of site number l (l for location) are

Unfortunately, the Fortran Mod function was inanely chosen to differ from the mathematical mod function, so this arithmetic must be implemented through

7. Random number generators. It is hard to find an easy source of high-quality random numbers: this is a problem for physics, also for government and industry.

In 1989 Ulli Wolff proposed an algorithm for Monte Carlo simulation that is particularly effective near critical points. (U. Wolff, Phys. Rev. Lett., 62 (1989) 361–364.) The next page presents the Wolff algorithm as applied to the zero-field ferromagnetic nearest-neighbor Ising model,

on a square lattice or a simple cubic lattice.

FOR each previous generation member i of the cluster DO

FOR each neighbor j of i DO

Summarize and print out results

Demonstration of detailed balance. In these formulas,

and detailed balance is insured.