A common mistake involving conservation of momentum crops up in the case of totally inelastic collisions of two objects, the kind of collision in which the two colliding objects stick together and move off as one. The mistake is to use conservation of mechanical energy rather than conservation of momentum. One way to recognize that some mechanical energy is converted to other forms is to imagine a spring to be in between the two colliding objects such that the objects compress the spring. Then imagine that, just when the spring is at maximum compression, the two objects become latched together. The two objects move off together as one as in the case of a typical totally inelastic collision. After the collision, there is energy stored in the compressed spring so it is clear that the total kinetic energy of the latched pair is less than the total kinetic energy of the pair prior to the collision. There is no spring in a typical inelastic collision. The mechanical energy that would be stored in the spring, if there was one, results in permanent deformation and a temperature increase of the objects involved in the collision.

Momentum has direction. Its direction is the same as that of the velocity. In this chapter we will limit ourselves to motion along a line (motion in one dimension). Then there are only two directions, forward and backward. An object moving forward has a positive velocity/momentum and one moving backward has a negative velocity/momentum. In solving physics problems, the decision as to which way is forward is typically left to the problem solver. Once the problem solver decides which direction is the positive direction, she must state what her choice is (this statement, often made by means of notation in a sketch, is an important part of the solution), and stick with it throughout the problem.

The concept of momentum is important in physics because the total momentum of any system remains constant unless there is a net transfer of momentum to that system, and if there is an ongoing momentum transfer, the rate of change of the momentum of the system is equal to the rate at which momentum is being transferred into the system. As in the case of energy, this means that one can make predictions regarding the outcome of physical processes by means of simple accounting (bookkeeping) procedures. The case of momentum is complicated by the fact that momentum has direction, but in this initial encounter with the conservation of momentum you will deal with cases involving motion along a straight line. When all the motion is along one and the same line, there are only two possible directions for the momentum and we can use algebraic signs (plus and minus) to distinguish between the two. The principle of Conservation of Momentum applies in general. At this stage in the course however, we will consider only the special case in which there is no net transfer of momentum to (or from) the system from outside the system.

Conservation of Momentum in One Dimension for the Special Case in which there is No Transfer of Momentum to or from the System from Outside the System.

In any process involving a system of objects which all move along one and the same line, as long as none of the objects are pushed or pulled along the line by anything outside the system of objects (it’s okay if they push and pull on each other), the total momentum before, during, and after the process remains the same.

Upon reading this selection you'll be expected to be able to apply conservation of momentum to two different kinds of processes. In each of these two classes of processes, the system of objects will consist of only two objects. In one class, called collisions, the two objects bump into each other. In the other class, anti-collisions the two objects start out together, and spring apart. Some further breakdown of the collisions class is pertinent before we get into examples. The two extreme types of collisions are the completely inelastic collision, and the completely elastic collision.

In applying conservation of momentum one first sketches a before and an after picture in which one defines symbols by labeling objects and arrows (indicating velocity), and defines which direction is chosen as the positive direction. The first line in the solution is always a statement that the total momentum in the before picture is the same as the total momentum in the after picture. This is typically written by means an equation of the form:

We'll use the examples to clarify what is meant by collisions and anti-collisions; to introduce one more concept, namely, relative velocity (sometimes referred to as muzzle velocity); and of course, to show the reader how to apply conservation of momentum. 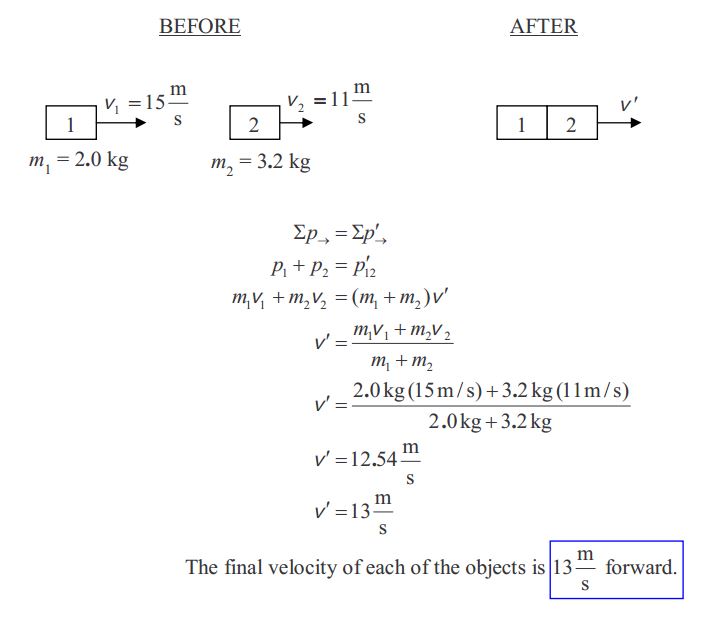