In that two of our five senses (sight and sound) depend on our ability to sense and interpret waves, and in that waves are ubiquitous, waves are of immense importance to human beings. Waves in physical media conform to a wave equation that can be derived from Newton’s Second Law of motion. The wave equation reads:

\(y\) is the displacement of a point on the medium from its equilibrium position,
\(x\) is the position along the length of the medium,
\(t\) is time, and
\(v\) is the wave velocity.

In general, when the analysis of a continuous medium, e.g. the application of Newton’s second law to the elements making up that medium, leads to an equation of the form

the constant will be an algebraic combination of physical quantities representing properties of the medium. That combination can be related to the wave velocity by

For instance, application of Newton’s Second Law to the case of a string results in a wave equation in which the constant of proportionality depends on the linear mass density \(\mu\) and the string tension \(F_T\):

Recognizing that the constant of proportionality \(\frac{\mu}{F_T}\) has to be equal to the reciprocal of the square of the wave velocity, we have

a necessary condition for the wave function to actually solve the wave equation. \(v=\frac{\lambda}{T}\) is the statement that the wave speed is equal to the ratio of the wavelength to the period, a relation that we derived in a conceptual fashion in the last chapter.

The phase of the cosine boils down to the phase constant \(\phi\) whose value thus determines the value of \(y\) at \(x=0\), \(t=0\). (Note that the “phase” of the cosine is the argument of the cosine—that which you are taking the cosine of.) The value of the phase constant \(\phi\) is of no relevance to our present discussion so we arbitrarily set \(\phi = 0\). Also, on your formula sheet, we write the wave function only for the case of a wave traveling in the \(+x\) direction, that is, we replace the “\(\pm\)” with a “\(-\)” . The wave function becomes The phenomenon in which waves traveling in different directions simultaneously arrive at one and the same point in the wave medium is referred to as interference. When the waveforms add together to yield a bigger waveform, the interference is referred to as constructive interference. When the two waveforms tend to cancel each other out, 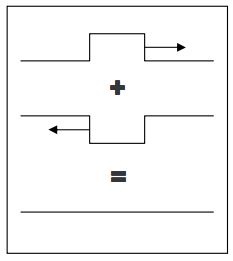 Reflection of a Wave from the End of a Medium

Upon reflection from the fixed end of a string, the displacement of the points on a traveling waveform is reversed.

The fixed end, by definition, never undergoes any displacement.

Now we consider a free end. A fixed end is a natural feature of a taut string. A free end, on the other hand, an idealization, is at best an approximation in the case of a taut string. We approximate a free end in a physical string by means of a drastic and abrupt change in linear density. Consider a rope, one of which is attached to the wave source, and the other end of which is attached to one end of a piece of thin, but strong, fishing line. Assume that the fishing line extends through some large distance to a fixed point so that the whole system of rope plus fishing line is taut. A wave traveling along the rope, upon encountering the end of the rope attached to the thin fishing line, behaves approximately as if it has encountered a free end of a taut rope.

In the case of sound waves in a pipe, a free end can be approximated by an open end of the pipe.

Enough said about how one might set up a physical free end of a wave medium, what happens when a wave pulse encounters a free end? The answer is, as in the case of the fixed end, the waveform is reflected, but this time, there is no reversal of displacements.

It might seem that it would be a daunting task to determine the frequencies that result in standing waves. Suppose you want to investigate whether a point on a string could be an antinode. Consider an instant in time when a wave crest is at that position. You need to find the conditions that would make it so that in the time it takes for the crest to travel to one fixed end of the string, reflect back as a trough and arrive back at the location in question; a trough, e.g. one that was trailing the original crest, propagates just the right distance so that it arrives at the location in question at the same time. As illustrated in the next chapter, the analysis that yields the frequencies of standing waves is easier than these timing considerations would suggest.