We use the symbol

We are now ready to consider the following simple circuit:

Here it is again without so many labels: 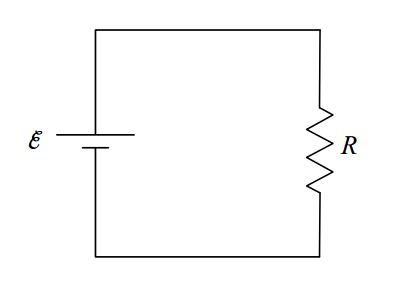 In order to maintain the potential difference \(\varepsilon\) between the two conductors, the seat of EMF causes there to be a minuscule amount of positive charge on the upper wire and the same amount of negative charge on the lower wire. This charge separation causes an electric field in the resistor. (We carry out this argument in the positive charge carrier model. While it makes no difference for the circuit, as a point of fact, it is actually negatively charged particles moving in the opposite direction. The effect is the same.)

It is important to realize that every part of the circuit is chock full of both kinds of charge. The wire, the resistor, everything is incredibly crowded with both positive and negative charge. One kind of charge can move against the background of the other. Now the electric field in the resistor pushes the positive charge in the resistor in the direction from the higher-potential terminal toward the lower-potential terminal. The rate at which charge crosses that line is the charge flow rate at that point (the point at which you drew the dotted line) in the circuit. The charge flow rate, how many coulombs-of charge per-second are crossing that line is called the electric current at that point. In the case at hand, because the whole circuit consists of a single loop, the current is the same at every point in the circuit—it doesn’t matter where you “draw the line.” The symbol that one typically uses to represent the value of the current is \(I\).

In analyzing a circuit, if the current variable is not already defined for you, you should define it
by drawing an arrow on the circuit and labeling it \(I\) or \(I\) with a subscript. 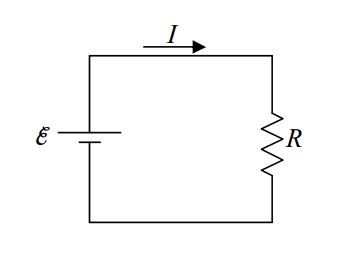 The units for current are coulombs per second (\(C/s\)). That combination of units is given a name: the ampere, abbreviated \(A\).

Consider the resistor in the simple circuit we have been dealing with. Summarizing: When you put a voltage across a resistor, there is a current in that resistor. The ratio of the voltage to the current is called the resistance of the resistor.

If the material of which the resistor is made obeys Ohm’s Law, then the resistance \(R\) is a constant, meaning that its value is the same for different voltages. The relation \(R=\frac{V}{I}\) is typically written in the form \(V=IR\).

Ohm’s Law is good for resistors made of certain materials (called ohmic materials) over a limited range of voltages.

Given that the resistance of a resistor is defined as the ratio of the voltage across that resistor to the resulting current in that resistor,

it is evident that the unit of resistance is the volt per ampere, \(\frac{V}{A}\). This combination unit is given a name. We call it the ohm, abbreviated \(\Omega\), the Greek letter upper-case omega.