In the next chapter, we exploit the fact that if you know the electric potential throughout a region in space, you can use that knowledge to determine the electric field in that region of space.

Let’s kick things off by doing a review problem involving a discrete distribution of charge. Please solve the following example problem and then check your work against my solution which follows the problem statement. We call the distance from the positive charge to point \(P\), \(r_{+}\), and, we call the distance from the negative charge to point \(P\), \(r_{-}\). The electric potential due to a single point charge is given by \(\phi=\frac{kq}{r}\). Also, the contributions to the electric potential at one point in space due to more than one point charge simply add like numbers. So, we have:

But, from the diagram: we can determine that:

and from the diagram: 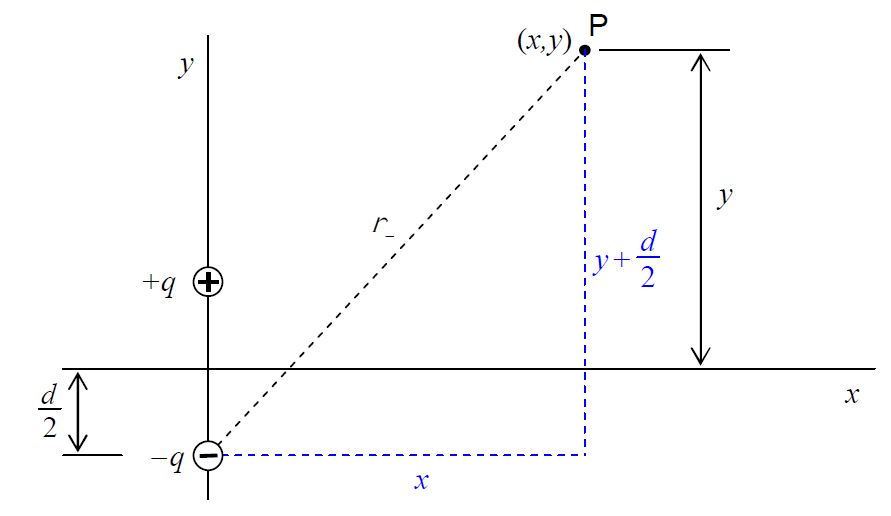 we can see that:

That’s enough review. Please keep that \(\phi=\frac{kq}{r}\) formula in mind as we move on to the new stuff. Also keep in mind the fact that the various contributions to the electric potential at an empty point in space simply add (like numbers/scalars rather than like vectors).

The “new stuff” is the electric potential due to a continuous distribution of charge along a line segment. What we are dealing with is some line segment of charge. It can be anywhere, in any orientation, but for concreteness, let’s consider a line segment of charge on the \(x\) axis, say from some \(x=a\) to \(x=b\) where \(a<b\). Furthermore, let’s assume the linear charge density (the chargeper- length) on the line segment to be some function \(\lambda(x′)\). The idea is to treat the charge distribution as an infinite set of point charges where each point charge may have a different charge value dq depending on where (at what value of \(x′\)) it is along the line segment. A particular infinitesimal segment of the line of charge, a length \(dx′\) of the line segment, will make a contribution

to the electric field at point \(P\).

The amount of charge, dq, in the infinitesimal segment dx′ of the line of charge is just the chargeper-length \(\lambda(x′)\) (the linear charge density) times the length \(dx′\) of the segment. That is to say that \(dq=\lambda(x')dx'\). Substituting this into \(d\phi=\frac{kdq}{r}\) yields:

Applying the Pythagorean theorem to the triangle in the diagram: