When asked to find the electric flux through a closed surface due to a specified non-trivial charge distribution, folks all too often try the immensely complicated approach of finding the electric field everywhere on the surface and doing the integral of \(\vec{E}\) dot \(\vec{dA}\) over the surface instead of just dividing the total charge that the surface encloses by \(\epsilon _{o}\).

Conceptually speaking, Gauss’s Law states that the number of electric field lines poking outward through an imaginary closed surface is proportional to the charge enclosed by the surface.

A closed surface is one that divides the universe up into two parts: inside the surface, and, outside the surface. An example would be a soap bubble for which the soap film itself is of negligible thickness. I’m talking about a spheroidal soap bubble floating in air. Imagine one in the shape of a tin can, a closed jar with its lid on, or a closed box. These would also be closed surfaces. To be closed, a surface has to encompass a volume of empty space. A surface in the shape of a flat sheet of paper would not be a closed surface. In the context of Gauss’s law, an imaginary closed surface is often referred to as a Gaussian surface.

The following diagram might make our conceptual statement of Gauss’s Law seem like plain old common sense to you: 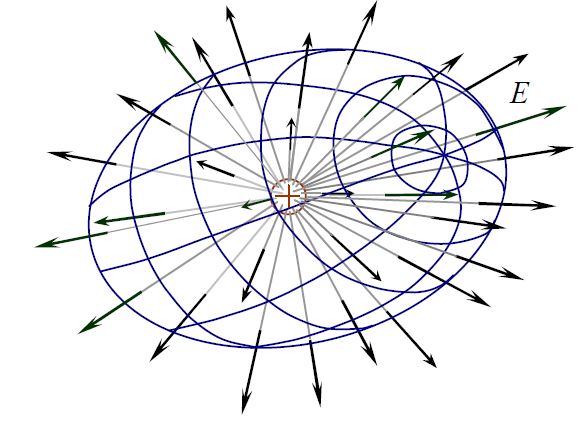 Our conceptual idea of the net number of electric field lines poking outward through a Gaussian surface corresponds to the net outward electric flux \(\Phi_{E}\) through the surface. 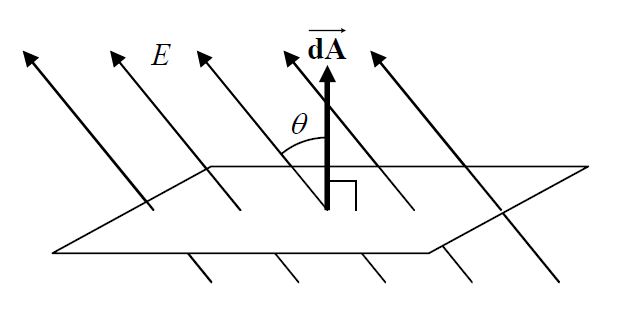 Now, the flux is the quantity that we can think of conceptually as the number of field lines. So, in terms of the flux, Gauss’s Law states that the net outward flux through a closed surface is proportional to the amount of charge enclosed by that surface. Indeed, the constant of proportionality has been established to be \(\frac{1}{\epsilon_0}\) where \(\epsilon_0\) (epsilon zero) is the universal constant known as the electric permittivity of free space. (You’ve seen \(\epsilon_0\) before. At the time, we stated that the Coulomb constant \(k\) is often expressed as \(\frac{1}{4 \pi \epsilon_0}\). Indeed, the identity \(k=\frac{1}{4 \pi \epsilon_0}\) appears on your formula sheet.) In equation form, Gauss’s Law reads:

How You Will be Using Gauss’s Law

Here’s our point charge \(q\), and an assumed tangential component of the electric field at a point \(P\) which, from our perspective is to the right of the point charge.

Now let’s decide on a rotation axis for testing whether the electric field is symmetric with respect to rotation. Almost any will do. I choose one that passes through both the point charge, and, point \(P\).

Now, if I rotate the charge, and its associated electric field, through an angle of \(180 ^{\circ}\) about that axis, I get: 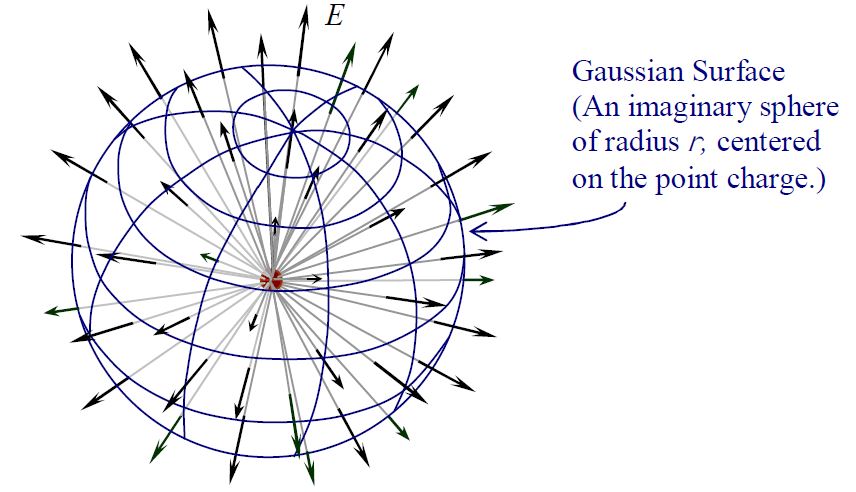 evaluates to \(E\space dA\). So, for the case at hand, Gauss’s Law takes on the form: Okay, we’ve left that right side alone for long enough. We’re talking about a point charge \(q\) and our Gaussian surface is a sphere centered on that point charge \(q\), so, the charge enclosed, \(Q_{\mbox{enclosed}}\) is obviously \(q\). This yields:

It’s clear that, by means of our first example of Gauss’s Law, we have derived something that you already know, the electric field due to a point charge.