3.2 You push a box of mass m up a slope with angle \(\theta\) and kinetic friction coefficient \(\mu\). Find the minimum initial speed v you must give the box so that it reaches a height h.

3.3 A uniform board of length L and mass M lies near a boundary that separates two regions. In region 1, the coefficient of kinetic friction between the board and the surface is \(\mu _1\), and in region 2, the coefficient is \(\mu _2\). Our objective is to find the net work W done by friction in pulling the board directly from region 1 to region 2, under the assumption that the board moves at constant velocity. 3.4 The government wishes to secure votes from car-owners by increasing the speed limit on the highway from 120 to 140 km/h. The opposition points out that this is both more dangerous and will cause more pollution. Lobbyists from the car industry tell the government not to worry: the drag coefficients of the cars have gone down significantly and their construction is a lot more solid than in the time that the 120 km/h speed limit was set.

3.5 Nuclear fusion, the process that powers the Sun, occurs when two low-mass atomic nuclei fuse together to make a larger nucleus, releasing substantial energy. Fusion is hard to achieve because atomic nuclei carry positive electric charge, and their electrical repulsion makes it difficult to get them close enough for the short-range nuclear force to bind them into a single nucleus. The figure below shows the potential-energy curve for fusion of two deuterons (heavy hydrogen nuclei, consisting of a proton and a neutron).The energy is measured in million electron volts (\(MeV, 1 eV=1.6 \cdot 10^{-19} J\)), a unit commonly used in nuclear physics, and the separation is in femtometers (\(1 fm=10^{-15} m\)). 3.6 A pigeon in flight experiences a drag force due to air resistance given approximately by \(F=bv^2\), where v is the flight speed and b is a constant. 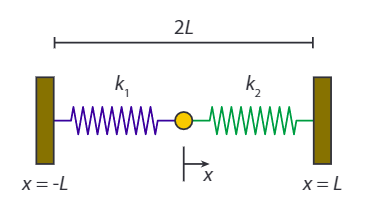 3.9 A block of mass m=3.50 kg slides from rest a distance d down a frictionless incline at angle \(\theta=30.0^\circ\),where it runs into a spring of spring constant 450 N/m. When the block momentarily stops, it has com-pressed the spring by 25.0 cm.

3.10 Playground slides frequently have sections of varying slope: steeper ones to pick up speed, less steep ones to lose speed, so kids (and students) arrive at the bottom safely. We consider a slide with two steep sections (angle \(\alpha\)) and two less steep ones (angle \(\beta\)). Each of the sections has a width L. The slide has a coefficient of kinetic friction \(\mu\).

3.11 In this problem, we consider the anharmonic potential given b

3.12 After you have successfully finished your mechanics course, you decide to launch the book into an orbit around the Earth. However, the teacher is not convinced that you do not need it anymore and asks the following question: What is the ratio between the kinetic energy and the potential energy of the book in its orbit?

Let m be the mass of the book, \(M_{\oplus} \text { and } R_{\oplus}\) the mass and the radius of the Earth respectively. The gravitational pull at distance r from the center is given by Newton’s law of gravitation (Equation 2.2.3):

3.13 Using dimensional arguments, in Problem 1.4 we found the scaling relation of the escape velocity (the minimal initial velocity an object must have to escape the gravitational pull of the planet/moon/other object it’s on completely) with the mass of the radius of the planet. Here, we’ll re-derive the result, including the numerical factor that dimensional arguments cannot give us.

3.14 A cannonball is fired upwards from the surface of the Earth with just enough speed such that it reaches the Moon. Find the speed of the cannonball as it crashes on the Moon’s surface, taking the gravity of both the Earth and the Moon into account. Table B.3 contains the necessary astronomical data.

3.16 A massive cylinder with mass M and radius R is connected to a wall by a spring at its center (see figure).The cylinder can roll back-and-forth without slipping.

3.17 A small particle (blue dot) is placed atop the center of a hemispherical mount of ice of radius R (see figure). It slides down the side of the mount with negligible initial speed. Assuming no friction between the ice and the particle, find the height at which the particle loses contact with the ice.

Hint: To solve this problem, first draw a free body diagram, and combine what you know of energy and forces.

Here \(\kappa\) is the membrane’s bending modulus and \(\sigma\) its surface tension.