Let’s apply the problem-solving strategy in drawing a free-body diagram for a sled. In Figure \(\PageIndex{1a}\), a sled is pulled by force P at an angle of 30°. In part (b), we show a free-body diagram for this situation, as described by steps 1 and 2 of the problem-solving strategy. In part (c), we show all forces in terms of their x- and y-components, in keeping with step 3.

Construct the free-body diagram for object A and object B in Figure 5.32. 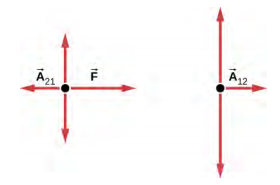 Each block accelerates (notice the labels shown for \(\vec{a}_{1}\) and \(\vec{a}_{2}\)); however, assuming the string remains taut, they accelerate at the same rate. Thus, we have \(\vec{a}_{1}\) = \(\vec{a}_{2}\). If we were to continue solving the problem, we could simply call the acceleration \(\vec{a}\). Also, we use two free-body diagrams because we are usually finding tension T, which may require us to use a system of two equations in this type of problem. The tension is the same on both m1 and m2.

(a) Draw the free-body diagram for the situation shown.

(b) Redraw it showing components; use x-axes parallel to the two ramps.