One very important concept in the physics of sound (and for all of physics) is the law of conservation of energy: Energy cannot be created or destroyed but it can be transformed from one type of energy to another.

You can also trace the original \(10\text{ J}\) back in time before you pushed the spring on the toy gun. The energy for moving your arm came from chemical energy stored in your body. This chemical energy came from the plants and/or animals you ate. That energy can eventually be traced back to the nuclear energy released in the form of electromagnetic waves from the sun. Plants absorbed this light energy to form stored chemical energy for you to eat. Energy was never created or destroyed in any of these conversion steps. The law of conservation of energy is also called the first law of thermodynamics.

There is a second energy law that is also very important but we will not need to know the details of how it works. The second law of thermodynamics says that anytime you change energy from one form to another, some of the energy must (that is the law!) end up in a much less useful form, usually as random thermal energy (heat). When the mechanical energy of bowing a violin is turned into vibrational energy in the strings and then that energy is turned into sound energy in the air, a small amount of the total energy always ends up as heat. The violin and surrounding air will be just a tiny bit warmer. Likewise, amplifiers for radios, stereos and electric guitars give off heat because they are converting electrical energy into sound energy; according to the second law the conversion process has to give off some heat. 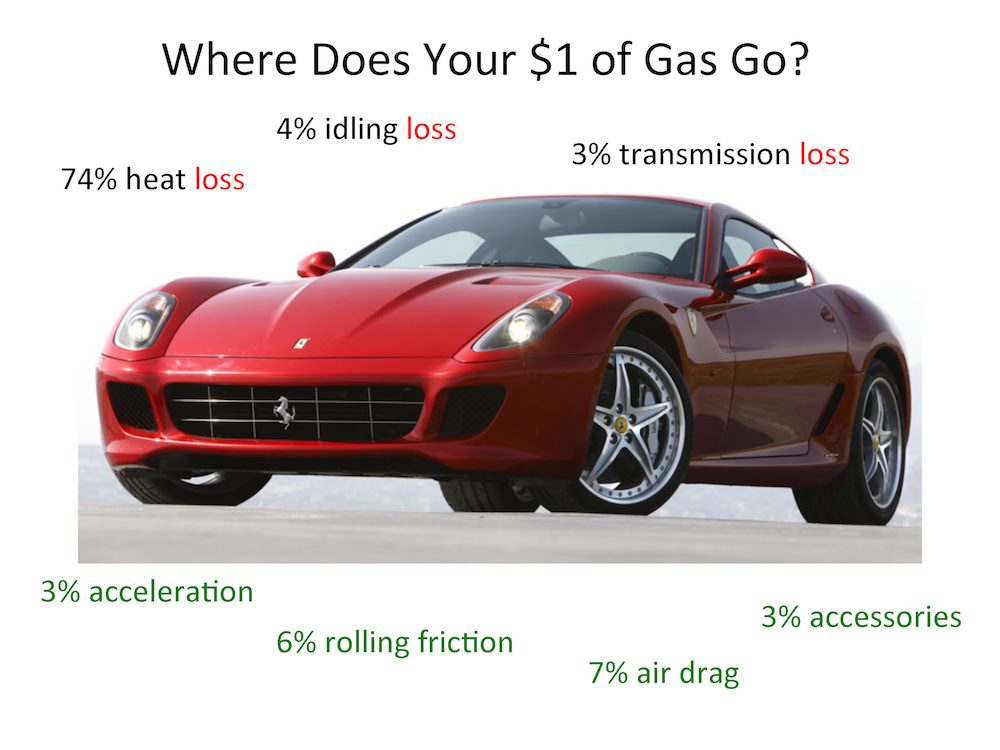 As can be seen in the picture above, as the result of the second law, sometimes the usable energy is only a small fraction of the total energy used. Your car motor is very inefficient, losing about \(74\%\) of the energy as heat. New technology may improve things some but as long as you are burning gasoline the efficiency of a car motor will remain well below \(50\%\) because of the second law of thermodynamics. Many other energy conversion processes are more efficient than process which burn a fuel source. For example, large electric motors and generators can be more than \(90\%\) efficient in converting electrical energy to mechanical energy or vice versa. The second law still applies but the consequence isn't as severe in the case of electrical conversions.