Resonance can occur in any system that has a natural frequency. You probably have experienced a rattle or buzz in your car that only occurs at a certain speed. This is an example of resonance; the tires provide a periodic driving force which changes frequency as you change speed. Various parts of the car have different natural frequencies, particularly parts that have come loose. If the driving frequency of the rotating tires matches the natural frequency these parts will vibrate at a larger amplitude, making a buzz or rattle. Here are some other examples.

You probably have blown across the top of a bottle to get a note. Different sized bottles make different notes and partially filling the bottles with water also changes the pitch. These are examples of Helmholtz resonators; a container of gas with a single opening that will resonate at a specific pitch. Blowing across the top causes a driving force on the air inside which has a natural frequency due to the 'springiness' of the air and the size of the container. As we will see, acoustic stringed instruments such as the guitar consist of a hollow body which acts like a Helmholtz resonator. Here are more details on Helmholtz resonance.

If you have ever been annoyed by a low frequency sound while driving down the highway with one window partially open, you were experiencing a Helmholtz resonance where the air blowing past the open window caused the air inside the car to vibrate.

Resonance also occurs in electrical circuits. In fact this is one way a radio receiver can tune to a certain broadcast frequency. The parameters of the circuit are adjusted so that the circuit has a resonance equal to the frequency of the station you are trying to listen to. With those parameters the circuit has much more current flowing for that particular frequency, thus making current flow for that frequency much larger than any other frequency. Here is a circuit simulation that shows three circuits. The top circuit is being driven below resonance so the current flow is small. The bottom circuit has a driving frequency that is too large. The middle circuit is driven at the resonance frequency of \(41.1\text{ Hz}\) and has the largest current oscillations.

You may have heard the word resonance applied in the medical world. Magnetic Resonance Imaging (MRI) is used in medicine to get images inside the body without doing harm to the living tissue. Every different molecule in the body has a different natural frequency of oscillation. Each molecule also has electrical charges on them so that they can be driven by an oscillating magnetic and electric field (an electromagnetic wave). When the driving frequency of the oscillating magnetic field equals the natural frequency of the molecule, the molecule absorbs the energy and undergoes larger oscillations. This absorbed energy doesn't pass through the body and so is not detected outside after the magnetic field passes through. By changing the driving frequency (the frequency of the electromagnetic wave) it is possible to map the location of different types of molecules in the body, giving a map of the internal structures. This tutorial on MRI gives more details and shows some pictures generated using magnetic resonance imaging. 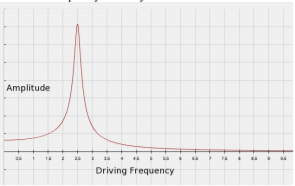