Electromagnetic waves are a type of wave that has two transverse components. A wave in the electric field travels perpendicular and in-phase with a wave in the magnetic field moving at the same speed. Light, X-rays, infrared, ultraviolet, gamma rays, radio signals, wifi signals, Bluetooth signals, cell signals, broadcast TV and radio signals are all electromagnetic. They all travel at the same speed, the speed of light, \(\text{c} = 3.0\times 10^{8}\text{ m/s}\). We will investigate the electromagnetic waves used in transmitting radio and TV in a later chapter. The following is a chart of the electromagnetic spectrum by Victor Blacus (Wikipedia File). 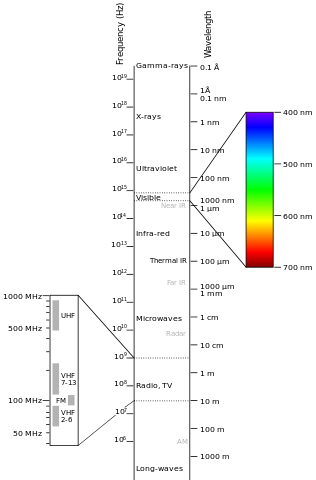 If light and radio are the same thing, why can't we see radio signals? There are two differences between all these types of electromagnetic waves. The first is the frequencies are different for each type (and since \(v=\lambda f\), the wavelengths also have to be different). In general you need an antenna close to the size of the wavelength of the wave in order to detect it. Our eyes have special molecules that are just the right size to detect visible light but not X-rays, cell phone signals or other electromagnetic waves. Car antennas are around a meter or so in length because the wavelength of radio signals is in this range. Cell phone antennas (which are built inside the phone) are a few centimeters in size because this is how big the waves making up the cell phone signal are.

The second difference between different types of electromagnetic waves has to do with the energy of the photon. Einstein proved that the energy of an electromagnetic wave arrives in a single pulse called a photon whose energy is proportional to frequency. The energy of an individual photon for a wave with frequency \(f\) is given by \(E=hf\) where \(h = 6.63\times 10^{-34}\text{J s}\) is Planck's constant. This energy has nothing to do with the brightness (intensity) of the wave, only the frequency. Intensity or brightness is related to amplitude of the wave and the number of photons, not the energy of an individual photon. Each X-ray photon carries lots energy (hence they can penetrate the body and also cause cancer). Cell phone signals and visible light are lower frequency electromagnetic waves and carry less energy per photon (as a result they cannot cause cancer, no matter how intense they are). Electromagnetic waves with frequencies higher than the visible part of the spectrum are said to be ionizing because they have enough energy to ionize (remove an electron) from a molecule. Removing electrons from biological molecules at the wrong time causes them to react differently and this can lead cellular chemistry to become abnormal, sometimes causing cancer.